This system is ready for some speakers. 62/140 rebuilt by AV Options and a CD5x with a relatively new mech. I even have LS35a stands. Tab 10s would be perfect but I have owned them before. Sometimes variety is the spice of life and maybe this is an opportunity to find out why Kans are so legendary.

I have some questions:

Thanks in advance for your knowledge! 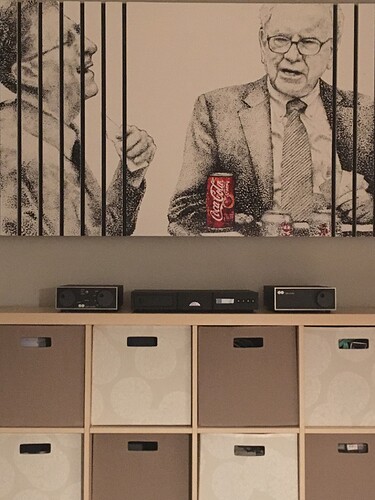 One other question: are the posts the proper width for Naim F plugs?

Adam, that reminds me of my Kans. My dealer at the time was the very wonderful Sound Advice in Loughborough and if just bought my first Naim system. For various reasons the Kans were bought from my previous dealer in Brighton.

On delivery one of the Kans was found to have a non functioning tweeter. Even though I’d not bought the Kans from Sound Advice, Derek was on the phone to Linn and had a new tweeter arrive the next day. He then drove to my student bedsit in Leicester and installed the new tweeter. There is a way of getting the grilles off where you tuck you fingers under the inside edge of the wood that holds them on and then pull really hard. They came off and then went back on and looked perfect. Sound Advice were a simply brilliant dealer. Those Kans lived with me for years, with my LP12 and 42.5, Hicap and 250.

The Linn Kan is good…I am tinkering with a set which I have not had time to finish…but there are some serious short comings with the design. The depth of cabinet…with the simple crossover causes a rising response from the bass mid…which is is not good. Seriously if you want to build a speaker get one of these…I think they would be amazing… Introducing the $199 "Desktop Mini!" - YouTube
Alternatively, you can buy complete finished cabinets for the Kan from Falcon…and buy the drivers and xover parts…

I had Kans, for many years. Mine were from Sound Advice… In fact everything I had, was from there. Until they disappeared… Sound Advice that is - or rather their successors… (I still don’t know, what happened. Something about money…?) Good service, yes.

But since ‘defecting’ to @Cymbiosis - and TomTom - service has continued to be good - as good, if not better… (even on my pre-loved stuff…)

Kans were the first speaker I had in a Naim system and it was a wonderful setup. But you mention T10s, and not wanting more. Owning the ProAcs now I’d suggest that they are a more accomplished speaker and better suited to a CD source. Kans can sound quite shouty and aggressive without a really top source and as you say it’s hard to find a really good pair, which really isn’t surprising for a 40 year old speaker. Find as a refurb project maybe, but for simply enjoying the music the ProAcs are a safer bet. Maybe try the Signature or a different finish, so it’s not simply more of the same.

I bought an old pair of Kans from eBay for my son about 10 years ago. They were a bit scuffed externally, but the drive units and innards were absolutely fine. I filled and sanded the external dings, then gloss varnished the enclosures. That last bit would probably be frowned upon by Linn purists, but the speakers look and sound woderful.

Time flies, Kans and Nytech amp from Radford HiFi in Bristol loved it!

The Kan is a great speaker I love them…the shoutiness is a box ratio issue…as the B110 driver is very close to the unrienforced rear panel…as the volume goes up so does the reflected wave coming through the driver cone. This was not a problem for the LS35A as the super complex crossover dialed out the shoutiness… and used thin ply and well damped cabinet…

Kans wwre great, back in the day, with a LP12 to feed them - ans of course, Naim amps…

But… arguably… in the CD era. they are maybe a bit unforgiving…? Harsh…? I swapped mine out for Royd Doublets… and more recently the Royds were swapped, for Kudos X3’s…

Derek sold me my first “proper” stereo system, first Naim kit and also a pair of Kans too

Kans still running, with digital stream and hicap/xs2. Great in a small medium room, a bit thin and extended in a larger space as the volume goes up.

Activated a pair of Kans for my brother. With older models often the glue gives up, indeed the blob of bluetack is indicative of this! 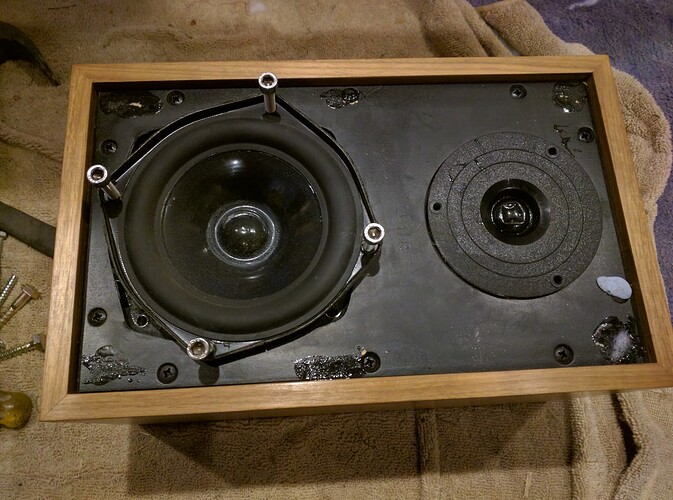 Both drive units are sealed in with Silicone. Here I used oversized screws to tap into the frame of the drivers and incrementally tease them out.

New drive units were fitted, sourced by my brother so they’ll be appropriate for this particular vintage. 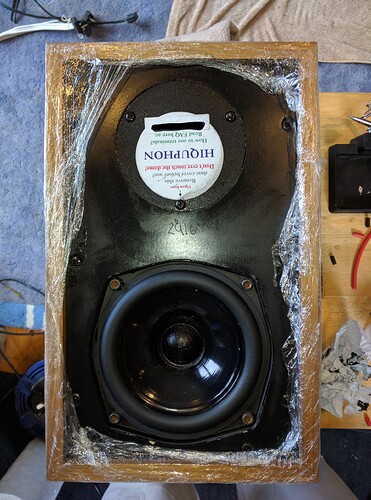 Nice to read others have benefited from Sound Advice too, in the past.
Derek was such and interesting character.

Bought my much loved Epos ES14’s from Derek, back in the late eighties.
The old factory building was such a nice place for a hi-fi dealership.
My LP12 also came from Sound Advice.

After Sound Advice ended, Derek - just himself - set up again as “New Audio Frontiers”, the other side of Loughborough, converting a larger residential home, not far from the town centre. From memory, he used one room for demo’, another room for workshop, then two more ground floor rooms as record storage. I remembered being so impressed by the sheer volume of his vinyl collection, floor to near ceiling racks all over the place. NAF was run on a more “one to one” - book an appointment - style of doing things. He eventually retired and the same property was taken over by a firm of accountants or solicitors or something.

Apologies for going off topic. It was just nice to read about Sound Advice again. Happy days.
Back to Linn Kan’s…

@ratrat - I found NAF to be a virtual ‘clone’ of Sound Advice - or perhaps Sound Advice as it was it it early days. By appointment only. As you say…

And yes, several rooms at NAF were just Records… The front room was the dem space.

I understood that NAF went bankrupt - and DPW then set up again as Eye HiFi - still listed by Pear Audio, the DV distributors. Just an email & a mobile number - Loughborough. Mysterious…

A pair of Spendor 4/5s would be an easier option.

I followed Derek from “Sound Advice” to “New Audio Frontiers” and got all my kit off him, including Linn/Naim 6 pack isobarik system. One of the reasons he left N.A.F. was because they wanted to nearly double his rates, so he moved to Shepshed which as far as i know is still there.