I’ve been evaluating the refresh of a family room AV system and have pondered a number of options. I have an ageing if still capable Arcam AV amp used for a mix of 2 channel and multichannel duties and in evaluating refresh options began looking at how best to consolidate on overall system complexity whilst having some flexibility in system setup and longer term evolution.
I did initially look at adding in a Uniti Nova and then later replacing the Arcam AV amp with a modern equivalent and using the Nova for L/R Front Channels, feeding them from the RCA output for L/R on the the AV amp. This would cover most scenarios and music streaming services as well as Roon and also give a means to sort out the AV side with better cabling and wider codec support.
I had a chance dealer conversation (my longterm Naim dealer, UK) and they pointed out the Linn Selekt DSM as this gave me a one box solution that was modular and that enabled me to add in support for a setup up to 5.1 and if desired a means to support an active setup based on Exakt, although the suggestion seemed to be to avoid that entirely and drive passive speakers directly from the amps on the Selekt DSM.
I was looking for opinions and insight from any forum members who have a similar setup and if they felt it was a good overall solution both in terms of consolidating complexity and overall sonic performance.
Any thoughts or views at this stage appreciated. I’m going to go and have a look and listen to a 2 channel configuration unit with a mind to starting with that and adding in the surround support as and when.

Hello Mr. M–going thru somewhat the same thing myself. I have Apogee Scintillas for my Main system. I was smitten by the large number of Meridian Surround Processors on the bay, and that got me going in that direction. Ended up buying an Ex Demo G65/722 processor–its a current model and a bit more expensive than the Bay offerings, but I get my Dealer Support which is important to me for HT. Mated that up with a pair of DSP3200’s off the Bay, and a pair of M-6’s from a private party for the side/surrounds. The G65 has speaker link and the speakers all have built in DSP amps. This definitely keeps the box count low. I was advised to either have all the same brand or character speakers, and the Meridians and the Apogees seemed to do that. In addition, Meridian seems to be very experienced in HT. This allows me to keep my main system as 2 channel, and add the others for HT/DVD/etc. Just taking delivery of the last pieces today, so have no idea how it will sound, but my expectation bias suggests that I will love it. I am still agonizing on how deep to go for the center channel.

Not familiar with the Linn offering, but I am sure that with their reputation, its good. Interested to find what you do. It would be nice to have an active HT Forum going–for folks who are 2 channel devotees but want to dip their toes into HT.

Appreciate your thoughts, those speakers you have look pretty special too!
I’m drawn to the Linn option as it means I can do what I need in one box I can grow in to ultimately. Inevitably I could squeeze more performance/engagement/resolution with more
boxes and a similar budget but realistically with a 2 and 4 year old child to factor in and the fact it’ll mostly be used for listening to the radio or watching cartoons, I’m all for a simple and low complexity life

Perhaps @Tonym could comment pretty sure he recently upgraded to a new Arcam AV amp?

I’m going to have a look and listen at the Linn box next week, they have a demo unit looking for a home with a deal to be done. It’s not exactly budget concious time you factor in all the modules to get it to a fully loaded unit but it is something I can grow in to and means I can do it all in one box that’s family friendly, ultimately it does more than a Uniti Nova is designed for and has a lot of nice features you’d typically associate with something like a Nova such as Tidal/Qobuz and Roon support hence the appeal. It also has a MM/MC phono stage by default as a bonus.

I think Tony bought a new Arcam to replace an older Arcam, so i thought he might have a useful view. Not many on the forum seem to have both hifi and AV system. But best of luck whatever you do.

Yes seems not so many have an AV mix or as is my case another setup in another room.
It’s a bit of a minefield when it comes to AV amps, bit like picking the right Ethernet cable, ahem…

I have a separate HT system based on Primare and Sonus Faber, 5+1. Recently I made an update adding streaming functions to my AV processor with Primare NP5 Prisma. This way I can stream or play HiRes files up to 192 kHz from MacMini & Audirvana+ over ethernet Cat6a BJC. Which is OK for me and it’s an improvement over Apple TV.
Regarding the HT recommendations it’s not easy. There are so many options. And it depends what exactly you want to achieve/improve by refreshing. 5+1, 7+1, 9+1…, Dolby Atmos. If you want to add streaming capabilities there are some small device solutions from Primare (NP5 Prisma), Meridian (210 Streamer), Arcam (Solo Uno) etc.

Regarding the choice of speakers - again so many options.

Appreciate your thoughts and suggestions @IvoB
At least some of the things you mention are out of scope here, initially at least. I already have 5.1 Dali speakers I’d reuse.
I’m not that bothered about adding more speakers or requiring a processor that can do more than 5.1 or Dolby Atmos, it’s mainly going to get used for 2 channel playback and be part of a room/setup shared with family and where movies/TV are a requirement on occasion.
I did look at having a mix of a Uniti Nova and something like an Anthem AV amp but then got talking about the Linn Selekt and thought that was interesting as it did all I needed and in one box and could be evolved over time given its modular design. I also partly liked it as it supported the Linn Exakt active speakers but my dealer put me off those, partly on cost vs similar passives that were better value.
I’ll take a look at your options, ideally want one box that covers all the obvious usecases!

The Linn Selekt DSM was the first proper streamer I listened to about two years back. I specifically called in to my local Linn dealer for a listen, and I was very impressed with the overall 2-channel sound. Best I’d heard up to that point.

I’ve bought Naim gear since then, but if you end up wanting excellent 2-channel streaming in your HT room at times, it will sound great.

it’s mainly going to get used for 2 channel playback and be part of a room/setup shared with family and where movies/TV are a requirement on occasion.

I use my HT system for stereo and multichannel. When playing (CD, SACD) or streaming/rendering music it’s stereo only. For movies is 5+1. This works fine for me.

Had a sit and listen to the DSM today, also checked it out alongside a similar system to mine and had a play about with an XPS and a Melco N100 just for fun, Focal Kanta 2’s on speaker duty.
Asked them to put it to one side for me as I can add the surround modules to this later, it’s basically brand new, they had to cut the tape on the box to demo it to me.
Also had a long and interesting discussion around Exakt speakers as well, insightful! 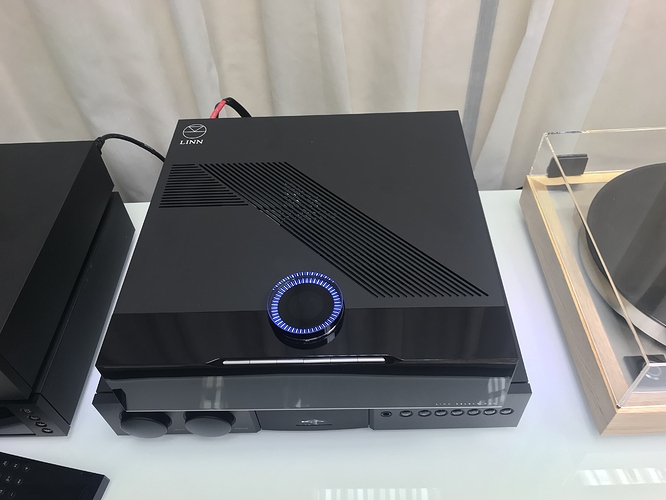 I got my n-Vi working again, almost 12 years down the road. With an Naim Access (Center), Kudos Super 10, n-Sub & some small rears & some cable’s (Chord) to match, I do think it’s s a hard preposition to beat.

I did ponder a Naim vintage AV setup but apart from the potential sonic improvements it wasn’t going to solve any of the main issues/limitations with the current setup and would be a step back in many respects.
I’m working out the numbers of the Linn kit at the mo, I had a listen, sounds decent enough and is as configurable as any one box option I’ve seen!
Glad to hear you got it all up and running again though, keep it going whilst it still works!