Postie brought the (signed!) LP of this today. Will give it a spin later but in the meantime I thought I’ll use the download card that came with it so I can get it on the NAS. Unfortunately the download code doesn’t work. Anybody else got the LP with the download code and if so did it work or is it a case of the downloads not being available just yet?

Due to arrive today, will let you know

It’s not a nice sounding album on Qobuz unfortunately despite being 44/24, hopefully your vinyl will be better.

I remember their first album (If You Wait) was released on quality 45rpm vinyl and it sounds sublime. They seemed to recognise the advantages of investment in a quality recording etc. Then the next album (33.3rpm) wasn’t quite as good to my ears so I’ll be interested to hear what the feedback is on the latest press.

Like all these things as they got more commercially successful the quality of the vinyl decreased as I suspect quantity rather than quality was the priority for the record company.

my copy has just arrived so will lisen over the weekend

agree with @DaveEngland have If you wait on 45 - stunning

Available on Amazon music if you are subscribed. Listened to it yesterday in hi res.

Not really grabbing me after first couple of spins. Tricky third album, etc.

Sounds good on Qobuz hires. Better than their second. The first was epic.

They had me going with the “vinyl clicks” on track 1 from the CD. LOL

As always London Grammar musicality is good, better than good in some places & Hannah Reid’s voice is just unique.
But is this as a new album all a bit ‘samey’, if it was their first or even second album, it would be something, but I feel it’s so similar to the others, its no longer that unique, I don’t want to use the bland word, but …
Overall I’m not that impressed & the 2 spin didn’t change my first impression, I probably won’t be buying this one.

Seems to be the verdict from most I know that have listened to it. Not been impressed with the tracks I have heard so far that have been released.

I’ve got the CD arriving today and have just listened to the album on Qobuz. Really liked it and to my old ears, sounded very nice.
Then again I could happily listen all day to Hannah sing the telephone directory and enjoy it. Same with Natalie Merchant and Rumer.
I like the album.

Must just have been a timing issue, the download code is now working but with it being 320kbps mp3 fine for the car I suppose but not much else.
Why is mp3 even a thing these days, bandwidth and storage are not the problems now they were 20 years ago.

I’ve been painting and decorating my house over the past few weeks, with my radio on to keep the boredom and inertia settling. Radio 2 have been hammering the new singles.
Nothing worth whistling along with.
Perhaps the tunes need a big system to show worth.

Overall I’m not that impressed & the 2 spin didn’t change my first impression, I probably won’t be buying this one.

Go’damit, talk about an itch to scratch.
It bothered me that I have the first two albums & it would not sit right to not get this one.
So … FLAC 16/44 has arrived
I must say it does sound better than the web-stream I listened to this morning, but I still have reservations about the content. I hope it growz on me.

Got to say I am really liking the new album, her voice could charm the birds from the trees and the vinyl copy is superb quality as with their other two albums 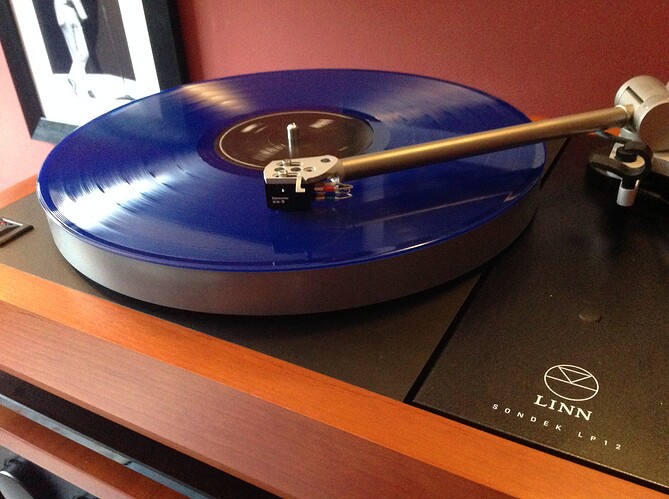 Currently playing the 24 bit/44.1KHz high resolution version on Qobuz. My immediate impression is that it has more melodic interest than the second album. It seems a bit weird adding vinyl noises to the opening track and track nine, ‘All My Love’, but I don’t find these detract from the overall feel as clicks and pops on a record would. I suspect it’s quite compressed as it has that ‘In your face’ effect.

It’s not a nice sounding album on Qobuz unfortunately despite being 44/24, hopefully your vinyl will be better.

Oddly I’d had the album in my Qobuz basker for ages.

I started playing it streaming in Roon earlier (pre-purchase) and thought it sounded very good, but that would have been 16/44.1 stream due to my legacy plan.

I then decided to buy the 24/44.1 version and felt it sounded distinctly worse for some odd reason.

I have been looking forward to this album for some time, but a few pre-release trcaks have not really inspired.

The 3rd track Missing is very good, and Hannah uses a higher vocal range which is very pleasant though the backing vocals don’t sound quite right to me, it’d be better without them.

Only managed about 5 tracks before I had a tennis session, so looking forward to the rest of it later once whatever nonsense is being viewed on Netflix has ended.