I have a pair of ‘mi-fi’ devices from EE. One is used at another property to allow a degree of monitoring of the house, the other is used sporadically, mostly when we are away at rural holiday rental cottages where cellular data options are often far quicker than basic broadband at the property which is fine for email etc but not video streaming.

These are both with EE and work extremely well, but the plans are a few years old and I suspect not the best value. I’m paying almost £76/month for 2 plans which are 32GB and 50GB and the last couple of times I’ve gone to an EE shop they’ve not been able to access existing account details due to ‘glitches’ which is poor. I just think they want to sell you a new contract to get commission.

I’ve had mobile SIMs from O2 and 3 for some time. 3 were PAYG which was great for the kids a few years ago but they’ve pushed the tariffs up so a £10 top-up lasts only a few days not a few months. Have also found thet both O2 and 3 are very poor for mobile data locally despite previously being cheaper.

Probably going to port my numbers away from both but having never done so I’ve been reluctant but the costs are now silly. ASDA mobile is the likely move, initially with a test SIM.

Anyhow the other day browsing on Amazon I came across 2 EE SIMS which seemed good deals, specifically designed for data (tablets or mi-fi type portable routers).

One offers unlimited data usage pre-paid up until March 2024 for around £234 (one-off pre-payment), around £10/pcm for unlimited data which sounds great for holidays.

Both seem to be comparative bargains compared to my >£70pcm EE data tariffs.

Anyone ever tried such SIMs or have recommendations from other providers? Naturally coverage is key, but easily checked.

Hope these pics are OK: 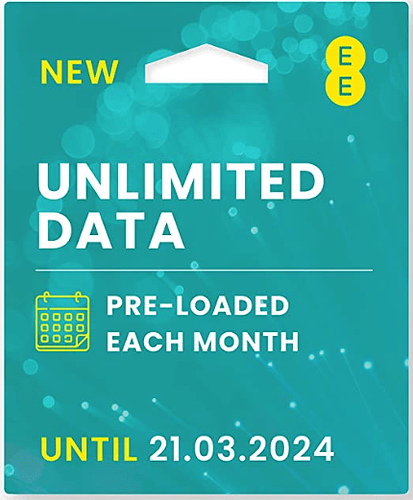 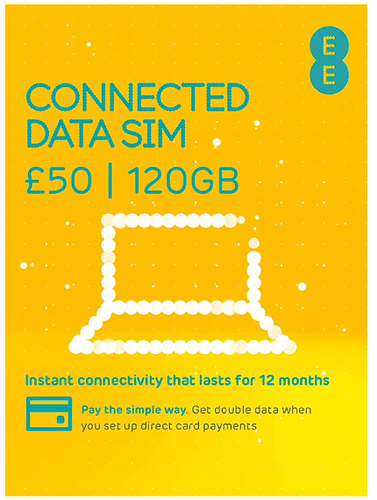 I get by with 2gb per month and a refund on unused data which usually gives me £1+ back. So I sometimes pay 50p for the data I’ve used that month.

I think prices may be coming down for some of this stuff.

I’ve just moved both my kids to sim-only with unlimited everything (data, calls and texts) for about £25 pm.

It may be worth also looking at getting some form of family contract. I have one with O2 and get 20% off each one.

How much do you need?

Good question! I need to figure out how much the box at the other property uses to keep the video feeds accessible - the plan for that is probably 32GB/month and tghe last time I checked cheaper EE pay monthly plans were only marginally cheaper for much less data as an existing customer.

Heavy mi-fi usage is sporadic mainly when we’re away. So, the other box which maybe has a 50GB/month plan could use almost all of that if we’re away as we do a lot of steraming video in the evenings or on wet days - yes, a bit sad really as it would be nice to be away from all the tech stuff when having a break but in reality you still need internet access for many things these days.

This sporadic usage a few weeks/year was why I was wondering about along term SIM plan which would certainly be cheaper than what I pay now and without a contract.

Not heard of Smarty before, but I’ve had 3 on PAYG for some time on the family phones, and I generally use a £10/month top-up with unlimited calls/texts and 4GB data - rarely use this much on the phone generally because anything data intensive is done on wi-fi at home (eg downloading Qobuz audio files).

Yes, that makes sense with phones, and something I was going to do ages ago, though one provider doesn’t always cover all bases eg one has good coverage indoors at my workplace, but poor at Mrs AC’s.

I have a plan with O2 for one phone but am thinking of moving this as coverage is appalling at home indoors and calls often drop, unless it’s my phone perhaps.

When I go to town I regularly find both O2 and 3 cellular data is so slow it’s almost unusable, taking ages to access a simple website (even outdoors) when it might be pretty good in other locations. No idea if this isdue to the networks being ‘saturated’ with too many users, throttling or larger buildings in building-up areas.

I thought coverage was generally good for most companies now. But haven’t really checked. I know O2 have a coverage map which may indicate if it’s just your phone.

Can you enable WiFi calling on your phone? That can help with calls at home at least.

That’s £6 a month with smarty, if you can be bothered to switch. Really depends on the coverage in your area. I use a family plan where our 3 accounts are linked which gives everyone 10% reduction. So combined I think it’s somewhere around £18 for 3 phones for the month. Wife gets 8gb, daughter 8gb and mine is 2gb with cash back on unused data.

Interesting, I was going to try Asda’s mobile service which I think is Vodafone under the hood and recently picked up a few SIMs but haven’t ported numbers yet, but the Smarty option is interesting if they are 3 but cheaper!

Also worth considering Talkmobile (who are owned by Vodafone and not to be confused with TalkTalk) who offer 6GB of data for £5.95/mth or 12GB for £6.95/mth when bought through the uswitch comparison site.

They use the Vodafone network and their contract length is only 30 days so you can always switch after a month if you aren’t satisfied rather than being stuck in a contract for 12 months. They also support 5G, WiFi calling, VoLTE and still have European roaming included for free.

We have found Tesco to be very good value. They use the O2 network.