Here’s an outline about what this category is all about.
http://dr.loudness-war.info/

I have recently been in discussion with another member of the community(@Steve_S) about the poor dynamic range of many remasters after he kindly responded to my post on the first Black Sabbath album. The CD arrived today and confirmed what I suspected(see attached images to see what I mean). Thought other members might like to see this because I am frankly shocked at the quality of many modern pop/rock CD’s. Fortunately, jazz and classical seem less badly affected, but if you want quality recordings you may need to go vinyl. No wonder it has come back into use the way it has!
Having recently upgraded my setup to a Uniti Nova after many years, it seems a waste to have to listen to junk remasters tailored to mobile phone speakers, so I thought doing a bit of research and sharing.
Apologies to grannies that already suck eggs! 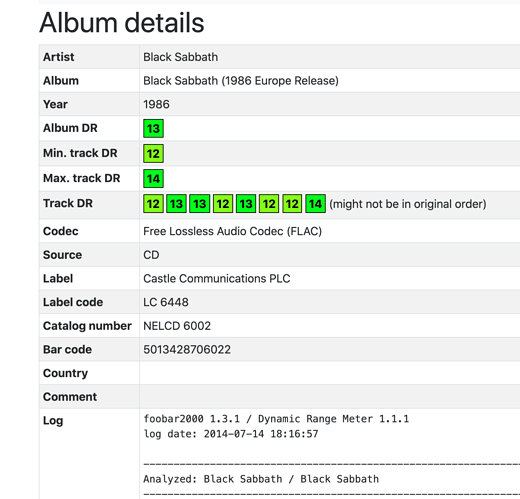 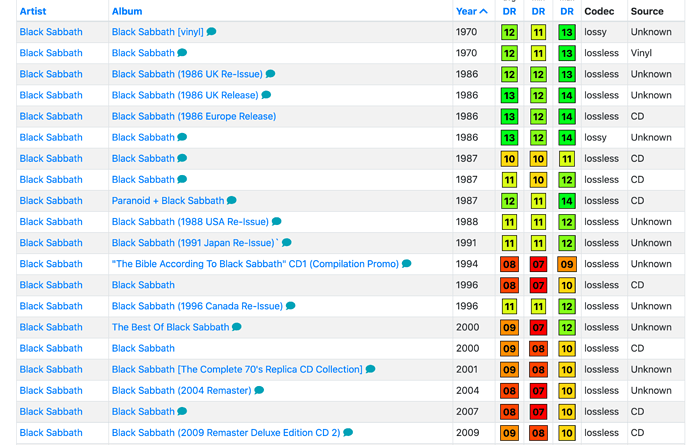 The problem is that your images only highlight one parameter of various releases, formats and re-masterings - DR.

The reduced dynamic range is to be regretted of course but other aspects of the re-mastering process might be beneficial. Overall the way to evaluate the differing recordings is to listen.

I tend to agree with you Svetty. I’ve listened to some re-masters that have a low DR rating expecting to be disappointed but I was surprised that they didn’t sound too bad. Loudness is part of the equation but not all of the equation.

Being a big Sabbath fan the only way to listen to them is original vinyl presses. Digital try and find the first CD releases. The 2009 remasters are rubbish. I’m trying the 24/96 Hi Rez versions at the moment. They are from the masters they used for the Vinyl box set a few years ago.

You are quite right about the listening bit, but if you don’t have the opportunity, especially with some of the older pressings, then it may give you an advantage.

I love dynamic range, my wife hates it.

Back to the original topic

I’m a huge Sabbath fan, can’t count how many times I’ve seen them including their last ever concert in Brum, saw them 3 times in that week alone

The only way to listen to them indoors is original vinyl, especially the early stuff
The first 4 albums were all Swirl vertigo but very quickly re-released on spaceship vertigo
And very quickly after that NEMS which really killed the quality and Castle came along the 80’s just to prove NEMS hadn’t killed everything

Don’t know much about digital and even less on streaming
I presume when streaming you can see the record label etc and decide which version you want
Or alternatively an idea,
In the vinyl world we’ve often looked to Japan for superior pressings, don’t know if the same applies to streaming

In the meantime I’ll make do with my Swirl Vertigos