IIRC when I picked up a refurbished LP12 from Cymbiosis Peter said he could find a base board for me. Somewhere from the recesses of his workshop he found an old baseboard and fitted it. I wish I had asked him if it was necessary.

SRM has offered 14-day buy-or-return, so it is being delivered to a Naim dealer in Kingston called Simon. I will take over my LP12 and we will compare hardboard base, no base, Tramp 2 and SRM base. We will also try with and without the SRM platform that partners the base.

Simon’s shop has a wall shelf very similar to mine.

As yet, no other company has offered the same as SRM.

I’ll report back with results when I have them.

That’s good to hear. SRM were great when I lost one of my Silentbase spike covers* (god knows how

I’ll be very interested to read your impressions of the SB vs no baseboard, and SB with/without SRM platform (never tried that).

Next Thursday is demo day for no-base, Tramp 2 and SRM (with and without platform).

Infidelity’s LP12 specialist is already being helpful. We discussed the Tangerine Audio option. His advice was that it works brilliantly, but is overkill (and now extremely expensive) unless attached to the Stiletto metal plinth. It is a pity that we could not include Stack in the test, but TBH I think we’ll have quite enough comparing to do as it is.

Carl also pointed out that my LP12 is so old that, even with its corners having been braced in the past, the SRM base and the Tramp2 may simply no longer fit properly. In that case, I either need a new plinth or to stop messing about and just run the bottom of my LP12 naked forever. And I like my plinth…

News on results to follow when I have it.

My SRM fitted perfectly on my old 1982/3 fluted plinth. I don’t remember if it was ever braced.

I have an LP12 of similar vintage to yours, fitted with a Trampolin 2, so have no concerns on that score. I had a lot changed on my deck and system over a short period, so can’t tell if the Trampolin 2 made/makes a difference.

My elderly (1986) Linn plinth was fitted with a Tramp 2 by Cymbiosis some time ago.
If your ‘fettler’ is up to the job, the Trampolin can be ‘adjusted’ to fit.

First, my plinth is too old (very old ones were fractionally smaller) and too warped to take any of the bases! We could probably work on plinth and Tramp to make that fit, but Carl at the shop was not convinced it was a great idea.

Second, removing the saggy baseboard improves looks. If it changes the sound (which I am not convinced I can detect) it certainly doesn’t make it worse. On the wall shelf, we did not prefer Tramp to naked.

On multiple LP12 of different ages and specs, the SRM Silent Base platform clearly improved SQ (e.g. Diamonds on the Soles of Her Shoes, Hejira &c.). Using that platform at home, it is clear that I now have too much suspension. Out goes granite and HRS rubbery feet (to under electronics, where they really belong).

Best so far may well be resting the SRM platform on laminated glass, but I am struggling to convince myself that I can hear any difference between glass and the MDF sheet supplied with the Targett shelf all those years ago. Either is sounding at least a good as granite (and I am happy to get that weight off the rack).

Carl in the shop had been trying the SRM platform. Like me, he has heard several worse, but none obviously better, and also felt it helped their Quadraspire shelf (the one with brass bits) with an LP12. A comparable LP12 on top of a Fraim does not sound as good IMHO.

Given the state of my plinth (which is not audible at all), I probably will swap it for a less old one that lets me try the SRM base as well, but I would not be surprised if I end up using their platform with a new plinth - still naked.

Sounds like a good morning.
Got me wondering about my Linn/SilentBase + Quadraspire (brass bits) and add the SRM platform. I’m impressed they had any SRM in your dealers - I’ve never seen them in stores. Bought my SB direct from Stuart.

Lp12s and most Sub chassis come with a little cap that fits over the bearing so you can turn them upside down.

I bought a plastic cap for the bearing from Russ Andrews for a few quid, when I changed the Valhalla for a Lingo 1.

I also fitted a Trampolinn 2, which in my particular circumstances made a noticeable difference. Of course that’s IMNSHO and YMMV.

SRM was at the dealers because I asked for it to be sent there! As I say, I won’t turn over my own LP12…

Silly me. I’d forgotten that bit…

Has Carl also been trying the SilentBase?
I may contact Stuart and ask about the combination of the two (Base + Platform).

Carl got to try the SRM kit only because I asked for it to go there, but it thought it good for sound and value versus others. They had a full Stiletto LP12 there, so the TP/ Tangerine approach is presumably the one that works for them. Not surprising given RRPs on that stuff.

He has also been impressed with Stack sub-chassis for sound and vfm, but has not heard other Stack stuff.

I wanted to try the SRM baseboard, given how well their isolation platform seems to work. That meant a new plinth (see above). Carl at Infidelity had a nice cherry plinth to hand, so he fitted all my internals to that plinth and added the SRM baseboard.

The LP12 plus new base can of course sit directly on the MDF of the Target stand - it sounds to me pretty much like it did with no baseboard at all except in the bass, which is materially cleaner/ tighter. My granite and HRS feet combination still improves the overall sound versus the straight Target stand, I think, but it is a pretty small extra improvement in (a) tighter bass, (b) stereo separation and (c) sibilance by itself.

The base and platform unsurprisingly work well together - the effect is more obvious improvements to exactly those things that the base or platform improve modestly when used in isolation, and I really can’t say which has the bigger effect.

As with previous experiments with the SRM platform, the full combo definitely no longer needs anything complicated underneath it - the full LP12+SRM+SRM combo on the Target stand is noticeably better in some areas than any of the other options tried, isn’t worse at anything, and means the LP12 support is a lot lighter (no benefit from granite) and a bit less daft-looking than before.

Result - the whole lot is staying long-term, except the cherry plinth - it is nice but in that corner of my room a black one fits better. I can be patient, given how good it sounds now.

Finally, a big cheer from me to Infidelity, who have been absolutely brilliant in helping me with a product that they do not sell, and sorting out multiple minor oddities on my LP12. 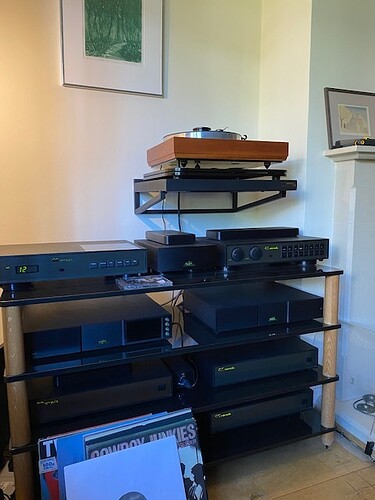 Lovely wall bracket. Nice and discrete and hugely effective I’m sure. The TP Vulcan I use not only meant I no longer had to tiptoe around the room but hugely improved the sound of the TT. I also benefited from a helpful dealer who found me a suitable shelf.

I do know it’s heresy!

I have heard clamps/ pucks work well - on Michell and SME - and really badly on LP12s. I got this in a pack of test isolation stuff from HRS. 2 of 3 listeners (including me) were confident it would do what they always do and kill the music. It didn’t.

Perhaps that’s because it isn’t that heavy and isn’t a clamp - it’s a rubbery anti-vibration device masquerading as a clamp really.

For almost all of us (including me), vibration/ isolation issues are a long way down the list of things to fiddle with. As with cables, most actual improvements are small and the scope for self-deception is large. However…

Does this thing kill the vibrancy and space? No.
Does it tighten bass on (say) the Bach organToccata, Hejira and Cosmic Hippos? Yes.
Does it help top end as well? Yes, though less.

These effects are small and only audible (with repeatability and with someone standing in front of the TT) at volume levels associated with Zeppelin, not Brahms. However, even the most cynical 2 listeners (both musicians, one professional) agreed that it improved the sound at the margin when you do insist on the ‘this one goes up to 11’ approach.

If all our ears say Yes for long enough, so do I.

Thanks @NickofWimbledon for the review of the SRM base and platform. Interesting - I think I’ll add the latter to my shopping list. I’ve had the SilentBase a good few years now, so I’m intrigued to see what the platform effect is with it.

My summary (not my forte) would me ‘a bit more of the same’, but I’ll be interested to see if that’s what you hear.