I’m guessing this issue may have been addressed before, but I’m wondering if it’s normal that the speed that my Radikal Klimax equipped LP12 runs at should be so sensitive to me using a dealer supplied, ‘Super Exstatic’ Carbon Fibre and Velvet record cleaning brush that it virtually comes to a standstill even when I’m not applying much pressure? I can ask the dealer this of course, but Audiophilia Nervosa is getting the better of me…

The DC maxton motor has very little torque at all

Thanks JS. I thought that was probably the case. Which begs a second question: is there a brush that has a lighter touch than the exstatic, but does as good a job?
Mine has 2 thin carbon fibre brushes either side of a 1 inch wide velvet pad. 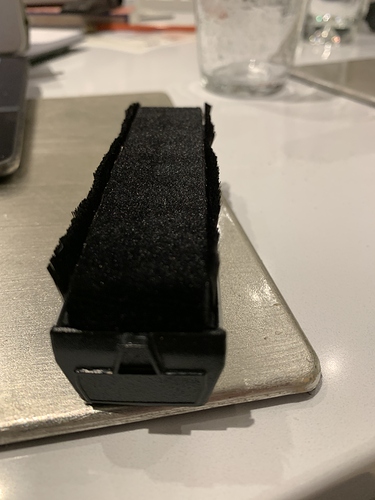 Carbon fibre brushes microscopically scratch the record. By how much depends on how hard you press and how many times, but they do scratch.

Are you just pressing too hard?

Presumably when pressing lightly, once you lift the brush off the speed comes back to normal within a few revolutions.

Just my 2p worth

That’s what I do. Although I do use a large soft make-up brush to flick off any obvious debris that could scratch the vinyl when put back in it’s cover. Sometimes I’ll use cans of compressed air too.

I only wet clean now using an RCM. Records remain static and dust free. No need for these things any more imho.

Everyone in Sweden who bought an LP12,.was advised by its retailer to do so.
I’m surprised to read,.that these “brushes” are still used.
This should the retailer inform its customers about.

Thanks all. I buy a lot of used records and don’t always get time to run them through the RCM (I have a Pro-jekt) before playing, hence the need for a brush. However, point taken. Interestingly, the brush was recommended and sold to me by Peter at Cymbiosis, so I’d assumed it was safe to use.

Everyone in Sweden who bought an LP12,.was advised by its retailer to do so.
I’m surprised to read,.that these “brushes” are still used.
This should the retailer inform its customers about.

I ruined a few records in my early days using one of those brushes by pushing the dust down into the grooves.

After using Linn’s advice, the worst of dust that was on the records from purchase took maybe 2 lots of blowing the dust off the needle from each side, then never needed doing again.

I’ll probably invest in a record cleaner at some as I’ve read that even new vinyl benefits from a wash before first play to remove some of the chemicals.

The real initial advantage of cleaning a new record is the banishing of static imo. It also makes me dig out a clean anti static liner before its first play. I still own one of these brushes RackKit, it’s just never used.

These types of brush were heavily promoted many years ago and, if used correctly, I find them OK - but using an RCM is far better.

Although, even with anti-static sleeves, I still find my records can be dust magnets.

The trick to the Hunt/Goldring brushes is just to use the weight of the brush. Don’t press down, support the brush from behind as the record turns under it. If there’s a bit of crud stuck to the record these brushes are not the answer, use a wet cleaner.

I clean my records using an Audio Desk Vinyl Cleaner Pro ultrasonic cleaner and then store them in a new anti-static sleeve. I very rarely need to use a record brush, and the motor torque is a non-issue for me since I have a Clearaudio Ovation.

I had a couple of old Hunt brushes from the 80’s which I don’t recall producing visible scratches - purchased a ‘similar’ Audio Technica brush last year and it scratches vinyl quite visibly to the extent it’s never used now. I have to wonder if modern designs aren’t as good as I suspect my eyesight was better years ago and used to scrutinise the surfaces more.

The trick to the Hunt/Goldring brushes is just to use the weight of the brush. Don’t press down, support the brush from behind as the record turns under it…

That’s what I recall doing years ago, though more recently I must be a bit more clumsy as I sensed the brush was going to flip over and scratch the record.

Says who? I’ve never heard that before. Not that I think they are very useful, I am very much skeptical that a carbon brush can damage a record, and am interested in the source that shows otherwise.