Macbook sleeps when placed on Muso

Posted in case this is useful to others. I have Macbook Pro (mid-2012) for use with my Muso gen 1. The Macbook would not wake up from sleep, so I did a lot of diagnosis with a Mac repair specialist. It turns out that when the Macbook is placed on the Muso it tends to go into sleep mode, and if if is in sleep mode it will not wake up. Raise the Macbook 6+ inches above the Muso, and it works normally.

The Muso must be putting out some pretty nasty EMF, to stop a premium laptop working.

That’s interesting. The Mu-So floats the earth and has an alloy skin, so I guess it may have something to do with that. Also remember you have some big amplification and some hefty drive unit magnets very close by, as well as some high power SMPS. Did you try reversing the figure eight mains lead?

I believe this will be related to the large magnets on the Mu-so woofers. If placed in close proximity to the magnetic field, the MacBook will think that its lid has been closed. The same will occur on an iPad.

Hope this helps,
Will

This may explain why cats sleep on amps and loudspeakers as well.

We should submit an article for the Nature magazine.

FWIW my Thinkpad P50 is not affected by being placed on the Muso in a brief experiment. Thinkpads are of course very robust machines (this heavy model has hit the concrete a few times without needing repair–you cannot do that with a Macbook!).

I reversed the two-pin mains plub in the socket (being on the Continent). No change.

Sometimes it is possible switch Macbook sound and screen repeatedly on and off by bringing it closer to the top of the Muso then lifting it away. 6-12 inches is the point where it flips. The problem has not appeared when Macbook is in front of or below Muso. The problem appears when it is above the Muso.

It is all about the position of the MacBooks lid magnet sensor in relation to the Mu-so speaker drivers.

To clarify, the MacBook is not being adversely affected by the Mu-so at all, it is just mistaking the magnetic field for that of its own lid and putting itself to sleep.

A perhaps useful tip - connecting the charger to the MacBook will prevent it from entering sleep mode when the lid is shut. So the screen will still turn off when placed in the specific position on top of the Mu-so, but should continue playing.

It doesn’t seem wise to place a computer on a Muso. Don’t do it. Problem solved.

Putting one device on top of the other when they both use natural air circulation for cooling seems like a bad idea to me.

In my mind is a Muso is lifestyle product, albeit a superior quality one, and saying I should not place stuff on top of it is like telling me not to put anything on my fridge. If it were a stack of Krell monoblocks or something, I’d understand. Perceptions differ! Anyway the old Macbook works where it is now 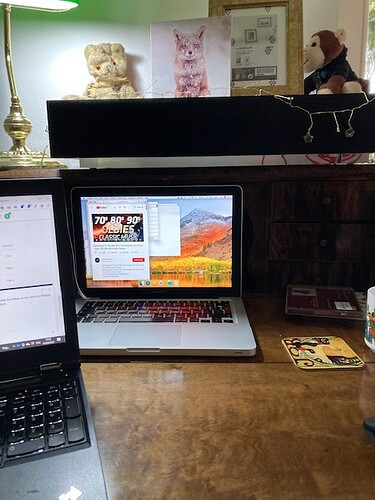 Yeah, but it’s a Naim lifestyle product. We like things to be complicated round here

Besides, all speakers have big magnets in them. You can’t just get rid of them for convenience or you’d just have silence!

saying I should not place stuff on top of it is like telling me not to put anything on my fridge. I

Not putting video or music tapes, devices with hard disks, credit cards, or anything that can be influenced by magnetic fields, onto other devices that contain strong magnets, has been established practice for about 50 years or more. When TVs and computer monitors where based on cathode rays, this included proximity of speakers as well.

The reason is physics, you can’t prevent good speakers having strong magnets

Complaints are better directed at a Apple, if anyone. “The MacBook is a lifestyle product, why do you use magnetic lid sensors that are easily influenced by the many other devices containing magnets?”

I was not complaining–just warning others. For all I know, all brands of wirelesses and soundbars are all also radiating levels of EMF which can stop consumer electronics working in their vicinity.

Yes, Macbooks are apallingly fragile in my experience. That’s why I use Thinkpads. Unfortunately Naim support Apple laptops rather well, and offer little for users of Windows or Linux.

It was a super interesting and useful report, but the last part that I quoted was a bit of a complaint

As for MacBooks, I had a 2009 one when one could still run Linux on them and was very happy with it for 9 problem-free years. My current Dell XPS has given me more trouble in 3 years. Maybe it’s time for a ThinkPad next time, now that they support Linux.

Agreed about the Naim stuff. Although they have nothing for macOS either, it’s just that macOS can run iOS apps and Windows can’t run Android apps. (And the Naim iOS app is better than the Android version).

With Linux support it’s always a gamble. The Roon remote application for Windows worked perfectly under Wine for years and suddenly stopped doing so. What can you do …

a Muso is lifestyle product, albeit a superior quality one, and saying I should not place stuff on top of it is like telling me not to put anything on my fridge

But it’s a lifestyle product with a great big volume control knob on top, which to me suggests it’s not really designed to have something placed directly on it. Pehaps your fridge has knobs on top; mine doesn’t.

No, there is no great big knob on my fridge. My fridge has a great big knob inside. Sounds like I have been using the fridge all wrong for decades too