This sort of feels like a confession but for years I’d been sending the juice to my beloved Naim kit down a cheap generic extension block (into stock Naim power leads). I didn’t sound obviously ‘bad’ but I thought some better mains gear might be a nice cost effective tweak to keep the upgrade itch at bay.

So, I ordered myself the following:

The mains cables came first so I banged one on the 200 first, improvement. Then I stuck the second one on my HiCap (feeding the 282), even more improvement.

Basically the noise floor had been radically reduced and I was hearing previously unknown details in tracks.

Finally I unplugged the lot and connected everything into the Wireworld Matrix 2 being fed from the wall by one of the ‘redundant’ Naim power cables. My XPS and NAPSC were now in the new power ecosystem albeit still with their original power cables.

All that from spending absolute peanuts, such a no brainer. Can’t believe I’d been handicapping my system all this time. The 250DR can wait I think!!

Let the cables settle in a bit then experiment with the plug order. There are several opinions as to which is best but with only 4 plugs you can find out for your self if it makes any difference.
Hopefully no one will pile in and load your expectations (but somehow I think they will).

Really? It does not in mine and it seems to be a common finding that analogue sources first and power amps last sounds best. 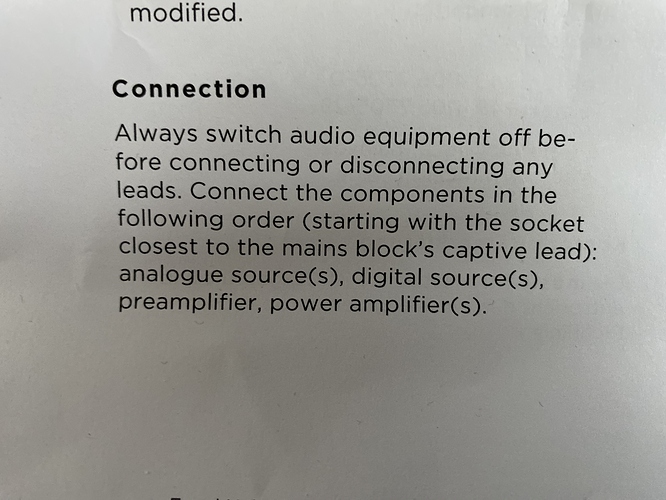 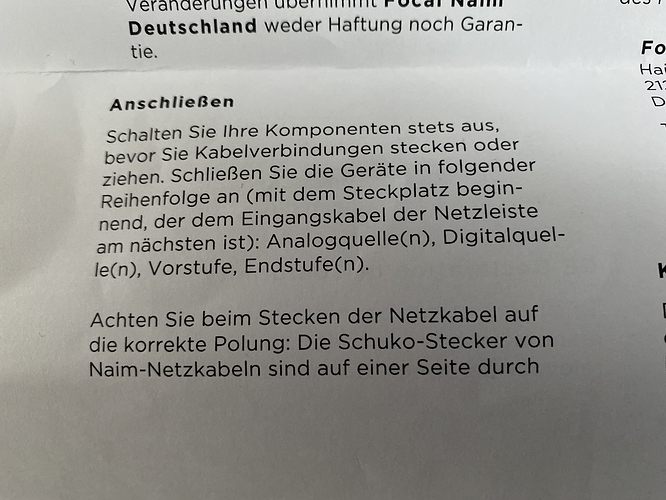 If you don’t have dedicated mains, and if can accommodate it, get that done. Your system will then be on a firm foundation.

The Wireworld Matrix 2 is a very cost efficient upgrade from cheap power strips. I have one in my system too and experienced the same improvements. Lower noise floor, details coming through and more space between instruments.

The Wireworld Matrix 2 is a very cost efficient upgrade from cheap power strips.

… a mate has one, & he too is chuffed with the change it made from a cheap strip.

But with the slight thread drift into the talk about best plug in positions with the Netzleiste Music Line(s) , these are different to Wireworld & is misleading for @jezoakley.
The Wireworld Matrix-2 is internally wired in radial to L, N & E with each of three radial branches going to two sockets. So in theory there should not be any advantage in plug position order, other than (maybe) swapping between pairs (1-2, 3-4 & 5-6)

Changes and improvements in SQ from quality power strips and powercables are usually quite impressive, more as the quality increases, and the price unfortunately; although some engineers still say out there that they are still snake oil…

Dedicated supply and Powerlines connected directly, then have a listen!

My bad, it was this text I found online, implying source and amp on first two. My Darkside-of-the-Moon naim approach certainly agrees.

Music-Line is now launching an instep solution,in the form of a specially selected powerstrip with Naim’s own power cord,welded on solid copper tracks to all sockets.
In addition,the first two sockets are Star-earthed,to provide the best possible conditions for Cd-player and amplifier.

In short,a very well constructed powerstrip that with few,but carefully selected and high quality components,provides a very good power connection for your music-system.

@jezoakley So what this proves is stock Naim Power cords are just inexpensive nothing burgers. A $50. Bottom of the line AQ cable, funny. Now try and borrow some mid priced cords, start at your Wireworld strip. Rule of thumb best cable first Also amps should be plugged into the outlets closest to the inlet. Most current there.

The electrons move incredibly short distances in an AC conductor! There are plenty of electrons in the conductor to drive very high currents.

I used to have a basic Netzleiste - I don’t think it is star-earthed (but haven’t looked inside).
I now have have a Wireworld Matrix 2 - it’s better, but, strictly speaking, it’s not fully star-earthed either (see @Mike-B’s post), and, according to another thread, it’s not particularly well-built inside.

In any case, the improvements are marginal at best - it’s probably the sum of incremental improvements that makes the difference.

I used to have a basic Netzleiste - I don’t think it is star-earthed (but haven’t looked inside).
I now have have a Wireworld Matrix 2 - it’s better, but, strictly speaking, it’s not fully star-earthed either (see @Mike-B’s post), and, according to another thread, it’s not particularly well-built inside.

The basic Netzleiste MusicLine is not “star” earthed, it has metallic strips connecting the E, L & N’s in so called daisy chain.
Incidentally star is not a correct term in power supplies, it’s called radial. It a misapplication of a term that applies only to the audio signal circuit.

The Wireworld Matrix-2 is exactly as I said in my post, it has radials for L, N & E each going to pairs of sockets. I’ve seen inside one, you can find photo’s on www.
… very similar to my own 6 way using MK unswitched double sockets 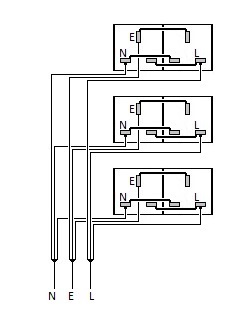 In theory in the audiophile world, YES, 1, 3 & 5 … etc
In theory, with my electrical engineers sensible hat on, it should not make any difference
Maybe best test it yourself & hear what you thnk is best

Interestingly, someone i knew told me, "A number of years ago that i had some very expensive AC cables to test out my his system, from one of the most well-known and highly regarded AC cable manufacturers. One of the cables, the very thick expensive one, seemed to obviously and absolutely change the sound of my system! It was just a no-brainer - smoother, more depth, more organic, bigger soundstage, more lush, finer detail etc. And it also seemed to make the sound obviously a bit “darker” and less bright. But, knowing that such a sonic change was controversial among engineers who know how these things work, and knowing the propensity for sighted bias, I had a friend help me do a blind shoot out between this Super Duper AC cable and a stock power cable.

Well, as soon as I didn’t know which cable was being used, all those “so obvious anyone could hear it” differences vanished! There was no darkening of the sound, no added lushness, no extra smoothness, no change in soundstage…absolutely no sonic characteristic by which I could reliably distinguish the stock AC cable from the expensive one!" So expectation does seem come to mind here. 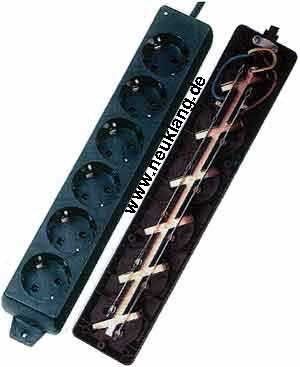 So expectation does seem come to mind here.

To avoid the expectations bias, whenever I introduce some change in one of the systems is my beloved wife, totally oblivious to the HI FI and electronics world, who serves as a blind tester, cause I do not usually tell her that I have introduced any change, and I just ask her if she likes the sound and if she finds it better or worse than the previous one, and ask her to describe to me her perceptions on it. Successive cable changes, especially speaker cables, but also strips and powercords, were immediately noticed by her, for the better… In speaker cables, the differences always were very large. At least it’s not just me!

There is no “star” (correctly called radial) according to that picture, it clearly shows three continuous buss bar strips connecting the L, N & E from socket 1 thru 6