Mains leads and their fuse ratings

I’m probably going potty, but have a distant memory either of an article in a magazinr or being told that NAP power leads should have 10A fuses.

Over decades of lead spaghetti I seem to have mixed up so many IEC terminated leads I no longer know what came with what across a range of electronic equipment.

Of 2 definite Naim leads with the Naim paper still attached which are not Powerline or Powerline Lite leads, both have 13A fuses. I think these were for my NAP 250s, but I really don’t know - could have been for HICAPs or a CD3.5.

Hindsight is wonderful but not only for IEC terminated leads but the dozens of ‘wallwart’ power adapters I have scattered around I wish I’d labelled them somehow when purchased. I did go through a phase of writing on adapters what they were for using CD markers but didn’t do so for long enough! At least the devices/adapters have ratings to cross-reference normally.

I thought once you mentioned fuses you immediately got sent to the naughty corner.

Is there a guide anywhere advising which mains plug fuses are in use with various Naim equipment or has every product always been supplied with 13A fuses in which case it’s easy?

Would a Naim tuner, CD player or DAC have required a mains lead with a 13A fuse for example?

Assuming all Powerline/Powerline Lite mains lead only come with a 13A fuse rating and we can retrofit these to older equipment maybe the answer lies therein?

The fuse is there to protect the lead, not the device it connects, and should be specified for that purpose. This is because UK ring mains typically have quite a large number of sockets, so require a higher rated breaker which is insufficient to provide adequate protection for each individual lead. A Naim box has its own fuse next to the IEC socket.

Thanks, that makes a lit of sense.

Where on earth I got the idea that some mains leads had 10A fuses is beyond me, but it was many years ago.

So in essence for Naim kit at least, due to the onboard fuses 13A mains leads should be fine?

However, ISTR, the IEC plug is only rated to 10A.

"The IEC socket is rated at 10A, but most IEC leads supplied with equipment are fitted with 0.75mm cable, which is (nominally)rated at 6A. Hence, you would expect to see a 5A fuse, and this is what is normally fitted.

However, BS1362 only now recognises 2 values of plug top fuse, stating that a 3A fuse should be fitted to an appliance of less than 700W and a 13A fuse to an appliance bigger.

Consequently, it is not uncommon to find brand new IEC cables fitted with 13A fuses. "

This whole thing came up some time ago. It’s a bit of a can of worms. As has been said, the moulded IEC connectors on Naim power cords are rated at 10A, and the cable is 0.75mmsq which is rated at 6A. (not full fat Powerlines). On the face of it therefore the 13A fuse fitted will not provide adequate protection.

However I think the outcome was that there are regulations in place that state that provided the cable is below a certain length then it is permissible to fit a higher rated fuse than would otherwise be allowed.

I didn’t know that British Standards only recognises 3A and 13A! A bit daft, IMO.

I’ve certainly got leads which came with 5A fuses, maybe some with 10A too.

I remember some plug fuses blowing in the hifi rack years ago, I wonder if when (rarely) dusting boxes I may have unplugged mains leads to get boxes out and reconnected lower rated ones in error as I often had extension leads hidden under the bottom shelf of a tall rack in a dark corner of the room so it may have been tricky to work out which was which just from the IEC plug end.

Powerlines are 4mm/2 & depending on insulation & application that size cable is rated at 32 amps.

However I think the outcome was that there are regulations in place that state that provided the cable is below a certain length then it is permissible to fit a higher rated fuse than would otherwise be allowed.

Not that I’m aware of or can find in the regs.
There are extension cable length recommendations related to safety but not specific to BS1362

… As a general recommendation all extension leads (unless essential) should be restricted to 5m or less in length .
If the lead is too long – DO NOT COIL
… "

Your knowledge here is clearly greater than mine. What I do recall is the poster reproducing some part of some regulations that stated something along the lines of that for power cords having moulded connectors and that were less than 2m (or something - can’t remember) in length then a 13A fuse could be fitted despite the cable being 0.75mmsq. I have no idea now where these regs came from but I do recall the poster saying that he had done a lot of research to dig them up.

It was all a mystery to me as my thinking only took me as far as a 13A fuse would not protect a 0.75mmsq cable.

This is from the Naim Amplifier Manual confirming that 13Amp fuses should be used. 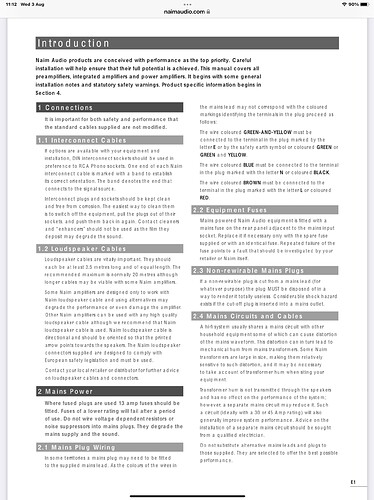 FYI, manufacturers will always state in the Manual what the fuse rating is.

Hi Pete, as I said I’m not aware of any reg related to BS1362 & cable length other than IEE CoP, maybe this thread will prompt someone to repost it out of interest.

As for a 13 amp fuse not protecting a 0.75mm cable, yes that is so in simple amperage numbers.
However the BS current rating is determined by heat in relation to current rise
(without venturing too far into the complexities of the BS standards) a 13 amp fuse is rated at 13 amps because at that current flow its body temperature rises by 1 degree C.
A 13 amp fuse will carry 20 amps almost indefinitely albeit its body will be warmer than ambient.
However in a real world short circuit situation, the fuse will blow almost instantly but the cable will not have a noticeable temperature rise.

In fact, a BS1362 13A fuse must be able to pass 20A indefinitely without melting:

The rated current is the current that it can pass without not overheating the plug. A 13A fuse will allow a current of 20A to pass without blowing.

The surprised the daylights out of me when I first came across it!

I suspect the 13A recommendation stems from an attempt to minimise the inevitable restriction in performance that the additional fuse in the plug will bring (and two if, like many of us, you use an extension). Using the highest possible fuse rating in the plug will mean any ‘strangling’ of the system will at least be less than it would be with a lower rated fuse.