I’d only just finished reading elsewhere, an article about corporate speak, and the very first item I looked at on the Beeb’s homepage, concerning the recent disruption of ferry services to the Scottish Western Isles, made me smile.

A spokesperson for CalMac, the ferry operator, wanted to reassure the public that

Well, yes, “You folks live on an island, and we provide the means of getting both people and goods there and back from the mainland” (Old fashioned speak).

The spread of this gobbledygook just makes me smile, and I can remember, back in the 80s, the word “proactive” beginning to appear in my then boss’s everyday vocabulary.

When I pulled him up on it, he just shrugged apologetically, and said that, when attending management conferences at Head Office, he felt excluded if he didn’t join in with the bullsh*t.

More amusing than anything else, I feel that it reveals more about the speaker, than enlightens us with its content.

I’m not sure that your CalMac ferry example holds water! Local (and regional) resilience plans are government (not management) plans with specific purposes related to safety and emergency planning. CalMac will be part of a LRP set up by the Scottish government.

We had a really smarmy wally of a director at work. I was working on lots of change projects at the time and one day he asked me to ‘kick the tyres on that’. I was rather surprised by his use of such a daft expression and thought he was joking, so my response was to ask whether he’d like me to gather some low hanging fruit while I was out there. He wasn’t amused and barely spoke to me again, which suited me just fine.

‘On Message’ - knowing that the Message was total b$ll%cks, but still believing in it - and urging others to do so. Starts to sound like its a religion… Ah… yes, in a way it is…

‘Details’ - those annoying things which haven’t yet been explained or even thought of, in the Latest Master Plan or the New Way of Doing Things.

‘Initiatives’ was another one. The one revealing point I do recall, was a senior person observing that if all the previous company Initiatives , over the last 10 years or more had really worked, then we should be world leading by now… He did not go further… But this has to mean either they had not worked or that had not been properly implemented. It was usually both… or they were just c$£p…

I think we should run this one up the flag pole.

‘On Message’ - knowing that the Message was total b$ll%cks, but still believing in it - and urging others to do so. Starts to sound like its a religion… Ah… yes, in a way it is…

Especially so when one of the reasons for being taken on was the spiel that we want people who think differently about problems and issues, so as to enrich our gene pool of talent.

And it’s then revealed you’ve actually joined a cult, where independent thinking is forbidden

In the early 90s I was playing a country session when I was asked to ‘re-image’ the part I’d just played. What did that mean? I didn’t want to ask and appear stupid, so I played the part exactly the same as before, but with a heavier pick and a bit more attack. Apparently it was just what was wanted.

Great thread Dave which I predict will eventually close in September 2027!

I heard the chief exec of a bank being interviewed in the 7.25am business slot on R4’s Today, one day last week. She repeatedly referred to the bank’s “proactive outreach”.

I emailed Today to ask why their journos aren’t calling out this sort of corporate bollox? Needless to say, no answer.

I bet you still don’t know what it means, and I certainly don’t!

When you hear this sort of stuff you can become immune to it. I quite often say ‘going forward’ despite it being one of those annoying jargon terms.

We had another director at work who was in charge of business change, who some of us took to calling the Director for Talking Bollocks.

Hmm, not sure that “calling out” is strictly kosher.

For many years I worked for a Government organisation with strong links to USAF. We used to compile a list of idiot phrases used by them in reports and instructions such as “failed to maintain adequate ground clearance” ie crashed.

When you hear this sort of stuff you can become immune to it.

If only I could.

great thread, thanks for reaching out

Hmm, not sure that “calling out” is strictly kosher.

I didn’t use the phrase in my Today email, I put it differently.

Good morning everyone,
I’m with you on this. It seems that the phenomenon is an attempt by the speaker to make the banal seem significant.
Another of my current bugbears is the use of nouns as verbs. Just this morning, I read a BBC article which referred to an organisation being “headquartered” in somewhere-or-other.
On another occasion, before the Bejing Olympics, I heard a radio interview in which an athlete said that he was hoping to “medal” in China. As this was a verbal exchange, it did occur to me that it would be a very bad idea indeed to “meddle” in China!
Brian D.

I work in IT and the industry is rife with jargon. Some of my all-time hated phrases include such gems as “where the rubber meets the road”, “moving the needle”, “circling back” and “boots on the ground”. Nothing can beat “giving 110%” though ,which is mathematically impossible but I guess it’s similar to “going above and beyond”. I’ve been putting up with this crap for over 30 years and retirement can’t come soon enough…

Reminds me of this image posted a while ago in the Best Jokes thread:-

Some great examples in this book.

Even though a lot of it’s way over the top, it’s relatable to what I’ve experienced. 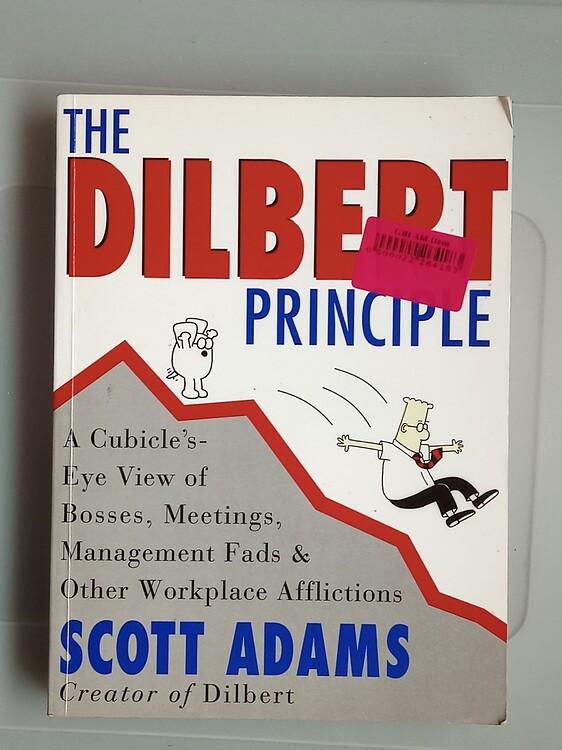 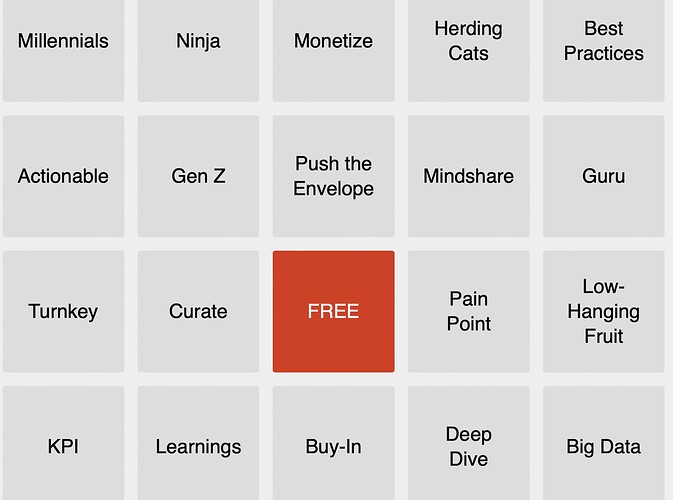 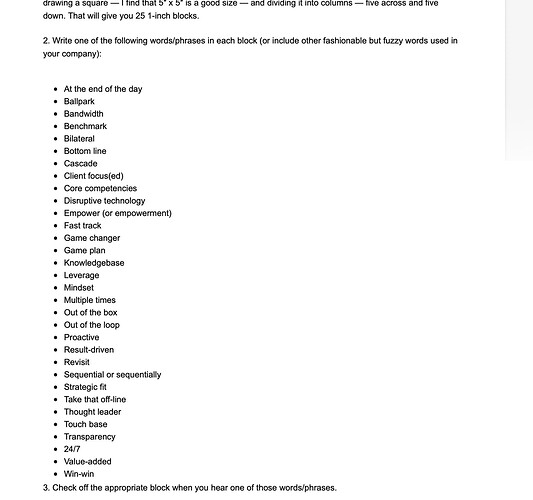