I discovered an issue with a particular album when using the Naim app. I have 2 album instances for the same album. The album has 9 tracks total however one of the tracks is by itself in one of the album instances with the remaining tracks in the other instance. When I investigated in file station I discovered I had two folders for the one album with the tracks assigned as the aforementioned. To remedy I moved the sole track in one folder to the other folder with the other 8 tracks to result in one folder with 9 tracks.

I then chose the “rescan folders detecting changes” in Asset. 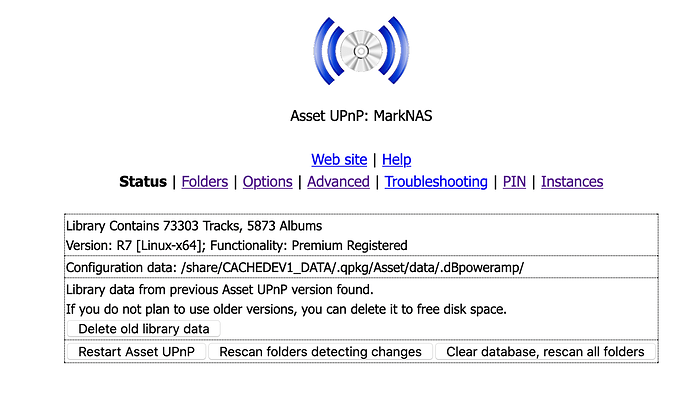 After a day or so the split album still appears in the Naim App. 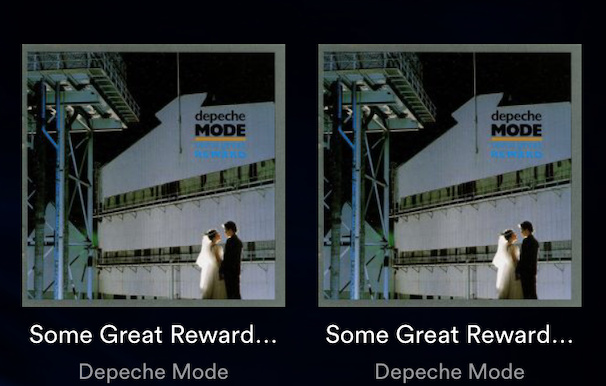 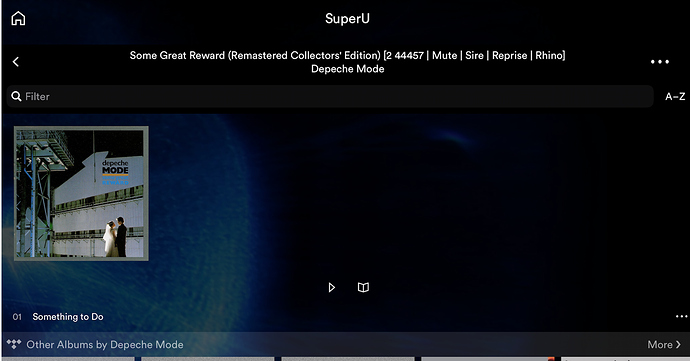 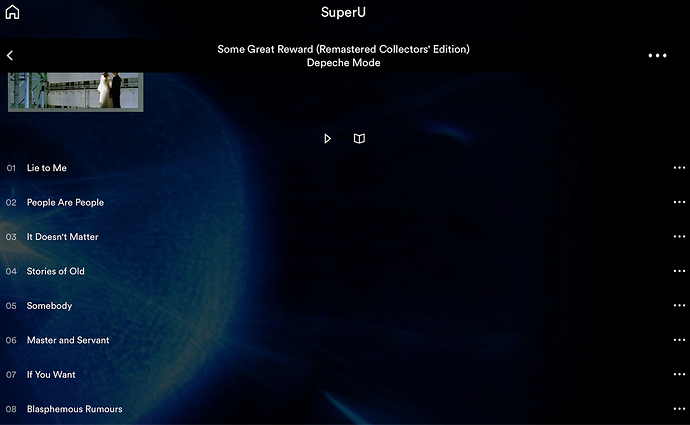 I use Bliss to manage meta data and it indicates the correct one album/9 track instance.

I’ll be honest, I don’t have a 100% understanding of file and meta data management. I don’t know how that album folder got split but I’m pretty sure it wasn’t spit when I loaded this library on my QNAP. But maybe it was.

Am I going about this correctly? Or is there a better way to manage files and meta data? I occasionally run across little snafus like this and fix them but it seems like it’s always a pain. Is it that Asset takes a long time to update? I’m not sure what amount of time to expect for my library.

I day or so ago I went ahead and selected the “clear database, rescan folders” option and hoping that does the trick.

Use the Folders and Filenames search in the Asset/Naim app and everything will appear exactly as you have it filed in the Qnap. Easy.

Have you checked the Tags it looks like a tagging Issue to me On the Album Name, Album Artist or Artist

In your example above the text that appears after the Album name why is it different?

The track ‘Something to do’ has a different album title to the others, so it will always show separately. Just edit the album title metadata (changing file names achieves nothing) to be the same as the others and then check that the tracks are numbered correctly.

As HH says, the Album title needs to be consistent (identical). Even spaces can sometimes cause ‘splitting’ issues like this.

Thanks for your replies. In file station I deleted the folder with the wrong album name and combined the single track into the folder with the other 8 tracks and correct file name. I think I’m at the mercy of asset updating the database with the new folder arrangement. It’s still updating it seems.

So for some reason, Asset, Minimserver, and even BubbleApp all still show the now deleted folder with single track in it. And the track plays from all three servers in spite of the folder getting deleted and track moved to another folder. I’ve rescanned and stopped and re-started all the server apps and it’s still showing.

I’m not sure what I’m doing wrong.

Why are you using file station.

I use qnap/asset and qnap/LMS. Albums are stored in random folders in multimedia, asset and LMS are able to find and play any album in multimedia without a problem.

File station just means more work for the NAS and another thing to go wrong.

I only use file station to keep my albums sorted. I don’t want parts of an album scattered across multiple folders b/c I didn’t rip them that way. I’m not sure how this one ended up in two folders. And I am using asset with the naim app. But I want my underlying file structure to remain organized. I tried restarting the QNAP and the old folder structure is still showing up in Asset. Frustrating. Edit - I think I’m going to uninstall asset and try starting over.

I don’t have parts of the albums scattered across folders, all the tracks in an album are in a single folder. The album folders are scattered.

The server will play any album or track from any folder in Multimedia, there is no need for a file structure as far as I concerned, once the file is in the NAS I can forget about it. I’ve no interest in where it is.

Hopefully your attempt to solve a small problem won’t result in a larger problem. It can happen, been there done that.

Hi. As described above you need to use a metadata editor to ensure the tags are the same - album name in this instance.

You can use bliss to do this. In the page you showed you copy the album name to all tracks and save. I don’t find bliss very easy to use this way. It is generally better suited to automatic scans of your library though I am finding if you set up the rules inexpertly it often messes with your organisation.

I use metadatics on my Mac to do this kind of maintenance when the flac gremlins corrupt my data.

The maker of asset UPnP has a tag editor too you can use.

Thanks for the response. I realize I should’ve edited the tag first I think. But it didn’t solve for the folder fragment I was trying to rectify. I don’t know how, perhaps when I copied my library to the QNAP something happened, but that one folder was on its own with only one track with the remaining 8 tracks in a separate folder all under the artist. I certainly didn’t copy it that way and my original library only has the one folder. Anyway, it was no problem to fix the folder in the QNAP library. I assumed the servers sitting on top of my library would get the message the folder structure changed but apparently that’s not how it works. It’s all a learning experience. lol

Sorry I missed the split folder thing. Once you have retagged the files and reorganised your folders all should be good. Did you happen to setup bliss to manage your file folders automatically based on tags? It can do that but I found it mangled my folder setup so abandoned it.

The folders are irrelevant, unless you are searching by folder view. It’s the Metadata that counts here. I’d suggest that as you are using Asset, you install dBPoweramp on your computer. As well as being an excellent metadata editor it’s a cd ripper par excellence. It’s made by Illustrate, who make Asset, so they go perfectly together.

It takes a while to get your head around metadata - I was hopeless at it when I started streaming - but get it mastered and it’s the key to a well organised music library and a stress free streaming experience.

Don’t forget that a deleted file or folder may still be sitting in a “recycle bin” on your QNAP, so be sure if you delete something, check the recycle bin(s) on the NAS.

Thanks HH, I’ll dl dBP and check it out. I realize folders are irrelevant and my folder structure is fairly solid but if I find fragments like the above I’m going to fix them so I need to understand why these changes aren’t getting into the server apps.

Thanks, that’s a good point and I did discover the deleted file in my recycle bin yesterday and deleted it. I don’t know how long it takes for the folder changes to show up. Asset seems to be still updating but I’m not certain. The FF browser tab Asset is open in continues to flash intermittently so I think it’s still doing something. It’s been doing this for days now. Not sure what that means.

As soon as you change the metadata it will reflect in Asset if you’ve chosen the relevant option in its settings. On occasion Asset can sort of get stuck, and telling it to do a full rescan will sort it out. The key thing is mastering the metadata.

Thanks, I do feel like Asset is sort of stuck here. I may uninstall and reinstall if I don’t make any headway by the weekend. I’ll check my Asset options again and see if there is a setting I don’t have enabled.

You can just close the Asset page and log back into it again later to see what it’s doing, and then to ask it to do a rescan.