Some pictures of the Marten in low light listening. Pardon the quality as the photos are taken by a phone. 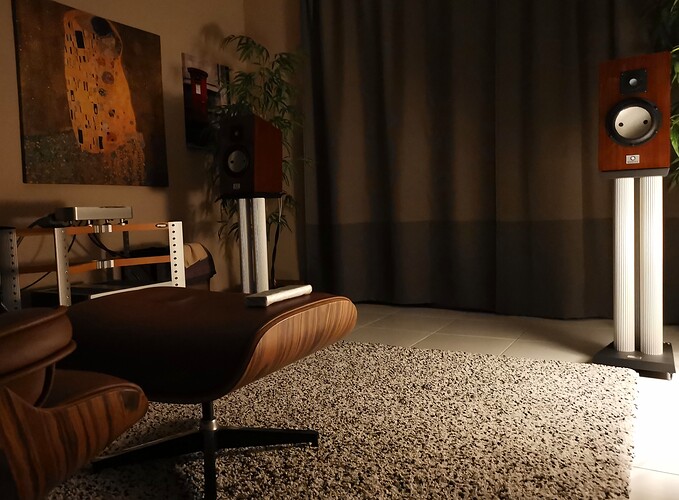 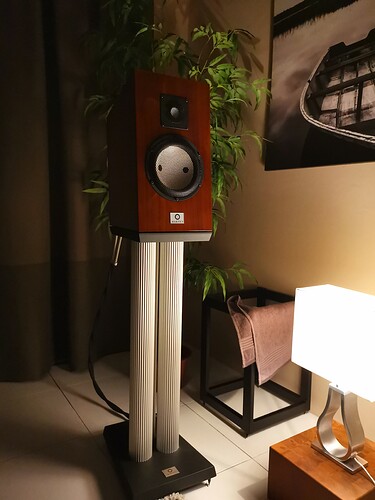 Hello
I managed to reach the dealer to listen to Marten Duke 2 with the following amplifiers:
McIntosh MA 12000
Luxman 590 AX II
What can I say … although McIntosh is much more expensive, to my ears, Lumxan sounded much better.
A sweet sound, with more than enough bass, airy and clear treble, and mids … magnificent.
I also went to another showroom where I listened to Naim Uniti Nova and NAD M 33. Although Naim has only 80W compared to 200W of NAD, Naim sounded better.
A full, clear sound and … it was heard louder!
But Luxman … was the best!
I didn’t pay attention to a single detail … I don’t know how hot Luxman is.
Can anyone tell me?
Thank you

That’s surely good to hear. I think I read about the big and expensive Mcintosh MA12000 sound underwhelming somewhere on another forum.

The Luxman L-590AXII surely runs hot (you can’t touch the top of the amp with your hands when it’s fully warmed up) but not hot enough to become a radiator to heat up the room.

Hi there, what, if anything are you using to connect your Duke’s to the stand?

Hi, I have some round isolation feet between the Dukes and stands. They are rubber or foam like material and are self adhesive(to the stands) . I haven’t really experimented with any other material or product.

As a side note, I contacted Marten to enquire on the isolation feet between the floor and stands since I was curious if the Isoacoustics Gaia would work well with the Marten. They mentioned they have the Marten isolators which they can highly recommend for any Marten speakers which include the Dukes after testing them against spikes in all rooms/conditions. They found the speakers to sound better with the isolators in most or all room conditions. They also mentioned that the Isoacoustics Gaia is the same as Marten isolators, and the only difference is in the way they look. I will likely try the Gaias when I have the itch. The Marten isolators are costly…

@Peder is a fan of Jorma and of good cables….

I have the Gaia’s on my stands, motivated by the release of the Marten version. I mentioned a few posts back that I would report on them, but totally forgot, so here goes:

I have the Gaia III’s and use them with the corresponding Isoacoustic carpet spikes and they fitted easily into the existing threads on the base of the stands. The Gaia’s come with a selection of spikes with various threads, so easy to match. Once all 8 were in place, I positioned the stands without the carpet discs, added the speakers and was immediately concerned at how wobbly they were. The Gaia’s direct on carpet didn’t feel secure at all and knowing I wouldn’t be able to leave them like that, I then added the carpet discs. This I found to be a right chore as aligning the discs with the feet in the position I wanted was not easy. Once completed it made me realise that small tweaks of positioning would not be possible with the stands and I was glad of the months of previous tweaking so I already knew my favourite position – definitely work out the best position first if you too have to use the discs. The stands are much more stable with the discs but will still move if lightly pushed in any direction.

I have made other changes since adding the Gaia’s so I’m having to go on memory, but alongside lots of subtle improvements there were two that stood out most; first, bass. Although counter intuitive to everything I’ve read or thought I knew, the bass improved in the most classic way, there appeared at first to be less of it but what was there was much more discernible with different bass notes and variations becoming much clearer (other changes since have properly increased the bass level, but the control has remained).

Second improvement is one I always struggle to define, it seems to me more about the feel or the flow of the music but I’m not sure what factors contribute to this. Perhaps an enlargement of the soundstage and space around instruments goes some of the way and maybe its just the additive effect of lots of small improvements.

Anyway, as you’ll have guessed, I kept the Gaia’s and see them as one of the better tweaks I’ve undertaken – well worth a try, especially with a Marten endorsement.

Thanks for the information which is surely useful. The Gaias will surely be my next upgrade. In my case it will have to be Gaia II as the added mass to the stands has increased the overall weight of the speakers where the capacity of the Gaia III is likely to be exceeded.

Oh my, I never even thought about the weight of the stands when picking the III’s. It looks as if my total weight will be very close to the III’s limit so I’m going with just about OK. If I was buying again, I’d also probably go for the II’s.

I used to use blu tac but after reading on this site about it damaging speakers I became paranoid and have removed it for now. At present I have a makeshift solution where I have covered the plate with vinyl coasters (as in coasters looking like records). These are very thin, very sticky and as a makeshift, seem to work rather well. However, I feel something different and perhaps designed for purpose might bring an improvement.

It will largely depend on the weight of the stands, whether they are filled or unfilled. If I didn’t fill the stands with sand (aluminium oxide), the Gaia III will still work. After adding the additional mass, the total weight of the stand and speaker has gone above the 32kg capacity of the IIIs, registering approximately 37kg on the scale. If your stands are unfilled and the total weight is still below the capacity of the Gaia III, it would still be fine.

Wise choice to remove the blu tac from the speakers. I used to have blu tac on my Proac and PMC bookshelves many years ago but stopped using it after I ran out of the blue stuff.

The stands are filled so it will be borderline. I can’t easily weigh them but I looked at the foot and there is still movement within the isolator, suggesting it’s not fully compressed (convincing myself). Maybe when I can’t think of anything else to tweak, I’ll try the next size up.

Maybe when I can’t think of anything else to tweak, I’ll try the next size up.

….or maybe try the Townsend podiums even

I used these vinyl record coasters under a Dac in the past on a wooden surface. After a couple of years the coasters perished and left a right old mess on the furniture and Dac. Recoverable but unpleasant.
Replaced with silicon blocks which are now brilliant under a Muso and don’t degrade.

Thanks for the heads up; they were meant to be temporary but as they seem to be doing a good job, there is a danger they would become permanent.

Just got these, Isoacoustics Gaia II. Will make the switch in a day or two after spending some final hours with the standard spikes. 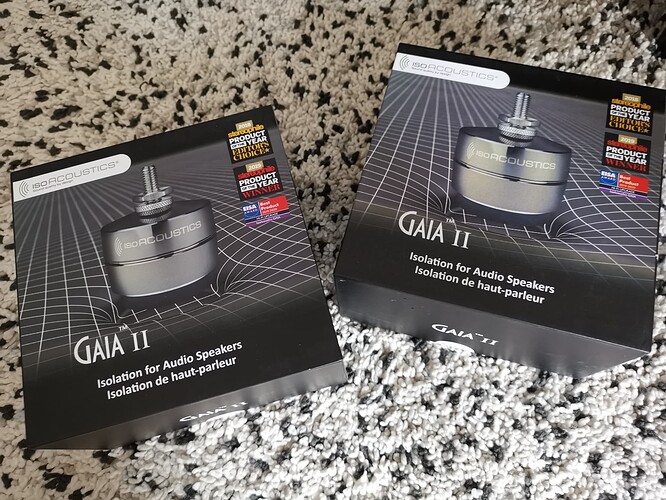 Be prepared to be pleasantly amazed.

I’ve heard this Luxman before, but I want to compare it to Yamaha.
On the other hand, I have the opportunity to buy at a very good price, Audionet SAM 20 SE.
Unfortunately I can’t listen to him … and I don’t know what to do.
I really like how the speakers with Luxman 590 AX MK II sound … it’s a gorgeos sound … but SAM 20 SE also has good reviews.
Has anyone listened to SAM 20 SE?
The only thing that bothers me about Luxman is its size … it is a massive amplifier and emits quite a lot of heat … otherwise it is exceptional …
What to do ???

Get a proper amp?

Dilemma solved. I went to Bucharest and took the Luxman L-590 AX MK2. In my ear, the combination of Marten Duke 2 and Luxman sounded best (from what I’ve heard). There may be much better solutions, but unfortunately I had nowhere to listen, so I did not have the courage to buy without listening.
It sounds good - from my point of view - a delicate, sweet, detailed sound, with a tight and strong bass that goes down enough.
It really is an exceptional sound, clearly surpassing all the other amplifiers listened to. (Some even more expensive than Luxman)
The speakers have 8-9 hours of operation (even if I bought them 3 months ago) so I’m curious if they will change their sound in 80-100 hours …
Now … I need the source …

Opinions about Luxman D-03X? I listened to it yesterday, together with the amplifier, and on the CD side it sounds very good … Would there be a better option? But in the same money …