Metadata issue I can't figure out 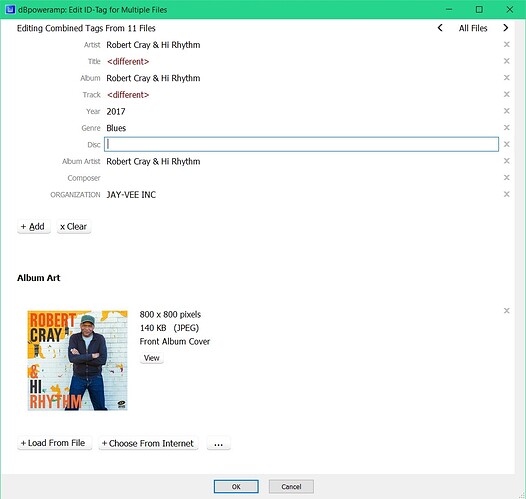 I’ve gone in to the Naim app settings and rebuilt the music database but that made no difference.

UPnP server is Asset 7.2 running on a QNAP NAS with the latest firmware.

I’ve got a similar problem with a couple of Lloyd Cole and the Commotions albums so hopefully if I can get Robert Cray sorted Lloyd Cole will follow. Any thoughts most welcome!

Do they both play? Could one be an mp3 version and the other say a flac? Have you tried searching your file store in case there is a version in another folder

I had the same, or similar looking, problem only last week on two different albums.
On one I found the Album Artist had been written in the tag field twice (or more)
(I note this is not the same on your example)
I highlighted all the tracks & dBpoweramp * saw Album Artist was showing . I wrote over that tag with the Album Artist name so it changed all tracks to show the same identical field (not ).
The other album had incorrectly tagged track numbers & rewriting these fixed it.
Whatever it is with your album, I suspect something along those lines

Another thought - change the song title just a bit - e.g. add a character then see if it still appears twice

Yes they both play and I’m confident I only have the 1 flac version on my NAS.

However, if I browse the server with Artist -> All Artists I see the album showing up twice. If however I browse Artist -> C… then it only shows up once. I guess if that’s the case it must be a bug in Asset?

I would try making a minor change to the metadata as suggested. Its a trick I used that has been successful many times over my IT career. It may fix it, or at least provide further diagnostics.

As a last option, it might be a solution to erase all metadata and add this manually …

Glad I stumbled across this thread.
I have recently installed verion R7.2 with twenty days remaining on the trial onto my synology NAS running DSM verion 6.2.
Prior to installing Asset I had been using Minim Server with no problems but after reading many threads with Asset recommendations I took the plunge and uninstalled MS.
Graphically I like the way Asset displays and is easy to use. However, yesterday seeing all the Bowie fans playing his music hear on the forum I decided to listen to a few. Opened Asset selected B for Bowie NONE! wondered if it was in D for David Bowie NONE!
Opened MP3 Tag and checked all of my Bowie tracks / albums and everything in order. I returned to Asset and began to notice quite a few things a rye. 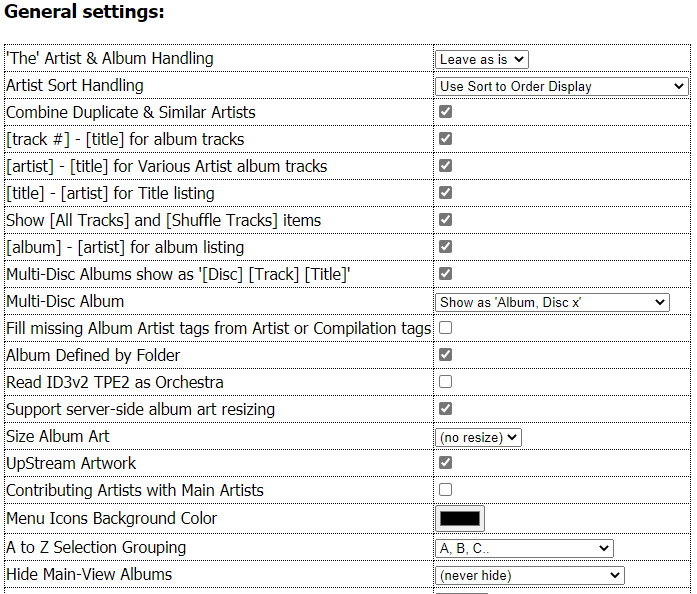 This is how I have my Asset set to sort etc.
Several instanced like The Doors are not sorted under T for The but in D for The Doors; Bryan Ferry is listed twice - again checked MP3 Tag - everything as it should be.
I am currently waiting for Asset to finish sorting my music but as there are over 2400 it takes a few hours - will let you know if anything has changed.

Might just uninstall Asset and go back to MS which is not as graphically nice but did the job.

I am currently waiting for Asset to finish sorting my music but as there are over 2400 it takes a few hours - will let you know if anything has changed.

Might just uninstall Asset and go back to MS which is not as graphically nice but did the job.

First, let Asset finish scanning your library, not will show correctly until thats done.
You might then try changing your Configuration to how I have it, it sorts the ‘The’ as ‘Doors, The’ 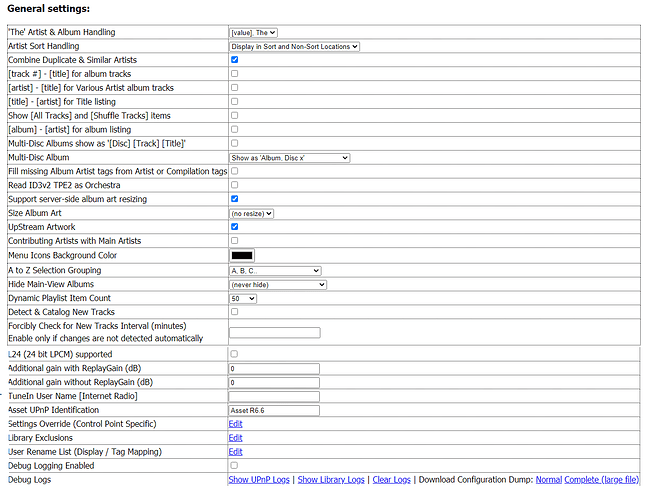 Thanks for reply Mike-B.
I have a typo error should have been 24000 so it takes hours.
I would like all the artists prefixed with “The” to be in the “T” folder along with most of the bands “The” who ever. Most are, The Doors was just an example The Who and say The Beatles are all under T just how I expected.
I will try some of the different choices you have and se if that helps but that will be tomorrow - thanks again - as they say every little helps…

OK best of luck when you get there.
I’m a 60’s child & with bands all calling themselves ‘The’ something, we always dropped the The, so it was Beatles, Stones, Who, Faces, Nice etc… so I have Asset set to drop ‘The’, just seems natural.

Yes I see what you mean - same here.
If I can’t get what I want, I will follow your example - no problem.
Just a bit concerned where on earth David Bowie has gone as this is one if not my biggest artists with I think over 371 titles - which I am wondering is causing the problem, thats without checking if any other artists has gone AWOL! 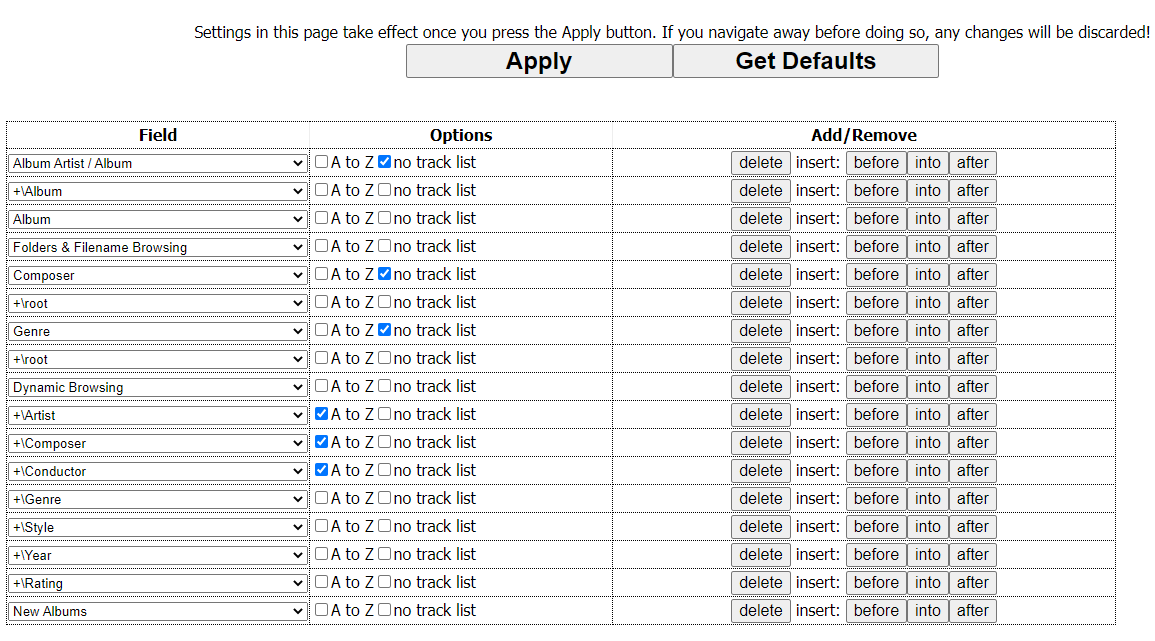 Well I found David Bowie he has appeared under artist search B.

You need to stick with this, its something simple, maybe look at metadata.
My David Bowie’s are all in the D folder along with all the ‘D’ first names.

Sorry if this is irrelevant, but there are some other metadata values that could be at play here. As well as artist, there is album artists and artist sort order and album artists sort order. If you have these set, I think they can mess things up a bit

Indeed! That is the reason I suggested to delete all metadata and start all over again …

Whilst trying to sort my order faults out I also came across an instance such as you have.
I opened the first instance and could only see one track - when opening the second instance the rest of the album was there.
When I opened the album in MP3 TAG the Album Artist was showing . 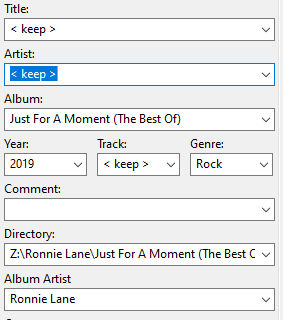 Using the drop down it showed the artist and another with the original artist and Eric Clapton.
I selected the Album Artist to Ronnie Lane pressed save and that has fixed the two albums showing in the app. 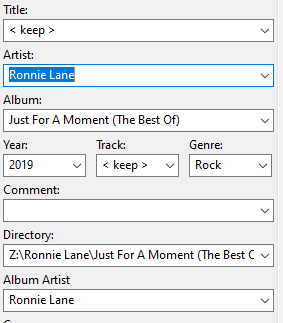 Thanks for trying to help Mike-B, I changed to copy the sttings you provided but nothing worked - in fact certain artists went ballistic with same album being replicated for each track on the album.
There were a few genuine metadata issued which were easily rectified without having to reset values and scan the data completely.
Ironically I have reset to default values and rescanned and David Bowie is showing in the B folder as David Bowie but in the correct alphabetic location!
No joy what so ever with bands beginning “The” except for The Animals. I changed the artist and album artist to Animals then back again to The Animals and this is the only instance were they were placed under the T folder!
Crosby Stills and Nash for example is found in the N folder for some reason no matter how I change the artists names around - very odd that one.
I am still going to change back to Minim Server as everything just worked - Asset is too complex for me without knowing what all the alternatives are and what happens when you change something or what you should expect to see.
Thanks again for taking the time to help - it was much appreciated.