I’m looking for help on a metadata error I can’t figure out.
I bought a replacement Fourplay ‘Fourplay’ album from Qobuz.
It plays OK but the album doesn’t display correctly on the app using Asset UPuP
The greyed out Album Artist name “Fourplay” under the album title doesn’t show.
It looks like it’s missing from Qobuz, it’s the same after a reload.

NB: don’t be confused, the album is Fourplay by Fourplay 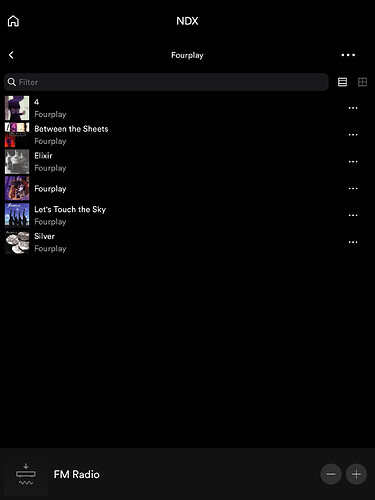 Have you tried editing it using mp3tag ?

I think this is a bug, I’ve not established if this is Asset or the Naim app that is at fault.

I already had the Fourplay album you have and it does the same. It also does it with Anuna, Anuna so I think it’s thinking there’s a duplicate and removing one of them. 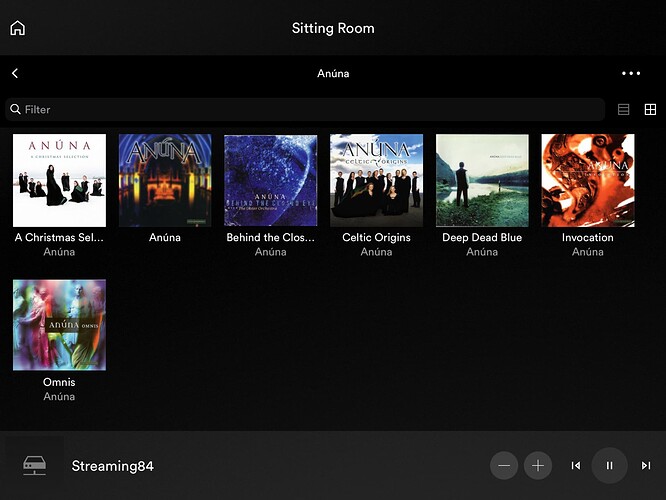 Yes & a lot more ….
I’m pretty sure it’s a bug, I will figure it out eventually, but it’s a busy time & was hoping a meta geek on the forum has seen it before

Hi Richard, looks like we’re on the same page.
Fourplay by Fourplay
Anuna by Anuna

I will try a rename as an experiment, Foreplay by Fourplay
But that’s for later next week, time presses

I will also ask the Asset folks forum

Fourplay by Fourplay
Anuna by Anuna

) but given that it does this for both these albums, might it be by design that it shows the name only once if artist and album name are the same?

Edit: I looked through my Qobuz albums in the Naim app and found Chic by Chic, and both album and artist are shown. However, did not check over UPnP because that’s not running and I’d have to boot the NAS and all. Do you have other eponymous albums?

Hi Suedkiez, yes I have some other albums with the same.
I’m now pretty certain it’s an Asset UPnP problem & I’ve posted them on it.
If I get a solution, I will post it on this thread.

I trust you indeed for all network, pc, metadata….environment. As Crystalgypsy or Simon S.
For Unitserve or Uniticore: Chrissu and David Hendon.
For cabling and connecting: HH and James
For Naim history and Naim specs : Richard Dane
For vinyl quality, labels, sound quality of reissues…: Richard Dane and Dreadcontrols
For Naim set up optimisation: Dark Bear
Lp12: Cymbiosis and some others
Mains , electricity: Mike B
New lp arrivals: The Kevster
Non exhaustive list of course….
Room acoustics and treatment: Thomas and Peter R
General scientific knowledge: IB

It even applies with decent music.

Under artist it shows all the albums, and where the album is the same as the artist it just shows the single description. When you go into the album it shows both artist and title.

Is it really an issue? Not to me.

No its not an issue, far from it, I only noticed it yesterday for the first time & looking around I have other bands with the same.
When I found it yesterday it was during the need (again) to fix Qobuz file nomenclature & metadata problems. That set off my OCD driven techie-geekness & I want to find why & how to fix’um.

Any-ol-howz, we’re off to the first family Christmas bash for 2 years, techie-geek needs to get back in the box.

That’s the spirit, Mike. Put Mr Dull back in the box of dullness and get Mr Party out. We ran a sold out show last night with Kanda Bongo Man and I’m just waiting to do down with your know what. But I’ve tested negative this morning, which means I can go out for our WemsFest Christmas meal in the pub tonight. When we are locked down again in the new year there will be plenty of time to fiddle with pesky metadata issues. Enjoy your time with the family, it’s just so important.

Mr Party has a hang-over, the cure is some eye strain on the 'poota 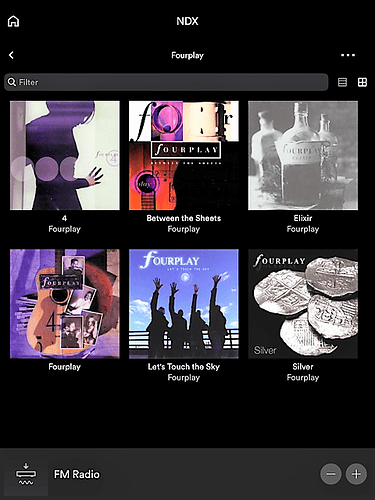 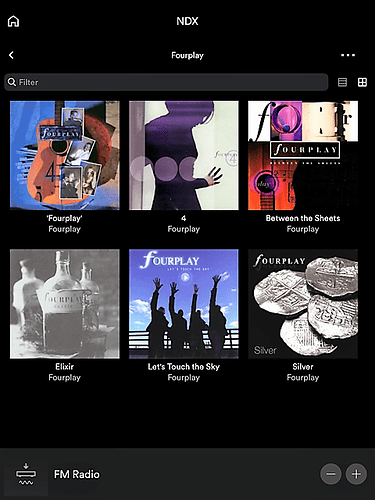 I posted this problem on dBpoweramp/Asset forum.
They asked for a log of the problem & have confirmed that the problem is in the Naim app.

The problem is in artists (bands, groups) with self titled albums when the album artist name & album title are the same
In my case I found it with the group Fourplay & their album Fourplay
It plays OK but the album doesn’t display correctly on the app.
The semi.greyed out Album Artist name Fourplay that should normally be under the album title Fourplay doesn’t show.

I asked the dBpoweramp/Asset forum & their design people have replied that the problem is in the Naim app
In my case it’s iOS 5.23, iPad on 15.2

… they analysed the problem using my log data (the IP address in the following is mine)
“Here is the info we send to the Naim app:”

I’ve received a PM from Naim on this issue
They see the problem & the app team are investigating.

@pocklefo Hi again, you indicated the app team are looking into this, do you have an update ?

@pocklefo has moved on I believe.

pocklefo has indeed departed Naim for pastures new so I am just catching up with this one.

The above behaviour is not so much an issue but a design choice that we may review the next time we are working in that area.

’m looking for help on a metadata error I can’t figure out.
I bought a replacement Fourplay ‘Fourplay’ album from Qobuz.
It plays OK but the album doesn’t display correctly on the app using Asset UPuP
The greyed out Album Artist name “Fourplay” under the album title doesn’t show.
It looks like it’s missing from Qobuz, it’s the same after a reload.

NB: don’t be confused, the album is Fourplay by Fourplay

Use dbpoweramp software for that

Use SongKong to correct Metadata, I use it myself with WAV files installed on my Melco! Perfect tool!!