Hi,
I am thinking about a new car for me and would like to get a purely electric model. We have several types at work, mostly BMW i3 and eGolf. I like the driving experience with both and fondly remember the few days I had a Mini 5 door for a test. Both are combined in the Cooper SE.
Has anyone used the Mini and is willing to share her or his experiences?

Range is v limited - quite a bit worse than the i3 from which it takes various bits. My biggest observation is that it seems quite marmite - have seen some people say it’s really fabulous and they love theirs, while others have found them unpleasant to drive. Or at least really Haven’t liked them. So definitely one for a test drive

That’s not much help is it?

Hi Tim,
thanks for writing. Driving a Mini is different from most other cars, including the i3. I can see why it can raise these opinions, unless those who dislike the electric like the petrol version.
A range of 200 km would cover 99% of my trips and my wife has a larger petrol engine car for the rest.

I worked out yesterday that I have done something like 10 trips over 300 miles in a day in the last 3.5 months so the mini E is sadly no good for me. Oh and far too small too.

I had forgotten about the Honda, but it looks to small for me. For some reason Mini and Fiat have no problem to create enough space for my nearly 2m tall body inside small cars. Japanese and French cars are, for reasons unknown to me, not as accommodating.

The range of the eMini is nominally about 140 miles, although in real life, especially in the winter, it is likely to be a lot less. It seems they use a battery of this capacity to keep the price down. So it is unlikely to meet everyone’s needs.

The economic gist of a review I scanned in one of the Sunday glossies was that, given the price, you would need to own the car for quite a bit longer for it break even over the petrol equivalent, assuming average mileage.

(I fully realise you asked for experience.)

I ran a diesel Mini Cooper for a couple of years, a 64 plate. Not electric but you’d do well to have an extended test drive if poss. It was a fun car and probably quicker than the 205 1.9 GTi I had 30 years ago, but…

It was like driving an excitable puppy. Fun at times but at this age that’s not the main draw. Firmly sprung, sitting v low and on enormous tyres for the size of car meant it was still firmly adhering to the original: like driving a go kart only this one had all the toys and could do any speed you fancied and could get there v quickly. Tbh I grew bored of it and swapped it for a nice Volvo.

Check out rear passenger leg & head room too. My two were late teens & early 20s then and hated being squeezed into the back of a 2 door for any longer journeys. And probably not an issue for the current range but the Bluetooth on mine was phone protocol only so I couldn’t play podcasts through it with the phone casually lobbed on the passenger seat - it needed a length of cable to do that.

So yh, great car but horses for courses and all that. Make sure it really is what you want.

The trouble with an EV with a shorter range such as the Mini is that in reality you kind of need to be fully charged all the time before every journey. This adds too much stress in the real world and doesn’t quite work as it might seem even if it covers all your usual commute in theory.

One essentially needs to halve the range on paper to get a real feeling of what will be needed having an EV. So with the Mini - if its range in an ideal world is 115-120mls (that’s what it is I believe) you would get (easily) 35% less if driving on a motorway with your air conditioning on, and even more so in cold weather - that leaves you with 70-80mls range to consider. Add to this any unexpected small detour, journey or need and you are done.

As such I find the Mini not ideal for anything more than same small town commute and shopping… in the summer!

We’ve test driven one and placed our order. It will be our second car and will do short trips which will seldom, if ever, depend on the public charging network. Within two years it’s our aim to run it from solar generated stored power. It’s a tentative dip into EV ownership, part of a bigger domestic power generation/storage plan and will (or possibly may not) pave the way for a big, longer range EV which I can use for business and we can drive over 300 mile distances between charges, if it is necessary to do so.

Five years ago, when I was buying my present car, we had a look at the i3 as a possible second car candidate. It was clever and we liked its driving characteristics. The seats were uncomfortable, the driving position felt like sitting in a torture device, it had a boot about big enough for a box of tissues and the scissor door arrangement is a joke unless you are one parking space width away from anything like another car or a wall which will trap you between them. Notwithstanding the battery, the boot size was a shock. It’s a big car on the outside. A MINI boot is actually bigger – you can probably get two tissue boxes in.

This Autumn, we decided the time had come and started looking again. Before we looked at the Mini we tried the Honda e. It’s a wonderful little thing and very tempting. But it’s unfinished on the inside. The build and material quality just aren’t good enough for its price point. The camera mirrors are cool, but you can’t move your head around to change the angle of reflection, so it doesn’t work like a mirror.

We were willing to live with the few compromises of the Honda, but the MINI deserved a look. My wife wanted a small car so the Honda and MINI were the only candidates with enough appeal to make us inclined to spend. The second-generation MINI was obviously built down to a price and marked a low point IMO. The latest generation (which is being replaced next year) is back on track for build quality, particularly interior. We can both get our perfect driving position. It drives exactly like a MINI should (fun, accurate, good chassis feedback) and it’s swift. It’s the type of EV we want in a well-built, premium and fun to drive package.

I couldn’t use if for business because the range is too short and it’s too small. Being a MINI it’s a happy little thing and a bit like a bouncing puppy. Huge fun, a lovable companion, but not the best solution for a 150 mile drive home after a 16 hour working day. As a local run about which will seldom do a trip exceeding 50 miles and will be driven mainly into nearby towns and cities, it’s the best fit for us from what is currently available.

We ordered a Level 3 in late October and it should be here in April. In the UK the rebate for domestic charger installation in owned property expires at the end of March 2022. From then it will only be available to landlords who wish to make their property EV friendly and tenants renting. Ours will be installed in January (Andersen A2).

thanks for pointing out the limited range. My car is the second car in our family, my wife drives the bigger one, and I have a trip of approximately 20 miles to work. The car can and will be charged overnight at home. A real range of about 80 miles does cover more than 90% of my trips. Only the Hi-Fi dealer is farther away…

I use the BMW dealer network for my car and they let me have a play in a nice variety of loan cars when I need one. These have included a first generation BMW MINI and a second generation one. The only third generation model I have driven was the MINI e demo car and it’s the best MINI we’ve ever zoomed about in. The BMW MINI has always been a good drive for what it is, but the second generation one seemed like a collection of cut corners in perceived quality, particularly the plastic fantastic, shiny interior. It still drove well though. And it was still cheeky and charming.

For a small range EV like a MINI the distance of the dealer isn’t such an inconvenience. You won’t get much in the back of a MINI, although with the seats down you might get some short interconnects squeezed in! 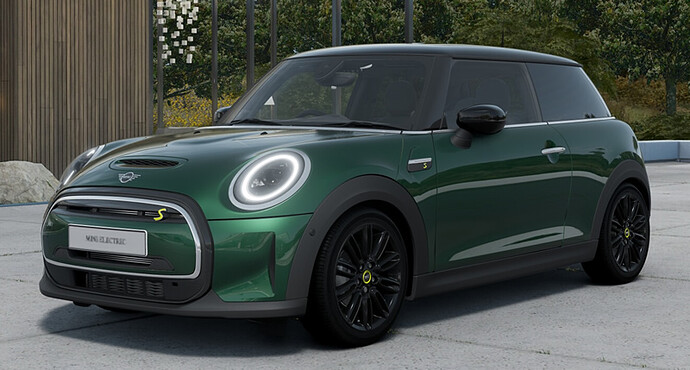 There’s only one generation of eMini just introduced this year, I believe

Yes. And a new generation (4th) next year, although I don’t know when the electric version will launch.

A neighbour has one, as one half of his/hers Coopers. They installed a charger, and as they live at the bottom of a steep hill in a very rural location and are ten miles from the nearest large towns, although Stroud is closer, they are happy with its capability.

Only the Hi-Fi dealer is farther away…

yes, those detours I was referring to…!

In the meantime I have some more research and had a few chats with my local Mini dealer. If things work out as planned I will get a Cooper SE test drive in a couple of weeks.

Any idea on delivery time? Lots of manufacturers quoting 6 months or more (sometimes a lot more) for new car builds at present. Chip shortages and other supply problems mean lots of uncertainty. Worth asking the dealer.

My Kia EV6 has slipped back from April to maybe July. Ordered first week Dec.

Probably at least 7 month, according to the friendly saleswoman. I didn’t ask to many questions and won’t until I have driven one. Luckily my current car is in good shape and I can make my mind up without any pressure.