Hi all
Having used ‘Minim’ for some time now, tried alternatives - didn’t like the app layouts for finding my music (sort order etc) & no difference in sound quality. I convert some files (flac to wav), but if I do convert - my playlists on the Naim app can’t find the tracks; laziness on my behalf in not redoing them.
Now to my question:
If I do set minim to covert ALL my files to wav: do I set the thing to go up to 24 bit too, does it improve anything - don’t want to have to re do all my playlists yet again?

Thank you in anticipation of your replies

Presumably you mean transcode rather than convert - ie turn flac into WAV on playback while leaving the files in their original format. It’s sensible to set it to transcode.

I tried the upsampling with Asset and I found that it blanded out the music, and posted about this at the time. The general consensus was that it’s not a good idea.

I agree with HH BUT, I think you need to do some tests to prove this to yourself.

When I used an NS01 > nDAC/XPS I preferred WAV. Now using Minimserver I am very happy with flac transcoded to WAV.

With upsampling:
I have never enjoyed PC based upsampling. With the M-Scaler it is a completely different beast!

If you do the experiments I’d be interested in your thoughts.

If you’re curious, you can always make copies of a few albums and convert them to 24 bit just to see if you can hear any difference, but I very much doubt you will hear an improvement.
Personally I would not transcode my whole library to WAV. It will use quite a lot more storage space. Better to set your server to transcode ‘on the fly’ which Minimserver, Asset and some other servers can do. Then you have the benefits of smaller file size and easier metadata handling of FLAC, but the streamer will see WAV which, especially on the older generation Naim streamers, can sound a little better than FLAC.

If you start with a file of say a million bytes and “transcode or upsample” to a higher number, are not you still limited by the original file? I mean if you have a 24 bit file in WAV fine. But are you talking about converting a 16 bit FLAC to a 24 WAV? I don’t get that

Transcoding turns it temporarily from flac to WAV. That should sound better because it means your Naim streamer has less work to do when it unpacks the file into PCM to play. So transcoding is entirely sensible, especially for the legacy platform streamers.

Upsampling from 16 to 24 is different. The server adds zeros to the data to make it bigger. And in my experience it sounds worse.

Many thanks to you all. In my original post my descriptions & ‘terminology’ wasn’t great

- apologies.
My files are of varied file types, although recently I’ve made them wav files as standard when putting a new cd onto the network drive (PLENTY of space on my drive). After setting minim to transcode flac to wav my Naim apps ‘playlists’ would miss the transcoded files when I played the list & had to remake the playlist. I thought I’d ask before upsampling everything to 24 bit, then not liking the sound & having to redo the playlists again - I’ve now tried upsampling; it doesn’t improve anything, in fact I think (my old ears) it made the sound slightly worse. So I’ll be using minim to transcode all the various file types to wav, then redoing all my playlists, when I’ve got the time to do it

Transcode to WAV makes sense, I would advise to upsample…

My files are of varied file types, although recently I’ve made them wav files as standard when putting a new cd onto the network drive (PLENTY of space on my drive). After setting minim to transcode flac to wav my Naim apps ‘playlists’ would miss the transcoded files when I played the list & had to remake the playlist.

I had plenty of HDD file space, but I was getting very annoyed with some of the www music vendors screwing up or not embedding WAV metadata, & others no longer offering WAV as an option (OK its easy enough to convert, but its still annoying)
So I just bought FLAC & had my Asset UPnP set FLAC to ‘play as wav’. Then I looked at converting my whole library to FLAC (but not including the DSD albums) & that was remarkably easy using dBpoweramp batch converter.
Now with everything FLAC or DSD, & Asset transcoding FLAC (play as wav) & DSD (play as is), its just so trouble free. And I no longer want to kill those idiots at Qobuz.

As for upsampling, forget it, as HH sez, it sounds worse, flat.

When I had a 272 I set Minim to transcode to WAV on the fly. This gave a small but worthwhile uplift in SQ. With my Atom, TBH I can’t hear a difference between transcoded and direct and the same applies to the non-Naim streamer in my main system. So probably an issue primarily with legacy gear or for folk with golden ears.

Does anyone knows how to reorganize those folders at MinimServer ; for example “Albums” as a first, etc.?

The latest apps now have a sort option in the A-Z, touch on the actual A-Z & a pop up shows Alphabetical or Server Default. It does not allow you to sort at will but it gets rid of the useless no purpose in life Alphabetical display

Thanks Mike,
is there any option to reorganize through the minimserver (via browser)?
I know that paid version offers some extras

I don’t know Minimserver that well Kacper, its been a while since I used it.
I can do it on Asset by re-config the browse tree order (done in Asset GUI config edit),
I have mine set to show my most used browse path first, then the next etc. 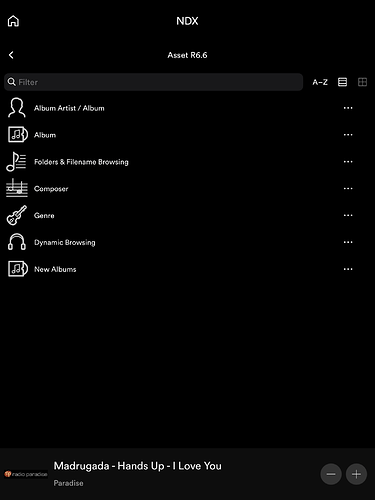 I use Minim (and love it) but don’t know how to do this. However, the author is very quick to respond on the Minimserver forum.

Thanks, I have send him a message

Does anyone knows how to reorganize those folders at MinimServer ; for example “Albums” as a first, etc.?

Yes, the tags appear in the order in which they are listed in the indexTags list. Just change the order, restart MinimServer and you will see the tags in the new order in your control point.

If you use MinimWatch, you can edit the order of the tags of indexTags by just clicking the MinimServer icon in your desktop and selecting Properties. Modifying indexTags also allows you to get rid of the tags that you do not need and to index those that you want to be displayed in the control point. Here is a screenshot: 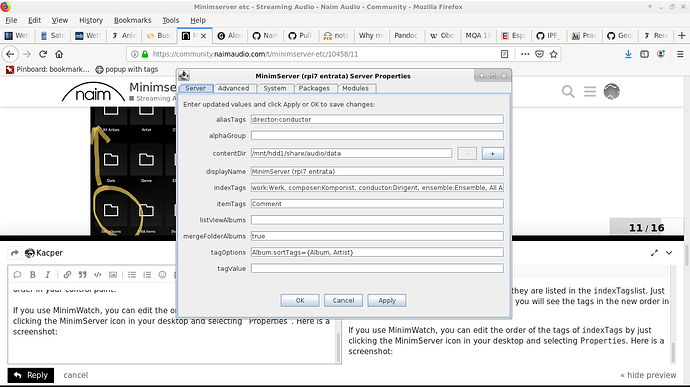 thanks! I will try but honestly in this Minim properties tag I don’t see any folder “albums” 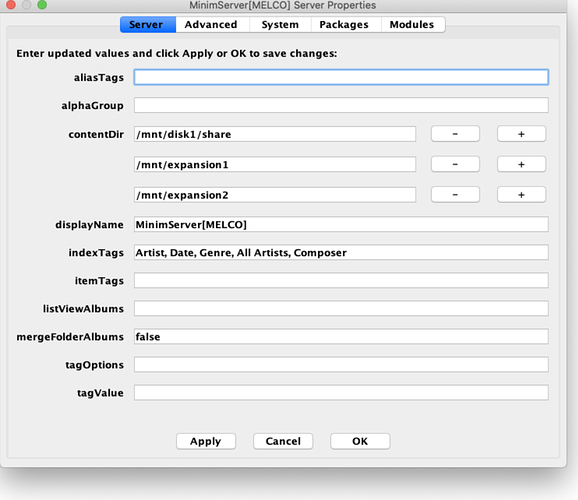 It’s not needed as it’s generated automatically. The ‘n’ Albums and ‘n’ Items tags should come first in your list if you let the server rather than the App do the sorting. They’re followed by the tags you specify in the indexTags property, in the order they appear there. There’s lots more info on this in the Minim user guide.