Are there any differences in playback from a MFSL gold cd when run through a uniti core? I saw a Pink Floyd DSOTM Gold CD at the used music store yesterday and thought of trying it out but kind of an investment if not really any different in sound quality when put through the core.

Hard to know how much difference the gold plate makes as there’s no standard silver version of the MFSL disc with which to compare. I’ve ripped all my MFSL CDs (I say “all” - I don’t have more than 10 or 12 at most) and the slightly different mastering (and lower mastering level) is certainly still evident in the rips.

I have this cd and it brings a level of detail that the standard recording back in those days did not reveal and with a certain warmth as well…….worth buying imo if going cheap.

Thanks guys. I think I’ll pick it up. Hard to know if it’s cheap or not these days but $50 US seems fair.

My Steely dan one eventually had stress cracking and i looked to replace it…….i was shocked at the price……i would buy at that price.

As you have a Uniticore, why not buy a hires version of that album? It should, or may very probably, sound better vs the gold cd, and at a lower cost.

Good thought. Still don’t think of just ordering hi-res downloads. Kind of like the idea of owning the “hard copy” of this one though.

Unless they use the same mastering it’s apples and oranges. For me a good master makes a greater difference than hi-rez or gold plating.

I understand you want to touch the physical copy. However it will disappear inside the Core.
You can try to buy just one track on Qobuz, to see how it sounds. 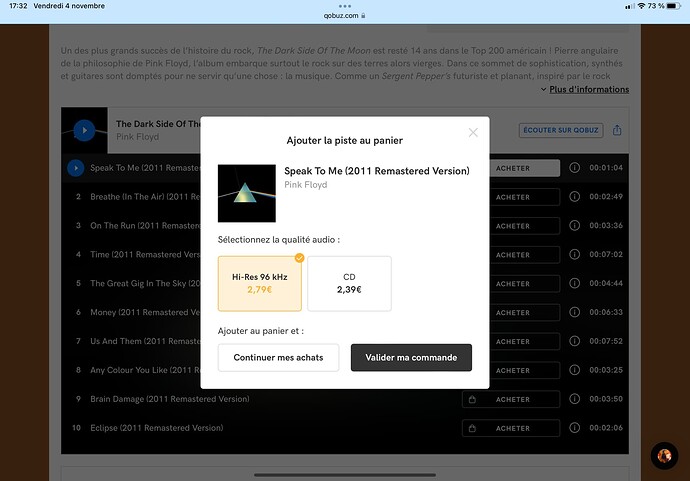 For quite all of us I would say.

I guess you fellows can’t download HiRez from say HDtracks ? I will say the DCC remasters done by Steve Hoffman on gold disc are amazing.

The gold plating was used to increase reflection and so to reduce reading errors. Whether this holds true or not I don’t know. Also gold should have a better resistance against oxidation compared to aluminium. And it looks good! [When hold up against daylight gold discs shine through in a nice green shimmer - the absorption spectrum of gold. NICE!]

The real reason for the high prices of MSFL gold discs and LPs - even in their day - was the usage of the original master tapes and the mastering on especially selected equipment. And as Richard said this can be heard on rips as well. Whether you like it or not is a matter of taste.

I bought a lot of those MFSL/DCC and Sony Mastersound gold discs when available in the music stores. Even then they were really expensive but so much better than the - sometimes really shabby - CD masters of the late 80s and early 90s (loudness wars and all that cr*p).

Today modern masters may be close to the MFSL masters - but different. Your choice!

Pink Floyds Meddle on the MFSL gold cd is one of the best sounding CDs I own.

And last but not least MFSL is back in business - but no golden CDs anymore.

I had both the MFSL Gold and original Capitol (US) silver versions. I ended up keeping the Capitol issue and selling the MFSL on.