So currently I am using a Samsung Note 8, with a Cyrus Soundkey DAC, through USB Audio Player Pro, headphones are Shure e2c, and Sony WI-1000X in wired mode.

My use at work has increased due to open plan style offices, so at first noise cancelling was priority for which I have the Sony WH-1000XM3 and the WI-1000X.

I tried and failed with the Chord Hugo 1, but trying decide on.

My main concern with option 2 and option 1 is I have to be on WIFi to make use of Qobuz or Tidal.

My take on headphones is that noise cancelling is great for long haul flights where there is a constant noise that they can effectively cancel, but more or less ineffective for other, more sporadic noises such as human voices. So I would go for a good pair of IEMs, with tips that give a good seal, which is absolutely vital for both isolation and sound quality.
I spend a lot of time away from home, and I use a Sony NW-ZX2 now superseded by a newer model) to carry my music collection around with me, used with Shure SE846 IEMs. I also have a Dragonfly Red - needs must, as my iPhone has no headphone socket. The Dragonfly is very good, but I definitely prefer the Sony player for sound quality. (There was a comparative review of these two items, which said that the Dragonfly was better - possibly with different headphones - but for me, the Sony wins hands down.) I haven’t heard the new Cobalt, though.
The other issue I have is that connecting any Dragonfly to a phone is cumbersome. It doesn’t sit neatly in your pocket, or even in your hand. It also drains the battery in your phone. So I much prefer to use my Sony portable for music, freeing up my phone for other duties.
In terms of connections, my Sony player has enough local storage for my needs, but also has UPnP built in, so I can use it to play from networ storage if I need to, as well as from web based streams such as Tidal.

I have the Sony WH-1000XM3 and find the noise cancelling to work well with extraneous noise including voices. I just use Bluetooth AptX and FLAC via my Android phone which is adequate albeit not on a par with a conventional system. I have a 200Gb SD card which stores a good selection of our ripped CDs.

Thanks @ChrisSU does the Sony allow music on the go with Qobiz and Tidal local downloaded music?

The Sonys for noise cancelling I love, but want to focus on SQ, as before it was occasional travel or at work, but now more regular.

Yes, it runs a version of Android, so you can run apps like Tidal, Qobuz, BBC iPlayer etc. on it. The model that replaced it is different in this respect, as they have focussed on maximum sound quality from local storage. I believe @BertBird and @james_n have upgraded from the ZX2 to more recent models, so they may be able to shed a bit more light on this.

The Qobuz app allows you to listen to music offline – it’s really great. I use it all the time.

For mobile streaming I use an iPhone XS running Apple Music, which is streamed high bandwidth AAC and it is rather good … especially with typically mobile headphones, air pods etc, enjoying several of Philip Glass works yesterday whilst on the train.
For me when in work, I can’t abide background music… I either work or listen to music… I can’t do both… perhaps that is just me.

As @ChrisSU already mentioned some of us have gone to the Walkman NW-1Z pure out of sound quality reasons. Given the pure design, no WiFi on board. So we have the music on internal storage or the storage card. However the device can also be used as USB-DAC which means that your computer or phone can work as Qobuz or Tidal source, this works well, while I personally tend to limit myself to my onboard music.
The Sony is the best or one of the best options on the market. I love the sound and the battery live which is unparalleled.

Yes but via Android and Apple the stock Tidal/Qobuz apps downsample, for Android USB Audio Pro bypasses this for the full SQ sample rate.

But annoyingly the USB Pro App you can only stream it cannot make use of localised downloaded data from Tidal or Qobuz.

I decided a whileback to just stream and not rip, though I did try with the Innuos server and again decided streaming was for me.

I hear Sony have a new Walkman due which has WIFI and Streaming capabilities.

Sound logical, the one before also could stream. This one however was only tuned to maximum audio performance, and that’s why they didn’t put a WiFi connection in, to avoid interference…

I have an iPad and iTouch 6th GEN, but I’m too far up the Android bubble and like it to run two ecosystems, although Android ecosystem is pants compared to Apple, but then Android allows me allot of o/s flexibility.

After much reading (on holiday much to my wife’s frowning) I’m heading to the USB DAC route, as the Cyrus soundkey works with USB Audio Player Pro, but for Tidal Masters not the final unfold and more important for longer listening is tiresome.

The AQ Dragonfly Cobalt is pricey (but I did also try the Hugo) but performs the final full unfold, reviews suggest an easier on the ear listen and I can swap between my mobile and laptop, just a spaghetti of wires to contend with.

via Android and Apple the stock Tidal/Qobuz apps downsample

I assume Sony have their own codec, but Android will always use its default driver, inky except is the new LG with HiRes DAC, it is how I stumbled across the APP as other apps all displayed a higher sample rate, but it wasn’t actually what you got if the Android driver took priority. 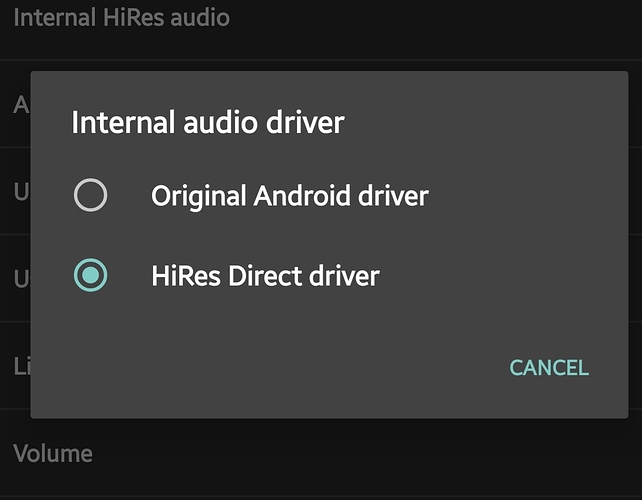 Not much wires really. I use this combo all the time and have no issues. The cobalt is tiny and fits in your pocket easily with a phone. Personally for on the go i would choose a good pair of IEMs rather than full and noise cancelling. Less heat for summer, no messing with SQ and good IEMs isolate a lot of noise. I wear mine at work and I can’t hear the rest of the office. You need good comply foam ones to get the best fit.

Most DAPs running Android customise the os to get around Androids resampling , I know all the ones from FiiO, Hiby and iBasso do. You cant get a full MQA decode on either iPhone or Android phones without USB Audio Pro and A DAC, apart from some LG models that have a special DAC in them. You can play MQA via both apps, but android always upsamples the output to 96/24 on the latest os used to be 48/24. Not sure what iOS does internally but with an external DAC it should output native.

I would look at DAPs such as the iBasso DX220 or FiiO M9 of you want a more elegant solution and not have native tidal and Qobuz offline files. You can also run Roon on them to.