Lovely models Paul. How do you go about making the valve gear in 00 gauge? I’ve always found it difficult to balance free enough for a running model without them being too loose.

Secret is in the hammer you use for the rivets and what you hammer on to. I have a granite chopping board and a very small/light hammer that I inherited from my father in laws dad (it’s old). You lightly tap and check each rivet one or two taps at a time until you can see the two parts are coming close together. Then repeat one tap at a time until the joint feels right, not too loose but not stiff. If it feels a bit stiff, just work the joint until it loosens off. Too tight and it can jam, too loose and it can bind. Treat each individual rivet as a mini project and you will get consistent results. I actually enjoy doing the valve gear most now whereas the first set was daunting. The other thing is to make sure that the axles are running perfectly smooth in their bearings. This is as important and takes a lot longer than most people think. When you think they are smooth enough, keep going with the running in until they are even smoother. Gives the valve gear and motor a lot easier time.

Thanks - very useful. Always pays to ask an expert! Good luck with the garden project planning, although I must admit I prefer the indoor variety.

How do you go about making the valve gear in 00 gauge? I’ve always found it difficult to balance free enough for a running model without them being too loose. 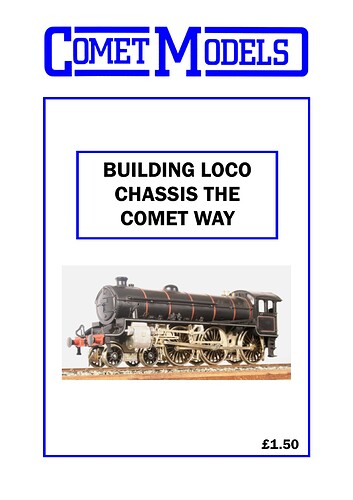 A comprehensive guide to the Comet way of building loco chassis. Either buy the printed version or download it for free.

Just to add, if you don’t get the rivet joint to your liking after several hammer blows the rivet can work harden and resist further deformation. If so, rather than risk damaging the holes in the valve gear parts I always found it better to file off the back of the rivet to extract it from the holes, then start again with a fresh rivet.

Thanks very much - I’ve had a quick look at that and it’s very useful. I’ve been using Ian Rice’s white metal loco kit building book which is pretty good, but I like the practical tips in the Comet guide.

When I worked in Norfolk for a large insurance company in the early 1980’s, I had to survey the premises of a model train builder based in a workshop at the rear of a building near to Sheringham town center.

The owner built engines to the scale shown in you photo. The engines were perfect miniatures of real steam engines & were all built to order. The detail was incredible & the owner manufactured all the parts himself.

On the day I visited he was nearing completion of a German shunting engine used in Word War 1 & damaged in a bombing raid on the goods yard it was working in, in 1916 (as far as I recall). He had built the unit up from actual plans supplied by the original manufacturer & the purchaser wanted the model built showing the bomb damage! The model had to be built ‘as new’ & then hand damaged by working from photographs of the loco taken after the raid.

The model was about £9,000 in 1982! I was told the new owner was a very famous high court judge at the time, who was, unsurprisingly, single, & lived with his mother in a large manor house in (I think) Yorkshire. The man building the engine said that he had supplied this judge with over £100,000 of trains & that they were scattered, untidily, all over the property. The garden consisted entirely of track to run the trains on.

He also said that the said judge was ‘as mad as a hatter’ & that he doubted he even knew what day of the week it was most of the time!

It may surprise, and even please, Members to hear that most High Court judges are sane, sensible and approachable people.

(Or they used to be when I had daily dealings with them over 20 years ago.)

I don’t doubt they are & would be seriously alarmed if they weren’t.

However, my experience of those who attain high office is that there is always the eccentric, or two, amongst them!

As I am sure you understood from my post, whilst the judge was a very well known figure at the time, I did of course never meet him.

I’ve always felt we needed more eccentric behaviour. It used to be a celebrated characteristic and sometimes changes the world!