Having a trawl through my nostalgia memories and hadn’t listened to Beatles for Sale in an age. Listened to it and it is full of ditties of a maudlin and angst ridden nature, very much of its time including the over twangy Adam Faith type guitar sound. Pleasant enough ditties but how did this ever propel them to the likes of Abbey Road or Sgt Peppers?

Is the title ironic as in sold their soul for success?

The opening three tracks, No Reply, I’m a loser. Baby in Black is fantastic (listen to the first three albums for a full effect of how dark these songs are). With more time in the studio, this album could have been a classic along with A Hard Day’s Night (My fav Beatles album). When they started recording songs for the album in October 1964, it was in the middle of a UK tour, so any spare time was a visit to the studio. The band had to finish the record for the Christmas market. If memory serves me correct, they didn’t have many songs written before the recording started.

I’ve always liked ‘I Don’t Want to Spoil the Party’ - a hidden gem.

I think the writing is pretty good but I don’t find it outstanding for its time. It is also very teenage angst and I now finally understand the appeal they had to young girls at airports.

There’s always the ‘Beatles For Sale’ EP if, erm, it’s all too much. 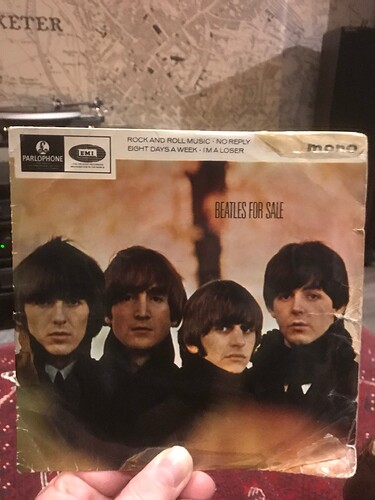 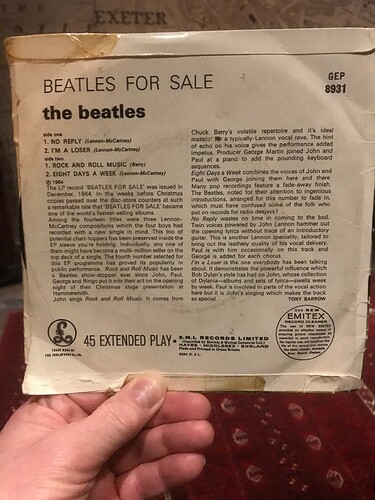 No I’m good with all their work. Lifelong fan but just wondering in retrospect about Beatles for Sale.
Edit: I hadn’t realised there was a short version.

The Mono version is vital over the stereo. When I listened to the early albums in stereo, I thought they were okay albums. Then when I purchased the Beatles in Mono box set, it transformed my opinion of these albums.

It was the mono version I was listening to earlier.

Six covers out of the 14 songs show how rushed it was, especially after all the compositions on A Hard Day’s Night are Lennon/McCartney.

Whilst Beatles For Sale is sonically decent I believe the album caught them catching their breath after the whirlwind / treadmill of the previous few years.The reliance again, on cover versions to flesh out the album that was required for the '64 Xmas market, showed how the pace was catching up with them. Even the cover shot of the weary “mop tops” was indicitive of the period I believe.

Also It is worth remembering that the “I Feel Fine”/ “She’s a Woman” single was recorded during the album sessions. Naturally, these two songs would have made the album stronger, if they had not kept to the policy of not including singles, amongst the fourteen album tracks.

Yes - imagine if those two tracks were on the album. Might alter perceptions.

Quite incredible output during this period. Nevermind the tours, films and pantomimes!

The Beatles were very ‘pop’ early on, and I didn’t like them before Help. I subsequently came to like isolated songs, possibly least from Beatles for sale, so maybe yes to the question.
The only albums I ever play are from Help onwards.

Unless I’m mis-remembering, I believe Keith Richards expressed the polar-opposite view to yours of The Beatles output in a radio interview a couple of years ago.
He described their later song-writing as having “sold out” but apparently admired their earlier simpler music.
Each to their own I guess!
Personally I love their stuff from Day 1 through to the end of their time together (and even beyond). That’s why we’re all still talking about them 60 years after the band’s origin.

Some of their later music is among my favourite of all time (particularly Abbey Road, but also Let it be & Sgt Pepper.) But they morphed into psychedelic/prog, not pop, and in general I Ihave never liked pop, but prog rock is my favourite style - perhaps because I started off only knowing, and loving, classical.

As for Keith Richard’s opinion, I wonder what he thinks of the Stones’ own catalogue? To me they started get good from 1965, and peaked in 71, and by mid 70s had ‘sold out’ in my view and I lost interest. Rather similar pattern to the Beatles, except the latter split up at the peak of their creativity (or arguably just after), rather than go on forever…

they morphed into psychedelic/prog, not pop, and in general I Ihave never liked pop, but prog rock is my favourite style

That’s a really good point and I’d never considered it before.
After The Beatles broke up I felt like there was a gaping hole in the music available, not just because of the loss of the greatest band that has ever existed (still true to this day IMHO), but I wasn’t aware of anything that could match their high musical standards. I liked a lot of the stuff in the charts in the 70’s but none of it seemed to go where I either expected or hoped. I would often hear a piece of music and find myself picking at it endlessly, imagining ways it could be ‘improved’. None of it ever really satisfied like The Beatles output had done.

That gap was finally bridged when I went to a Yes concert at the Rainbow with a colleague from work. It was a real eye/ear opener. Now that you’ve pointed it out, I can recognise that there seems to be a natural progression to Yes’ output from some of the Mop Tops’ later music. Good catch!

Yes, same with Sgt Pepper. George Martin said it was his biggest error not putting SF and PL on the album as originally planned.