Hi guys! I have a problem when listening to Mu-so in multiroom. I have 3, a QB and two “normal”, all second generation. While listening in multiroom I lose the audio for a fraction of a second on one of the three (random). Can you help me? It’s annoying.

Are you using them in wifi? If so, you may find it’s at the limits of your network’s wifi capability.

Yes, in Wi-Fi
Can you explain?

All wifi devices are sharing the bandwidth that the wifi access point can make available. Depending on wifi setup details, distance, and environment, which always fluctuates, the sum of all three connections receiving music data may be too much. The seemingly random, intermittent losses might point in this direction.

Can you tell us more about your wifi setup?

What do you mean, what exactly should I check on the Wi-Fi?

On the administration web page of your wifi access point (possibly same as your internet router):

A possible test:
If you multi-room only to two instead of three, do the dropouts still happen?

I’m using both, 2.4 GHz and 5 GHz.
I live in an apartment about 70 mq, not a big building with many wifi.
The average weekly speed is Download 78 Mb/s and Upload 30 Mb/s.
Automatic best channel search.
About the unit in network, I have the list but I can’t find the details about using 2.4 or 5 GHz network. 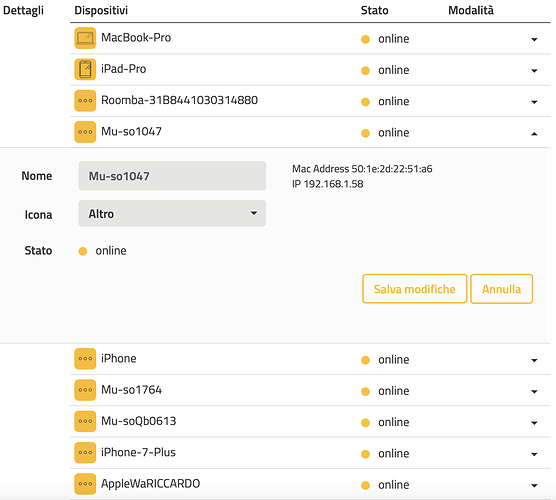 This is the detail about wifi near me (I think …

Try running a cable from the router to each muso. If the problem goes away, you’ll know that the wifi is the problem.

Cool. It does not look too bad, but also not so perfect that wifi issues would be totally unlikely. It is possible to reliably cover 70 qm with one wifi access point, but it is large enough to have the potential for coverage problems. It depends on details - I have 90 qm and the wifi AP in the living room. In one adjacent room, I always have good coverage. In another room, same distance and same kind of wall (drywall), I have occasional dropouts.

The channel situation is looking reasonable (assuming that the list is not much longer than the screenshot shows), with only you on channels 11 and 36.

I would guess that the link speed information is behind the small black arrows in the modalità column.

Given the situation, it is possible that you may have to make an improvement to the wifi (adding a mesh node), but I agree with HH: Before spending money on this, run a cheap ethernet cable temporarily to each Mu-So, then you will know