I am wondering who shares their home animals, what are the pros and cons of mixing hi fi and furry critters?

Do your cats sleep on your warm power amps?

Has your dog chewed up expensive leads?

Has your cat decided that the tone arm would make a good toy to bat around?

How they react to the music you play, if at all?

One of my cats, now sadly departed, never took much notice of music being played, the exception was that whenever I played the first Gang of Four album, he would stomp out of the room looking disgruntled and a friend reported his cat did the same.

How they react to the music you play, if at all?

My dog, a collie of sorts, takes no notice of my music. He’s an intelligent lad and has a prize listening position on the sofa (when not trying out new accommodation). 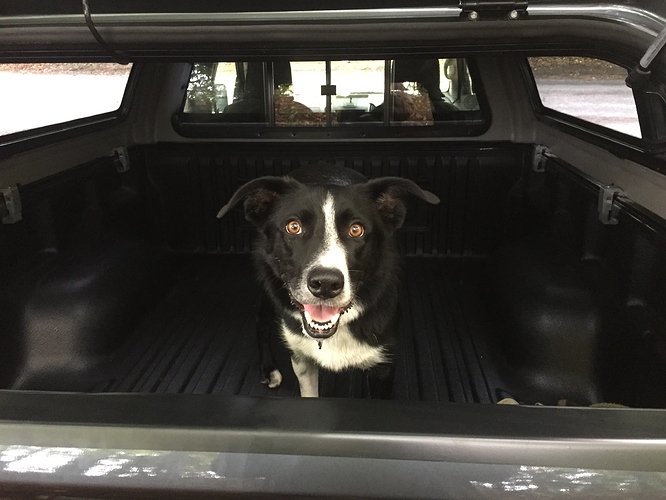 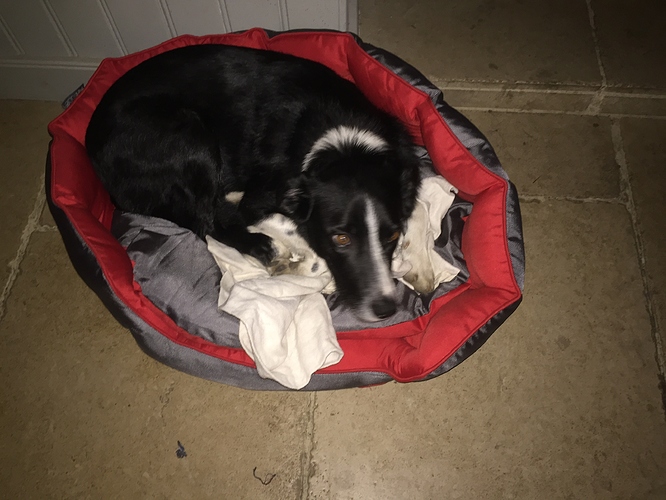 My cat is my companion when listening to music. She has a special taste. When I listen Bruckner, she stays. When I switch to Mahler of Tchaikovsky, she’s quickly gone. The first seconds of Tchaikovsky 6 will make her go away instantly.

I think she likes Bruckner since Bruckner builds up the cresendos nicely where Tchaikovsky and Mahler like heftier differences in dynamics.

Or, she could be a devote Catholic - St Fransiscus will agree surely. 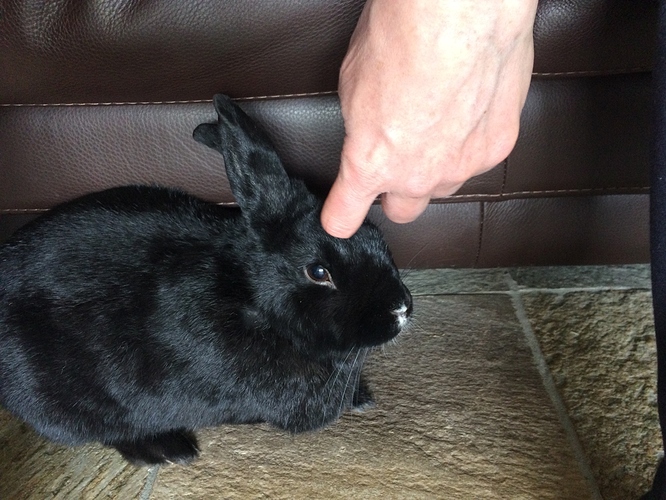 945E97F9-0D6D-4FB7-A25B-06F53ECFE540.jpeg2048×1536 780 KB
My daughter has a house bunny, when you take your eyes off him…he will have a chew sometimes. I was sweeping the floor when he got behind the AV stand so i prodded him out with the pointed end of the broom. Lucky i was holding the plastic head end…big purple spark, he had chewed a cable. Trips kicked in on the power circuit, bunny and me scared but unharmed…i then realised the handle was made of aluminium…close one.
He is about 4 years old, spends a lot of time sitting under my feet being stroked while i listen to the Muso in the back room during the day. Even with the Muso played loud, his hearing is amazing. He can hear a Banana being peeled anywhere in the house, even with music playing. He literally goes banana,s till he gets a piece of his favourite good.

He is not allowed in the front room with the Hifi, though if the door is ajar…he will try and sneek in.

Alf is my listening companion when the other half isn’t about. He wasn’t originally allowed on the furniture but at nearly 12 he’s now welcome. If I sit down for a listen then I soon get a familiar stare and soft growls until I get his blanket and up he comes. He quite likes Cara Dillon, probably due to his Irish roots… 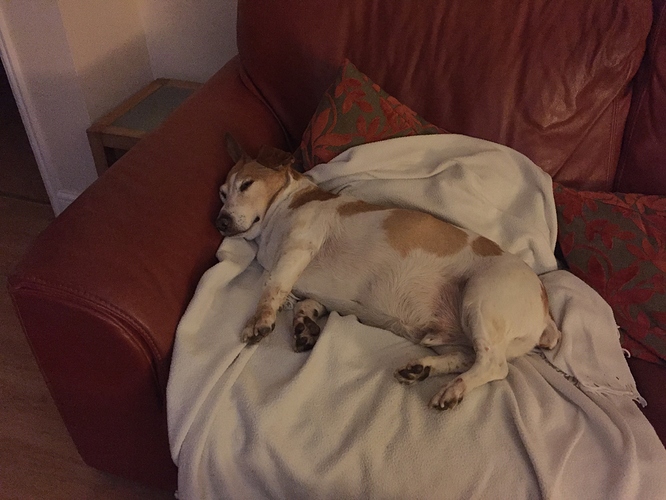 If I’m listening to music in the evening then my Jack, Louby-lou normally likes to cuddle up and listen too. Her only musical preference seems to be that I not get up too often to change sides and that I keep massaging her neck and ears in the meantime…

My chap has always been welcome, and strikes a similar pose … late at night he will complain if I put on another album when it’s clearly time for bed

We have two Welsh Terriers and they both sit on my lap when I listen to music.
Lily is particularly fond of classic jazz 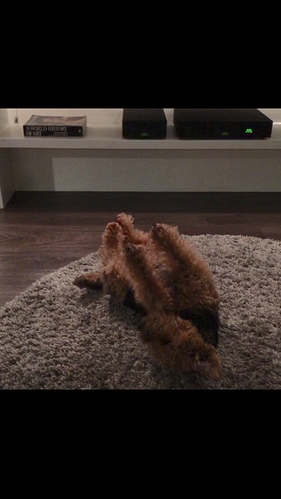 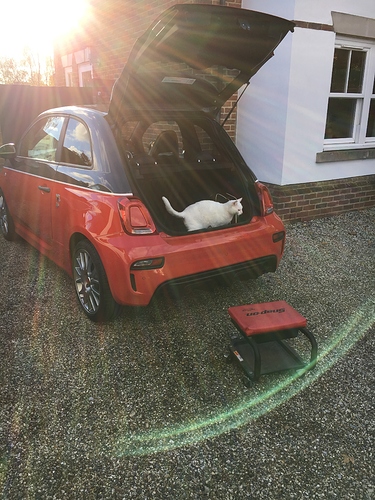 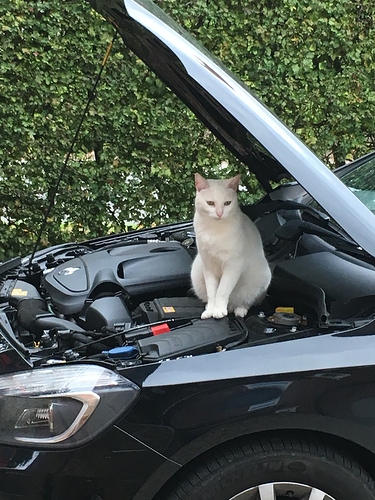 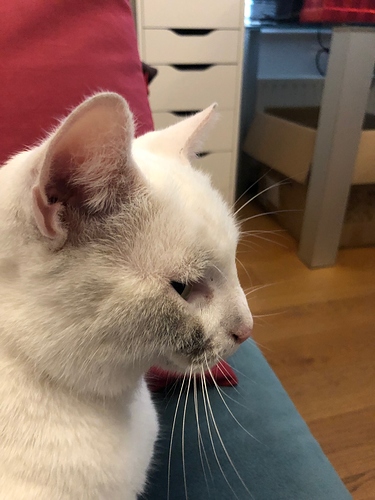 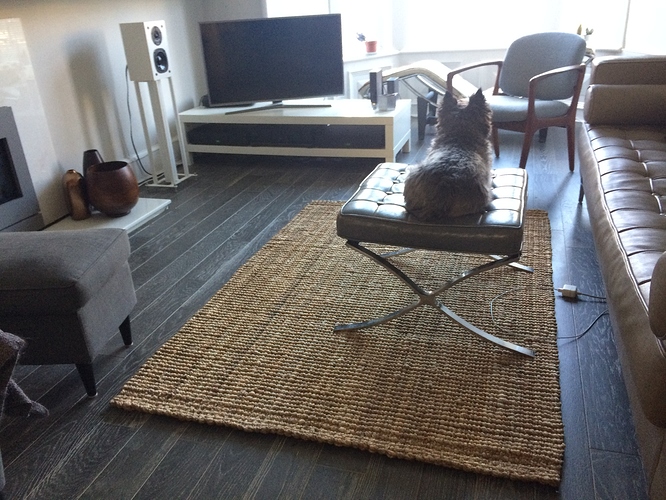 Our woofer’s 12 now. No interest in the hi-fi. He refuses to engage in manly conversation about placement, sound-stage etc.

I’ve tried, really I have. 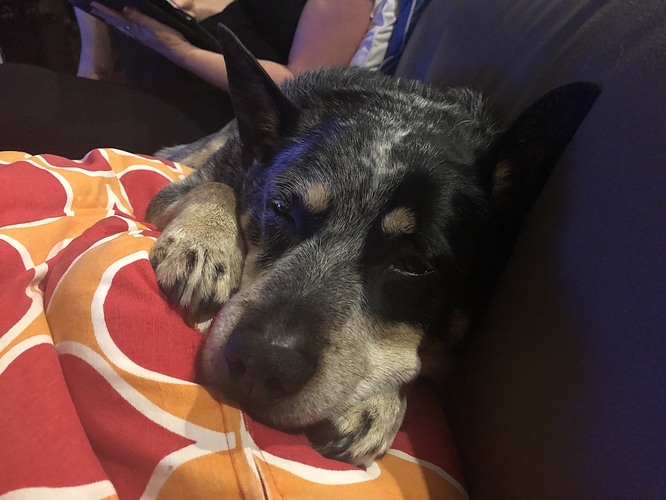 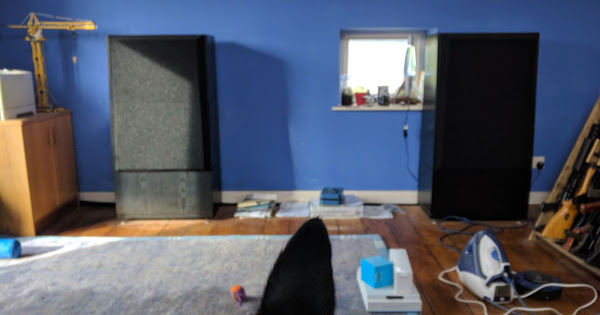 Zhukov, curled up on my lap, with one ear tuned into some Beethoven.

My Avatar which is shown larger here shows Millie, one of our Maine Coons, surveying the surroundings from the top of one of my speakers. She knew perfectly well that she is not allowed to do that!
Best
David 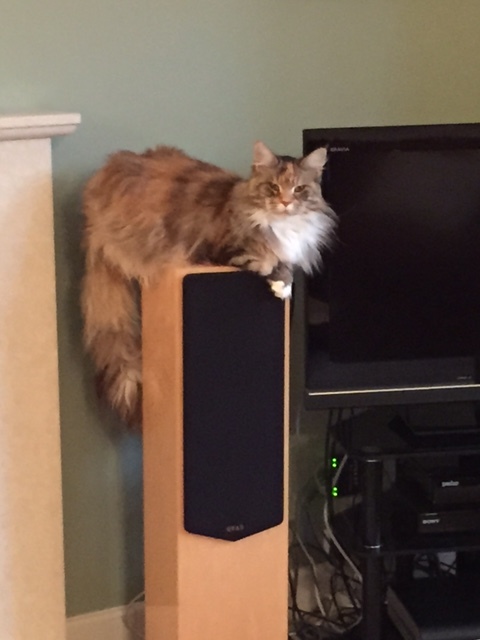 Is it true they love water? I saw a program where a family had an autistic child that loved water. They tried all sorts of animal therapy, dogs, rabbits, horses and cats to connect with the child to no avail. Then a friend introduced them to a Maine coon, and it transformed their lives for the better. Lovely video of the family on Youtube with the cat in the bath tub, and then on a canal boat with the child and cat watching the watergo by…

She knew perfectly well that she is not allowed to do that!

And precisely why she does it; it gets her humans excited & give her the attention she deserves.
Our old moggie, long passed on the same day as ‘9/11’ as it happens aged 19, would walk around & behind anything to knock it over & as soon as we reacted she would bolt out to the kitchen waiting to show us the food bowl.
She loved music, would sit up from sleeping on her prime position on the settee to watch the speakers with some music. Favourite was a bird song CD (we are both birders) & that required to sit on the floor between the speakers to guess which one would have the bird in next. It was fun to watch her with DSOTM, on the 1st track she would pay attention & then leave the room long before the clocks went off, after which she would saunter back & onto the settee or maybe a preferred human lap.

They do indeed, although some more than others. We had one, sadly gone now, who sat on the slopey end of the bath looking at the grandchildren therein one day and then slid front paws first gently down to join them in the water. It wasn’t very deep of course, but came up to his tummy all the same. The kids thought it was great!

And we have to use water bowls intended for large dogs otherwise we find that one or other cat just upends a normal cat bowl.

Wonderful, my sort of cat

Here is Millie again, on my lap, but not really paying attention to the music! 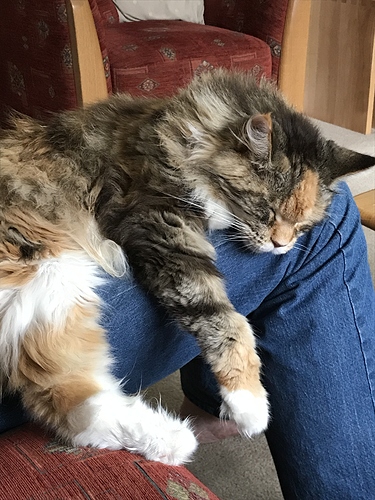 We have a rescue cat, called Betty. Thankfully, she tends to ignore the hi-fi, apart from recently developing a liking for rubbing her cheek against the speakers. She’s not much of a music fan and, if Kate Bush Is played on the system, she makes a sharp exit. 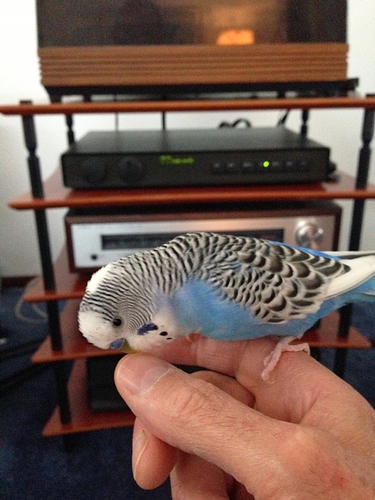