Music Questions No One Ever Asks

Title says it all. Is it because the subjects are strictly taboo? Or is it just because no one is remotely interested in the answers?

Do the major recording artists listen to the music of others for fun in their own time & not just to keep an ear on the opposition?

If they do, do they listen on a decent Hi Fi or don’t they care as long as it makes a noise?

I’ve never seen anything written about it so:-

The kazoo on ‘Unplugged’ does not count for Eric!

I think its safe to assume that recording artists, major or otherwise, listen to other music. Some are well known for exploring some very varied genres - Robert Plant, for instance.

As to playing other instruments, there are the multi-instrumentalists, who who can play almost anything - and there are those who only play 2 or 3 - Paul McCartney say.

As to EC or EJ, not aware that they play anything other than their normal choices…

I suspect that the answers are as many and varied as the artists are.

“I think its safe to assume that recording artists, major or otherwise, listen to other music. Some are well known for exploring some very varied genres - Robert Plant, for instance.”

I suppose what I am asking is -

After a hard day in the studio does our millionaire rock star come home, put his/her feet up & play another artists album for pleasure only?

If so, do they play it on their Statement (or equivalent system) or the £200 music centre from Currys on the basis that if it makes a noise it’s OK? Are the majority of them interested in good quality sound or is that left to the studio engineers?

I take the point re. Robert Plant but this implies a lot of listening for ideas for work purposes & not simply pleasure for its’ own sake.

I ask this because as a (now retired) insurance broker the last thing I wanted to do was to sit down & read about insurance in my own time. I have been told several times that I should never buy a motor mechanics second hand car, as no matter how good they are as a mechanic, their own car receives little care & attention as they have had enough working on others vehicle all day long & can’t be bothered to do more than the minimum needed to keep theirs on the road.

The EC & EJ question is just something I have often thought about as it seems the majority of other big stars do play other instruments, if not to record with, but to compose on.

We all know what football teams EC & EJ follow so why has no journalist ever asked them what else do they play? If you are interviewing two of the all time most famous performers on the planet it would seem a more logical question to me than one about football.

Neither of my original questions are intended to be earth shattering, just pure idle curiosity.

After a hard day in the studio does our millionaire rock star come home, put his/her feet up & play another artists album for pleasure only?

I have friends in the music business, although not millionaires, after a day in the studio when back at home listening to different music including classical was certainly not unusual.
In my experience professional musicians tend to appreciate many genres and styles and appreciate the musicianship…
Kind of the same in many professions… both creative and otherwise…

Elton John has regularly played guitar in concert, and has a massive record collection to boot. So at least he is a yes on both questions.

Sometimes records come out that suggest a deeper interest in music, such as Steve Morse’s “Major Impacts”, Duran Duran’s “Thank You” and Metallica’s “Garage Inc.”. While they can certainly be seen as professional influences, there is no doubt that they reflect on personal tastes. I absolutely love cover albums, as they often are so infused with love of the material, that it often (but not always) comes out ten-fold compared to the originals.

In my experience, professional musicians are not necessarily audiophiles. They do appreciate listening to music in their free time like everyone else, but are perhaps more interested in songs, melodies, structures etc rather than the reproduction (sound quality) itself.

Musician does not equal producer or studio engineer after all!

I can imagine why as a retired insurance broker you never read about insurance. It’s hard to imagine anything more tedious. I’m a qualified accountant but immediately I retired from work I became a retired member of the institute and stopped the journals and emails. I never want to hear about accounting standards again. But being a musician is not like doing a boring job like insurance or accountancy.

Of course musicians listen to other music for enjoyment, just like artists enjoy others’ art, or authors read other authors’ books. Why wouldn’t they? They love music, that’s why they do it. I meet loads of professional musicians and we often talk about the music they like and the music I like. Some have flash systems, some just have Spotify on their phones. While a relatively small number of musicians are wealthy, the majority are far from it, and probably have less to spend on hifi than most on here.

I have seen Elton live on three occasions at huge concerts at The NEC (or whatever it is called now) in Birmingham & he never left his piano.

Are we talking about the same Elton John?

I have honestly never heard any reference to him playing guitar at any point in his career & would have thought the guitar magazine I have subscribed to for the past 30 years would have covered it at some point.

I would have said that accountancy is the one thing more boring than insurance but I guess we will have to differ here!

Perhaps what I was trying to say was ‘do musicians treat what they do as simply a job just as accountancy/insurance etc. & get bored with it just as we do?’

I have no musician friends/acquaintances & therefore appreciate & accept the comments in your second paragraph.

This is where my post retirement ‘job’ comes in. We promote concerts locally so I get to meet the musicians and go to the pub with them and chat about music and all sorts. One example is Ric Sanders who plays electric fiddle with Fairport. We were in the pub and chatting about this and that and it turns out we share a love of both Anouar Brahem, the Algerian oud player, and the Sex Pistols. They are all hugely supportive of other musicians and take a real interest in others’ work.

When we restart our concerts in October I’ll try to remember to ask a few of them what they listen to music on at home. 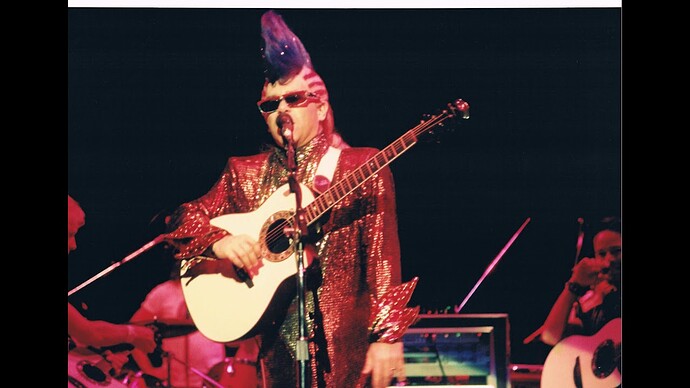 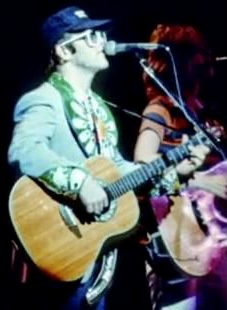 He must be very talented as he is playing the guitar both left-handed and right-handed.

I think the photo is flipped as the guitarist next to him is playing left handed as well, or it could just be that he is a genius

Just been to specsavers and the pictures look fine now.

Not in these photos. What are you talking about?

As someone who owns a record label and has spent a lot of time in famous musician’s homes I can tell you that when someone has made multi millions they tend to have a very high quality music system and do listen to music a lot, though rarely their own

I too have thought about what musicians listen to and the quality of their systems and do they listen to their own material in their leisure time.

If you saw the photos of Elt before the OP swapped them around - in one pic Elton was playing the guitar right-handed and in the other left-handed.

Perhaps they were transparencies that were reversed as in both photos there is someone else also holding a guitar the same way as Elton, so as it would be incredibly unlikely that the other person just happened to be holding their guitar backwards at the same time Elton was, then one must conclude that it didn’t happen.

The 2nd Elton photo was originally showing both guitarists playing left handed which was incorrect as both Elton and the other guitarist are both right handed. This was caused by the original photo being flipped. @AndyP made his comment before I flipped the photo to the correct orientation so that both guitarists were playing right handed. I did make a comment that this had been done in the post after @AndyP’s