Just had the email about the release of the 2nd Gen Muso.

So is this the future of Naim - consumer lifestyle vs traditional stereo audiophile?
It would certainly have made my HiFi journey a lot more inexpensive, even with what seems a rather overpriced wifi speaker, if I’d just bought a few muso’s around the house

My grumpy old age says this is just consumer lifecycle and PR but then again I do quite enjoy just speaking to my Sonos and getting music played … oh, Muso doesn’t have a digital assistant … oh and it can’t match a stereo pair … so just what does it do :;

I do think Naim now have two customer bases, the audiophiles and the high-worth lifestylists.

Don’t get me wrong, i really like my Muso (when it works), but come on, even i am struggling to justify the cost, and believe me, i’m not shy about spending money.

Apparently it integrates into Apple Home and Google Home for voice activation. 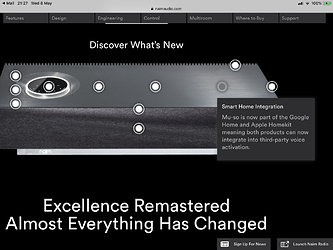 Blimey, people don’t half like moaning. If you don’t want one, don’t bloody buy one.

I was tingling with anticipation (not really) for this?

Whoa, doggie! Still no Class A headphone amp output = No Sale. Even if the price was much reduced.

Consider, instead, BlueSound 2i at $500 plus whatever powered speaker pair tickles your fancy for $1000 or less. The BlueSound has all the PRAT a Naim lover could want, and really smooth, musically accurate output.

I have no idea what the price of the Muso 2 will be here in the States; usually Naim components go for the conversion rate plus 15-25%. So I won’t be upgrading from my original Muso as long as it keeps working.

Still tingling for the maybe mythical 372, however.

Ah, that’s how it works!

Thanks for the tip.

The truth is that consumers generally have moved away from pure hifi and most people don’t regard buying their first hifi as a right of passage before heading to university the way my generation did in 1988.

Naim have been very clever in anticipating and responding to this trend. Getting large numbers of people to part with £1000 plus for a very clever lifestyle product is a good development, sespecially when some of those people will get hooked on proper hifi.

It’s just naim responding to the market and is essential to their survival so that the cognoscenti like us can keep buying our separates.

Son has a QB and it’s impressive and hopefully a gateway drug. I read the email for the new Muso and I found the use of utterly meaningless numbers to be depressing and deceitful. Marketing fluff. I’ve no problem with the existence of the product and price is just a function of willing seller and willing buyer so again I don’t see the issue. However, the approach to selling it suggests Naim are a very different beast nowadays. They’d remain huge positives but the kind of stuff touted in that email, if it came from anyone else, I would mark as spam and unsubscribe.

Having said that (non-cynical version) I have no doubt that the Mu-so 2 is a high quality product, which will give a great deal of pleasure to many people (as the Atom has done for me), and it could be the gateway drug into classic sales in the future (as it probably will be for me)…

But if I were an ‘investor’ taking over Naim, I would not be interested in the development/profitability of the higher end equipment, it would all be about Mu-so and Atom sales. It may be that former is needed to elevate the status of the latter, but I suspect the profits are in the latter.

But as has already been said here, this is good for the long term future of the company and the higher end equipment - if they weren’t making a profit, they wouldn’t be making hifi for much longer either.

As for the marketing strategy for the Mu-so 2 launch, I don’t think it was aimed at long term Classic series owners, it was a great wheeze to get the business talking about the new and enhanced (more expensive) kit. We (some of us) whipped ourselves up into a frenzy as we let our dreams and wishes take over… Thought the ‘This changes everything…’ line was a bit misleading.

All good fun, no one died

Yes, I was disappointed also. I had even auditioned a MuSo last year for a casual additional listening system. I thought it was overpriced for what it was, although the sale in December was tempting. I thought the wireless Kef LS50’s or even the LSX’s were a far better product solution to Sonos’s wireless hegemony.

Not sure what I was expecting. The entire campaign smacked a bit too much of an Apple revea and overwrought hype. And maybe that is the best comparison. As Apple found its mainstream mojo, they left behind all of its power users. Only occasionally do they throw a bone to the faithful who let them survive in the first place.

So while Naim still has a high end product line, will they wish to continue to do so if they need to expand production hours to keep up with the mass products? Or will they slowly let it drift away?

Regardless of what protestations the company might make, once they have walked down this path, they may find that keeing up with volume sales first distracts them and then becomes their primary focus. In other words, they may no longer be in control of their own destiny.

price is just a function of willing seller and willing buyer

Only to a relatively small extent. It’s mostly the cumulative cost of human labour at all the stages of production including r&d and of course a profit margin.

I’m quite happy to see an improved muso

Looks like they have dropped the price of the current model, so that has a knock on effect on used prices for anyone wishing to sell their gen 1.

Will this one be repairable?

Yes, naim replied to me earlier in the thread

I was mildly interested in the Muso 1, either as a music source in the kitchen, or as a soundbar that would have other uses though its weight might limit ready moving between the two. When I heard one I thought its sound was pretty good for a boombox (which in my view is what it is, certainly not hifi). But the price was double what I felt I would pay for such uses.

The new one claims to fix the wifi weakness, which has to be good given people’s queries on the forum. Also apparently improved in other ways that should improve the sound, though how evident to the listener would only be apparent on hearing, and now with HDMI aiding the soundbar application. But the steep increase in cost, rather than at the same cost, might challenge its acceptability - certainly it doesn’t tempt me.

…And they didn’t remove the dust/crumb catchment ring that gives it instant negative WAF.

No doubt it will have a cleaning mode like the original muso/Qb, if one really wants to dust it!

Oh? What do they do, use the channel as a bass port to blow out any dust?!

No, Paul Stephenson has not really retired. Naim have cloned him, and shrunk him to just 3cm high. When you say to Alexa, ‘Paul, clean my Muso’ she makes him jump out of a little hatch with his broom and he sweeps up the dust.