I played it all last night and it sounded great. I went to play a new record today and no love, no left channel.

I swapped the Burndys to rule them out, I swapped the power connections between the headunit and PS to rule the 300PS DR out. And to rule out the 252, I connected my Atom: the 252 tape out to the Atom analog in, and the Atom connected to the speakers. Both channels work, but it sounds pretty flat. The Atom is nowhere near up to the task of powering a pair of Dynaudio Confidence C2 Platinum (and 250DR just barely hangs on).

I have an old Arcam Alpha 9 amp. Might hook that up to the Atom to give the speakers a bit more grunt.

Double check the two 4 PIN DIN > XLR style cables that connect your pre-amp to your amp. These cables can’t be swapped one channel to the other, but one of the XLR’s might have been pushed out of the rear of the NAP 300 by some sort of audio gremlin. The Burndy’s between the 300 and the 300 PS are much less likely to become unseated since they lock into place.

I have checked all the cables. In fact, I’m using WH Morgana DIN/XLR and I swapped the OEM Naim ones back in. I also swapped the PSU Burndies between PSU channels to rule out those cables, and I reversed the connections from the head unit to the PSU to rule out a dead PSU channel as well. It’s the amp. My dealer is going to lend me a 200 this weekend to confirm, but I am 90% certain the headunit LC is dead.

Meanwhile, the old Arcam Alpha P9 amp died as soon as I hooked it up. Typcial POS Arcam reliability. I don’t think I ever owned an Arcam that didn’t fail sooner or later.

Sorry to hear this JDP, time to put a few extra miles on the bike then.

Yes, indeed, a good excuse to prioritize my focus on cycling.

Will be interesting to see what I get first, my fixed 300DR or my new custom bike frame.

It’s not even two years old yet.

My 300DR bought 10 months ago did exactly the same thing… barely audible and extremely distorted on the left channel and then it started heating up… badly. I disconnected everything including the XLR inputs and it made no difference and the fan kept spinning and the front faceplate very warm to the touch. Sent it back to my dealer who got the same result straight out of the box - fan on and very unhappy. It went back to Naim HQ and they reported it in fine, perfect order! The very helpful dealer ran it for a few days and it behaved so sent it back to me. Now, an ex-dem 552 that I recently managed to secure has had to go back because of a major channel imbalance at low volume - new ALPS pot fitted and it’s too on the way back. Hope the 300DR works, because there’s nothing worse than a major fault that the official engineers cannot reproduce!

Yikes! So so sorry to hear this @JosquinDesPrez

It’s not the 300DR after all. I borrowed a 250DR from my dealer and still have the same issue. No left channel.

So now it is something with the 252. I have two Supercaps and swapped them, so I have ruled that out. I also ruled out the DIN/XLR cables. As I mentioned in the original post I took the tape-out from the 252 into my Atom and that works, so it seems that 252 tape-out works, but pre-out does not, so it’s either the 252 or the signal part of the Burndy that is faulty.

Any thoughts @Richard.Dane? (and maybe change the thread title? Ugh)

Could be stuck relay? I’m not sure though how that may or may not affect the record output. Perhaps if @NeilS is around he could give his opinion on what it could be.

Thank you. I look forward to Neil’s thoughts if/when he has a moment.

When you swapped the Supercaps did you undo the Burndy at the NAC252 end as well? Just wondering whether it may be worth checking that.

Yes, I have disconnected and reconnected the Burndy, and the SNAIC too.

I may just try a full system rebuild this weekend and see what happens.

With all the trouble shooting you’ve done, it does sound output muting relay related, especially as the tape output is working fine. Hopefully a quick fix.

I had this exact same problem about 5 weeks ago with my 1 year old 252/300/SCDR …… took all 4 boxes to my dealer and they managed to recreate the problem. Tracked it down to the 252/SCDR and not the 300. Sent the 252/SCDR back to Salisbury and they had it on test for 2 weeks and couldn’t find anything wrong. I have now had it back for about 3 weeks and all is well. So I heard the problem, my dealer heard the problem but Naim didn’t.
I’ll just keep my fingers crossed that it was something unexplainable and hope my £20k investment is safe🤞
But my problem was exactly the same as you describe. Good luck.

Maybe I’ll recreate the old “I’m sorry I didn’t catch your Naim” trick and see if that clears the plumbing. LOL

What price a knackered wooden floor if you’ve got music (on both channels!) 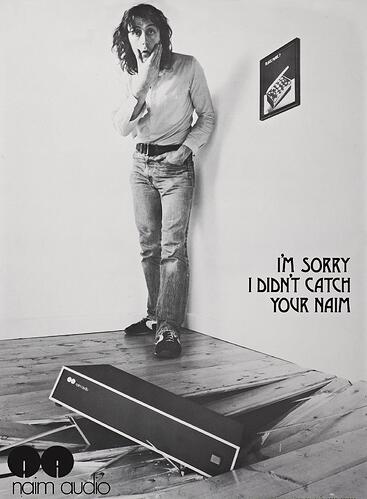 Mute relay is crap on Naim. Must be the majority of claims. Had a new SN3 that never got out of mute on one channel. I never mute Naim after this.