Just took delivery of my new pride and joy a TEAC A-650 tape deck a 13kg behemoth
built like a Challenger tank sound wise no Nak Dragon but does for me couple of quirks but hey its 1970s ! slowly getting the hang of recording and playback oh and sitting in my lounger sipping my favourite Alcase wine while watching the dancing VU meters…! 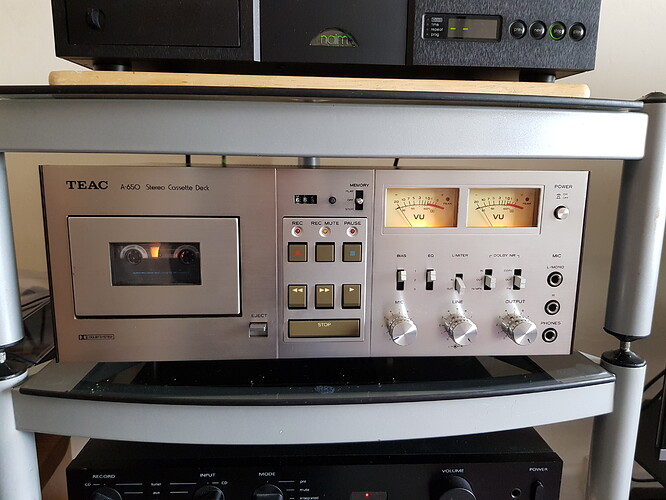 That should read Alsace wine ooops!!

When we’re all long gone that will still be standing, VU meters doing their thing, awesome

It’s a question of time until @Richard.Dane say something on the matter.
He’s got a weak on tapes…

And congrats. I love literally anything with VU’s.

A very nice looking deck Jaksthelad. It looks to be in mint condition!

It is sadly after a few recordings its given up the ghost! bought as an E bay purchase
from a guy who had it serviced by the legend that is Tim Jarman hopefully its nothing too terminal as its a looker!! Thinking if only Nakamichi did VU meters…

Oh no! So sorry to hear that. Hopefully it’s something that can be easily fixed.

As for Nakamichi and VU meters (OK, peak, but still needles), here’s a recently serviced 582… 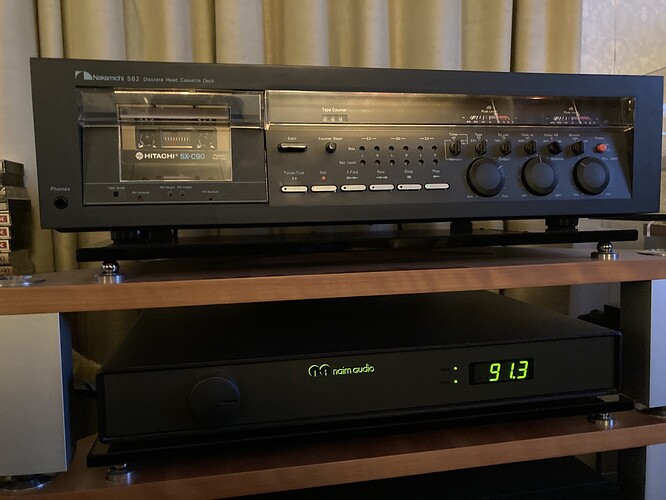 Wow VU meters and Nak do go together! had two Naks in my hi fi life (Dragon.CR7)
foolishly sold them both on (well money was too tight to mention) would love another one but looking at Nak_Central’s 3k plus prices forget about! it speaking of whom are they kosher? they are an Eastern European outfit as i can see.
On the subject of the Teac my neighbours 17 yr old had a look he hadnt even seen a cassette! does all his listening via iphone,tablet and laptop but after a listen to Dire Straits ‘You and Your Friend’ he was gob smacked!

There’s a guy local to me who has a shark nose BMW 635 CSi with Nak tape head. He makes up his tapes on his Dragon.

What are your favorite Alsatian wines? I am a member of the Confrérie Saint-Etienne (the Alsatian wine fraternity) and have visited several wineries there. I particularly like their grand cru Gewurztraminers and Rieslings.

It’s a lovely deck. Do you still use it?

Mine used to belong to forum member David Hendon who had owned it from new. It was in lovely cosmetic condition and David had obviously looked after it very well, however, it hadn’t been used in many years and required a full mechanism strip-down and service as well as changing out the capacitors. At the same time it had some upgrades done to the audio circuits. It’s now working perfectly and sounds as good as, if not even better than my old ZX-9.

I don’t use it much, but keep it around to play old tapes occasionally. Every Nak clinic I took it to, the engineer told me that it had an unusually fine set of record electronics.

Yes a recent Ebay purchase needed a replacement belt work was carried out by Hi News vintage guru Tim Jarman all for the price of a decent bottle of wine still plays up with the fast forward/reverse but its 41 years old !

Got today to find my cat Tigger asleep on the still warm Teac! had another checkover from Tim Jarman(top guy!) still playing up sadly but all is forgiven looking at those VU meters! 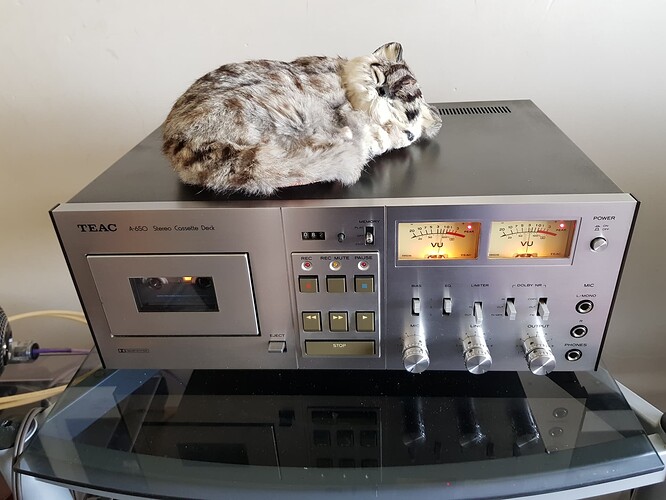 However, if it is a real cat, can I give you a word of warning? DON’T let the cat sleep on the TEAC.

Why? Well, I used to work in a TV repair shop about 40 years ago and on one occasion had to repair a video recorder, one of the monster Sanyo Betamax ones. No colour on the picture, the customer said.

I was given the job, much to the sniggers of the rest of the service team. Luckily, that sort of problem could be traced by following the signal until the culprit was found. It was only when I found the fault (corroded pins on an inductor and its screening can, plus a patch of strange tacky coating on the pcb), and had cleaned the strange substance off the pcb and replaced the offending inductor that they told me what the joke was. The VCR belonged to a doctor whose cat slept on top of the VCR and was in the habit of peeing on it. The house didn’t smell too good either, I was told.

So, apart from the damage to the innards of your TEAC and the chances of overheating and shortening the life of components because the cooling vents are blocked by kitty, your cat may be at risk of electrocution.

You have been warned!

but wasn’t it Sony that had the beta max system. It was a development from the u-matic professional recording system. It was unfortunately taken over sales wise by JVC and their VHS which was inferior to the betamax system. The only reason VHS became a market leader was video cassette rental. This was a clever marketing ploy by jvc (Japan’s victor company).