Sanyo’s version of Betmax was Betacord.

And here’s on of my very first ‘Toys’ a 1977 Aiwa ‘Cassceiver’ a compact cassette deck/amp/tuner it gave out an underwhelming 25 watts a channel put me on the road to better(and more expensive) things starting with a Sansui amp/cassette deck which had an open front with just a plastic cover for the tape heads my next deck was a Nak Dragon(!) 950GBP from Unilet Hi Fi wasnt in the best condition and could not afford to have it serviced ended its days falling out of a loft onto a concrete floor!
Have had another Dragon plus a CR7(the best sounding Nak ever?) was an all Naim user up until recently but after having my F serial number Audiolab 8000a serviced
have gone back to the future! 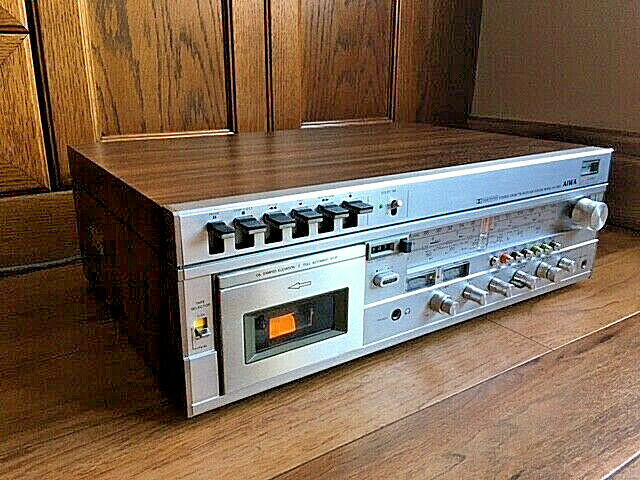 Yes, you are right. Sony developed the Betamax system and even followed it up with Betamax hifi sound using an extra pair of heads on the rotating head drum to give a much better sound quality. A friend of mine had one of these, but by the time I bought my first video recorder, Betamax was all but dead so I got a VHS-hifi recorder instead.

Whilst Sony developed the Betamax system, other makes were available, including Sanyo. Their monster machines were very good but the cheapest one was rubbish, in fact one of the worst on the market.

You are right that the VCR market was won on the back of the video rental market and the VHS camp’s decision to subsidise blank tapes to get the system off the ground and kill the opposition.

The non-hifi Betamax system gave superior picture quality to the VHS system and better sound quality, although this was from a linear soundtrack and not fantastic. The video-head based hifi sound on both systems was a real improvement on the linear.

The VHS victory showed that technological superiority is not always going to win. the demise of Betamax was due to slick marketing and a preparedness to undercut the opposition until they bled to death.

This was mirrored by the Sky vs BSB satellite TV war of the late 1980’s when Sky went for the quick fix of using the PAL system while BSB had a technologically superior system, complete with widescreen options and digital sound.

Sky and BSB were running each other into the ground until they “merged”. At that point, Sky’s team took over. Both transmission quality and programming were reduced to the lowest common denominator. Sky developed a monopoly and hiked prices through the roof and were able to buy out rights to sports that no longer appear on mainstream TV.

Thanks Donniboi for very informative reply really appreciate it and enjoyed reading it. A wealth of information and knowledge Sir