My very 1st topic on this forum, I hope this may be of interest.

My Dad was in the RAF for a few years after the 2nd World War, and has this photograph which was taken in April 1951. He still talks about the people he met and the time they spent together.

After Mum passed from cancer in 1996 he moved back to Bath where he was born, and this picture was discovered in a sorry state. It had been rolled up - the result of which was several large cracks in the printed surface. Obviously he wasn’t happy about it at all, particularly as (bad) luck would have it some of the damage went through/close to his own portrait.

So having used Photoshop for many years, I put my skills to the test, to make a repair, and believe me this was the hardest thing I have ever retouched. It was scanned at 600 dpi, with the actual finished image at 300 dpi, and 11,224 x 3500 pixels in size (the final print has a white area at the bottom with his squadron insignia/details). These images here are both reduced in size/detail here for upload.

Apart from the image ‘surgery’ I needed to do to repair the damage, there were masses of dirt and artefacts to clean up. It took a lot of patience, and numerous long sessions, but I got there in the end.

The picture was professionally printed and I framed it in time for delivery on Fathers Day. Of course, he was very happy to see it again as he remembered it, and all my time and effort was rewarded.

Have you done anything like this, that you were determined to repair?

I did scan some old photos of my Mother’s and Grandparents some years back. some of the photos were badly damaged or faded to the point where you could hardly make out an image. One such was a photo of my Great Grandfather who farmed around Winterbourne Kingston in Dorset. One day a bomber crew had to make a forced landing in one his fields. He had his picture taken with the crew and the bomber. Sadly, it had faded almost to nothing, but with a lot of photoshop manipulation I managed to get some kind of an image. One of the crew though looks almost ghost-like… 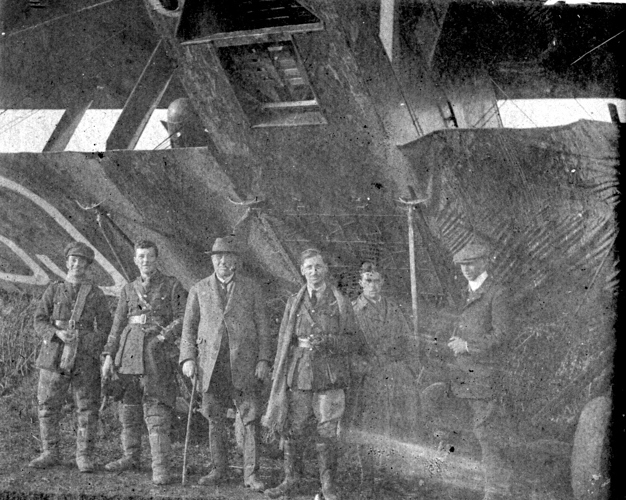 Thank you Richard, it looks like I was more fortunate with the quality of my original than you were. However, your picture is still a good reminder of the events that day.

Sometimes, just removing the dirt in a picture can help. I did a lot of trial and error for my repair. I had to duplicate uniform parts and merge them in, and where faces were damaged I made a copy and flipped it to make it whole if possible. Indeed, there are some ‘trouser twins’ in the image!

Excellent job Geoff. Difficult one to judge whether to repair legs or replace them. I always try and repair, even if the end result doesn’t look as perfect, as I like to see the original legs. Great work.

Thank you @Count.d, I think that I just got to a point where I needed to complete it after so many hours, and Father’s Day was approaching. I told myself that it was the faces that mattered more than anything.

My Dad was in the RAF for a few years after the 2nd World War, and has this photograph which was taken in April 1951. He still talks about the people he met and the time they spent together.

My Dad has a few black&white photos of the same theme and era.
He attended National Service at RAF Bridgnorth, in 1951

He’s definitely not on your photo, was a scrawny raw recruit in 51

@Debs Thank you for the response, that is interesting. My Dad was at Padgate, and 18 when the picture was taken. Here is the graphic that I remade to go with the photograph, he is just left of middle 3rd row back - sporting a suntan!

I wasn’t taking anything away from your work Geoff. Brilliant job and a lot of effort.

I admire your patience Geoff. I have a similar photo from my old grammar school circa 1973. Like yours, it was rolled up without a protective tube and has the same vertical cracks. I’ve spent many hours on it and need to spend many more. I often wonder what it would cost to be professionally restored, given the man hours spent on it.

Nice work Geoff, which handsome lad is your father?

@Aren Thank you. He is just left of middle 3rd row back and sporting a suntan, so his face is noticeably darker.

I am visiting Dad this morning to check his care is being carried out properly, spend some time with him (with distance/safely procedures), and I have shown him this thread.

It has put a big smile on his face, so thank you for the interest, comments and the likes.