Started my Naim journey with a Supernait 3. I am converted. Came across a NAP 250 DR and am currently using to preamp from the Supernait thru the 250 into Graham LS 5/9. I want to go with separates and plan to sell the SN. Question is for the money I can get an olive NAC 52 / SC for the price of a 282. Anyone using the olive gear with the 250 DR. How does the 282 compare with the 52.

You’ll need a Hicap (or Supercap) for the 282 so budget for this.

If the 52/SC are newly serviced they will out-perform the 282 but if not, a full service isn’t cheap and you might be better off going for the more modern amp. Bear in mind that the newer DR technology isn’t an upgrade option for the Olive kit (although you could use a black series DR Supercap with a 52).

A pre-loved 282 with Supercap DR would be ideal…

Source is important too.

I want to go with separates and plan to sell the SN. Question is for the money I can get an olive NAC 52 / SC for the price of a 282. Anyone using the olive gear with the 250 DR.

I wouldn’t, though this is so personal, and at the risk of possibly offending friends here who have happily gone this route - mix olive with the black boxes as they are visually not matched. Everything in “Naim sound” is systemised by rung and hierarchy. That premise in their upgrade path hasn’t changed over 5 decades.

When we start mixing things up, some combos just don’t work as well, even though they are all Naim. Other combos have become “Naim classics” and few would argue against established fact through years of exploration, careful listening and feedback from most quarters. You will pay quite a price for going the “round-about” route if you mixed and matched without abandon, and eventually come back to the table in acknowledgement that certain combos just sing to hell and back better when paired while others leave some to be desired.

Speak to your Naim dealer to help you with a good combo for your 250DR. Find that balance that works for you, with his knowledge and experience.

The key for me is in getting the pre-power balance right. Deviating usually means a certain “detriment” to the paired sonics - and a whole lot more outlay and some frustration along the way when things just don’t “sound so right”.

I’m quite purist in my approach to Naim system matching but others may not be.

Anyone using the olive gear with the 250 DR.

A black box 250DR with the 52/SC could and would work, apart from the mixed aesthetics, hardly a visual match. It’s akin to mixing “old school” Naim sound - which still resonates with me deeply and is great - with the present day sound when they were never quite meant to be voiced together. Yet Naim did remarkable work ensuring that previous and present could complement one another in the overall scheme of things, an amazing feat. Just gotta try the combos carefully and see what works for your ears if you’re headed that way.

The 52 olive you’re interested in sounds best when matched to a 250 olive or its made-in-heaven pairing with the venerable 135s. It’s an organic sound, with lovely coherence when set-up right, very full-sounding, with exciting pace, rhythm and drive, but just not quite as refined, open or micro-detailed as the present “middle weight” classics or reference 500 black boxes. Many olive owners still swear by their systems over the new, and don’t mind the “trade offs” if you will, of a little less refinement and outright micro detail, for what they presently love about their systems. Their feet are still happily tapping as I type this and they don’t see the need to move on anywhere, being content. All that matters! We also have owners in the black box camp swearing their allegiance as well… So, again, it’s personal taste and preference but still all Naim.

I had heard a 52 with the 500 [non-DR] centuries ago and it was yet better than the olive monos for sure with the brute that a 500 is, but after a fairly short time, the looks started to wear in on my eyes and mind, and my friend who owned them, couldn’t accept the pairing even though they sounded great together. It was “visual disarray” and I understood his sentiments. He only really started smiling, when he brought the 552 home. I asked him, “So, what’s the diff but I guess you’re happy?”

“The 552 blows everything out of the water, I feel it lets my 500 stretch and show what it can really do.”

In this vein, the 552DR should ideally and logically be paired with the 500DR as they were voiced together as a reference amp system. A 252DR with a 300DR. Balance is key.

Each of us has different priorities and acceptances.

The last thing I will share to help you in your thoughts is that the preamp in any Naim system is actually the most important component for me in my experience. After three decades in hindsight, the pre actually sets the tone and directs the system’s sonics as a priority, regardless of source. The pre is the brain and nerve centre of a Naim [any] system and controls everything. No one emphasised enough then about this outright significance of a pre-amplifier with me when I first started and I can’t stress this enough to Naim friends keen on optimising their sonics.

So I’m afraid you’ve gotten it “the other way round” with the power amp first - a good challenge to have nevertheless, but it means you now have to get a “good enough” pre amp that can help open up the sound for you that was voiced optimally with the black box 250DR.

Best to save up and get the best pre you can afford without compromising on originally-designed voicing. If you went the gradual upgrade path, it’s alot of money over the years. Saves you more in the long run to get the very best pre you can, then source [the source-first rule isn’t really in full agreement for me - a can of worms ha ha], followed by the power amp if absolute sonics were what you are after.

There are other factors we won’t get into here, apart from the balance in components themselves we should first sort.

I have an Olive DR’d Supercap with a 252. Pre-owned, they were cheaper than the 282 route I was planning (and I had a Hicap DR at the time too).

I have always had a mixed olive, chrome bumper and black box system. And to me it sounds fantastic. Box disarray? Nah. It looks amazing. It’s all set on Full Fraim. No different from having different makes of boxes.

If you want all Naim black boxes then go for it. I would go for 52/SC any day over a 282. Will sound much better. Get Darran at Class A to service them then you are sorted for 10 years. They are equivalent of 252 with Supercap 2. And to be honest they may sound better. The 52 was the ultimate preamp and was paired with the 500 at production as recommendation before the 552 came out.

And if you’re getting it as a bargain go for it. The 52s have great resale values as well!

And I would certainly consider going 52 with 500 in the future.

The look of the boxes matching!

Both the 52 and the SC were serviced at Naim Canada last year w/ pots 8 upgrade along with the MC phono (na523 k). Thanks for you feedback!

I run a 52/500DR love the combo. 300 not so much. 300Dr yes, 500DR close to perfection. Using Vivid Giya 3’s. I have no interest in another black box. The 52 was a statement piece and was concurrent with the 500 with which it was a recommend pairing. If Naim equipment is so colored, I don’t think we would all be enjoying it so much. The SN3 didn’t come close to my 52/300dr setup, when my 300 was out getting DR’d, the SN3 was in the main room. I’ve been upgrading my vinyl rig over time and the 52 shows through every slight change in cabling, VTF, mat, weight, ring etc. Not only can you hear the differences, but they are easy to verbalize. Which is no small feat.

I’ve regretted purchase in the past, like when I went Olive 250 to a 300. The 52 like my Ypsilon VPS100 was an immediate affirmation of everything I hoped it would be. I’m a pretty skeptical dude after 20 years in the ER. So with upgrades I usually hear different presentations, not necessarily “better” ones. The 52 makes everything better, beat every pre or integrated I’ve tried. 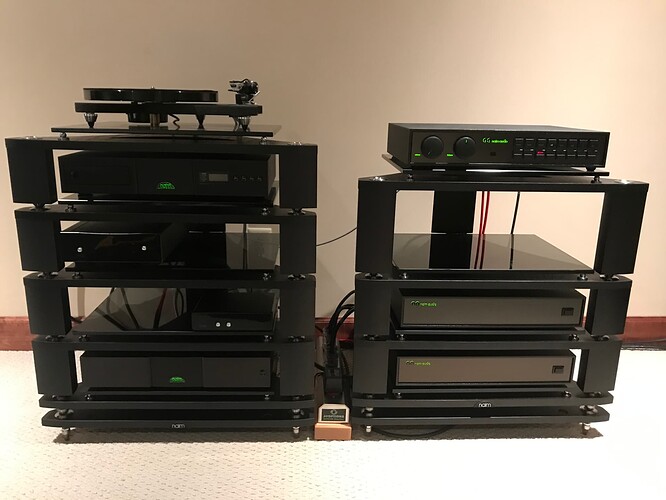 One option regarding mixing Black Boxes and Olive is to separate stacks. I quite like the look of my 52 with SC below and 250 below that. CDX2.2 and XPS-DR on the left. You could certainly do the same with 52/SC and black boxes off to a side.

I’ve a single rack, so just gone with the best stacking order: 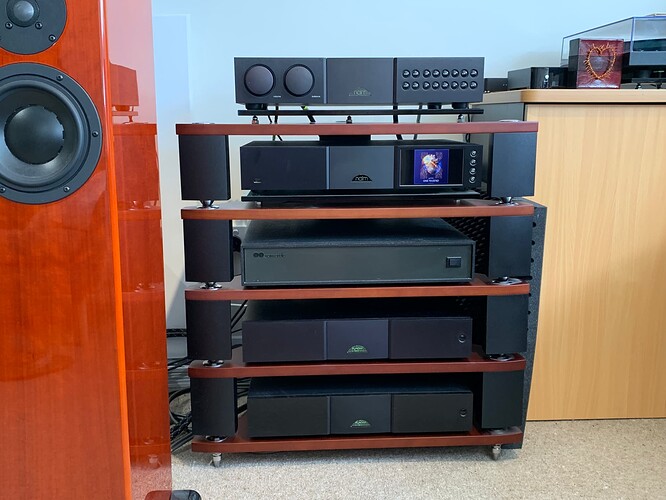 I ran a 52/Supercap into a non DR’d 500 for a while. My dealer loaned me a 252 and I thought it was a side-ways move with some sonic values that I liked and some that I didn’t. Moving to a 552 was the only way to significantly improve on my good old 52.

My repair man and Naim advisor(CW), told me the 52 to 252 is at best a lateral move. 552 or 52 and frankly he said its “just different flavors”, no supremacy. An amazing analog preamp is an amazing analog preamp. Not a complicated circuit. With service and replacement of worn items with the best specced resistors and caps, and well a serviced power supply. Placement on top notch vibration reducing platform(the 552’s edge) and clean power(again 552’s design edge) the difference per dollar is frankly crap. I’ve craved upgrades on all my amps up to the 500Dr, and all my sources before the VPS100, never really craved an upgraded pre. Though the 52 does suck at low levels with channel balance and it is very high gain. Yet it dead silent, so use the gain and input low level sources for the best sound.

I had a SN2 before the 252/250 and I also have a Nova. The SN2 was a nice step up from the Nova, but the 252/250 is a significant improvement over the SN2. No reason to expect anything other than the 52/SC/250 DR being significantly better than the SN3. The only question may be the desirability, or not, of mixing DR and no-DR (my dealer always recommended against mixing these).

I can’t afford the 552, so I’ll happily settle with the 252 and I’ve only ever seen one used 52 on the market here in New Zealand anyway…

My eyes, my eyes!! I think it looks awesome, I don’t get it either. My eyes are closed listening most of the time anyway. It’s moot, though I do admit I spent 200 quid on a ring clamp holder, because I hated having a plastic mat on top of my streamer to put my ring clamp when I switched sides or changed records. I also hope to replace my silver TT PS with a black one. That’s definitely my favorite colored Fraim. I wasn’t sure if I would stay Naim forever, so given the heavy investment, I went with a tried and true rack, scientifically designed by a man who worked for the US NSA to help silence the vibrations from Nuclear subs, innumerable patents. The rack seen in my profile. SRA scuttle.