Just made my way back to Naim. I have to say there really isn’t a house sound out there that I prefer more from amplification than that of Naim Audio.

I hope to post my detailed impressions regarding my journey away from Naim pretty soon, but for the time being can anybody chime in on any experience they may have had between these 2 power supplies. I’ve searched the forums but I haven’t found a definitive answer.

Was the SUPERCAP olive only changed to accommodate other Naim components?

Does the 52PS actually sound better than Olive SUPERCAP? Obviously providing that they are both in good health.

Also if anybody could show a picture of the internals of the original NAC 52PS that would help.

AFAIK, the 52PS had to be changed to bring it in line with certain regs (CDPS too). Naim also felt that a single transformer with suitable windings could outperform the separate transformers. The use with other components was happy coincidence ,and indeed had the 52PS been so socketed, it could have been used on others too - look out for some in-house specials modified by the service dept. for powering staff Prefixes. I had one and it was very good - pretty close to a Supercap which eventually replaced it on my Prefix.

I see, so the Nac 52 PS had 2 transformers. Did it have more capacitance than the eventual olive Supercap?

So I’ve managed to find internal pictures of a 52PS. It has 4 large caps but only one toroidal transformer. Surely 4 large caps can keep more power in reserve. Wouldn’t this be more beneficial in a power supply. The SUPERCAP that replaced it has 2 large and 2 small. Please can somebody explain.

I’ve no idea of the technical details, but I have owned both a 52/52PS and a 52/supercap - not at the same time, but not very far apart in time and used with most of the same kit in the rest of the system. My impression at the time was that the 52/PS was the more enjoyable of the two and there was something special about it which the 52/scap did not quite have.

The 52PS has 2 transformers - the small one, for the digital supply, is (I think) underneath the small circuit board to the right of the large (analogue supply) transformer? 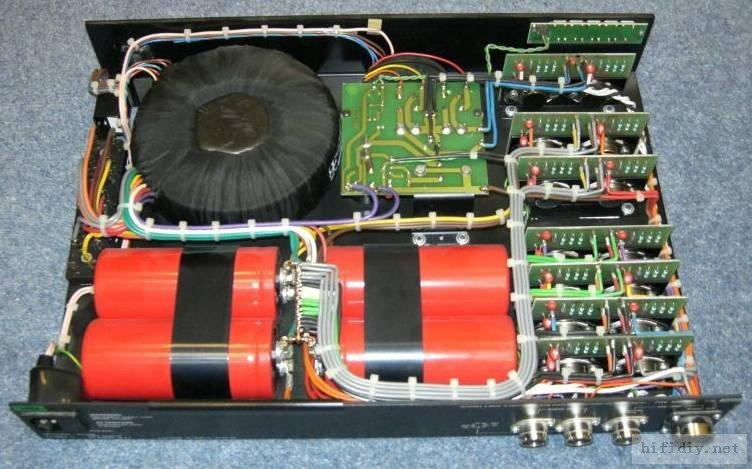 That’s quite an impressive Looking PSU

Ah I see. That looks very impressive. I’m struggling to understand why Naim opted for less caps capacity on the SUPERCAP? Can there be an improvement by doing this? Perhaps the SUPERCAP taps into the power quicker?

Don’t be swayed by size and number of caps. Different types can perform the same function in smaller sizes. If you look at caps from the 50s compared to ones with identical ratings today you see that in 70 years a cap with the same rating has gone from the size of a beer can to a thumb.

The total voltage and microfarad rating is what matters, not the size. You may well be correct but without checking the specs, you’ll never kmow from a picture.

bahahaha. Steady on. Bit close to the line there.

…still it was the same generation so I very much doubt the smaller caps have as much energy capacity.

Like Oscpercy said, he much preferred the 52PS to the SUPERCAP and he isn’t the only one that has said that. Makes me wonder why Naim would design a power supply (SUPERCAP) for their flagship product of its time that doesn’t perform as well as the power supply it replaces (52PS)

A cynic might suggest that replacing a product that has only one function (powering a 52), with one that can be used to power a number of different items, makes good business sense?

A more charitable view would be that it allows an easier upgrade: replace a Hi-Cap with a Sueprcap, using your existing pre, then, as funds allow, replace existing pre with 52 (though that too might be considered good business practice!)

I seem to recall that on the old Naim forum, it was said that the 52PS does have greater reservoir capacitance, as well as being a twin transformer design, and is, of course, dedicated to one task, so perhaps it’s not surprising that some find it preferable to the Sueprcap?

I think it’s too easy to see more caps = “must be better”. It’s never that simple. Certainly the need to move to just the one transformer but with extra windings brought with it a discovery that actually this could bring performance benefits. One or two who might prefer A 52PS over the Supercap does not turn things on its head. Back in the day, the vast majority (including Naim) preferred the Supercap and the proof being that they listened and then voted with their wallets to upgrade.

Well as long as Naim decided it was a step forward in overall performance I can understand that. I had thought it was only done to help it’s compatibility appeal. I guess offering a 52PS and SUPERCAP might have caused confusion. Although that is the case with the current 552ps and SUPERCAP.

I didn’t know that the SUPERCAP has a larger transformer than that on the 52PS so that’s also good to know.

Probably was a step back, but was also probably the only way forward at the time?
Its also a bit ironic that the 552 has its own power supply these days and the supercap is not good enough

Dunc, the NAC552 uses a split rail supply so a Supercap wouldn’t be suitable.

As i said, its ironic that the supercap is not good enough for the 552

Not exactly what Richard was saying.

Does anybody know the weight of the Olive SUPERCAP?