Wonder if anyone have tried this combination of boxes and how the synergy is said to be between olive and classic boxes, specifically NAC52 + SC + NAP300DR.

I have done a 82, SUPERCAP and NAP 300. The speakers were Harbeth shl5 plus on something solid stands.

I really enjoyed this system. Obviously the 82 isn’t quite as engaging, clean or as visceral as the 52 but it was a lot of fun. Out of my Naim systems it was probably my third favourite behind the 552/135 & 52/135

Well never heard but can’t imagine that it would be anything but great. Before my SC I ran my 282 with a non DR HC, and was great.

Now that I’m thinking about it I think it will be a real gem of a system. The 52 is rapid fast and oh so much fun. And from what I hear the 300 DR is a marked improvement over the 300.

What speakers will you be using?

Currently using Tannoy Legacy Eaton but might take a move on those next year so not letting them decide the front end. From what I read about 252 it is exactly what I’m looking for but not sure how close a 252 is to a 52 in terms of sound signature. I read some prefer the 82 and 52 more than 282 and 252.

I am one of those. 252 isn’t to my taste. It was a kinda luscious tube sound for me with obliviously more slam and leading edge. But the 52 and 82 even though they are leaner sounding are more exciting and engaging. That boogie factor is there in spades. Plus you have the 300dr which will bring enough heft to the sound- not to say the 52/82 don’t provide heft. Just not as much as the 252

I’m actually being an idiot and imposing right now. Lol what is it that makes you feel you will like the 252? I hope my sound description is a little informative. IMHO any Naim amp is a good buy. Believe me the alternatives just don’t do ANYTHING for me

I remember reading a review of the NAC252, on its release, which compared it with its predecessor, the NAC52 (the preamp that I have had and loved for over 30 years now).

My take on that review at the time was that the 52 was complex and time-consuming to build, whereas the manufacture of the 252 was much simpler.

I inferred (perhaps incorrectly, perhaps not) that this meant that the 252 was not necessarily an improvement on its predecessor, and I have never considered switching my allegiance from the 52 to its successor. (I wish that I had kept that comparative review, but it’s long gone now.)

I have never heard a 252 to this day, although I did hear the NAC552/NAP500 at a launch event many years ago at Grahams Hifi attended by Paul Stephenson. They were very special amps, but I have no desire to trade ‘up’.

I shall be sticking with my 52, although it’s long overdue a service, so will be sent back to Salisbury soon. It will be fascinating to hear what differences I perceive in its sound when it gets back. 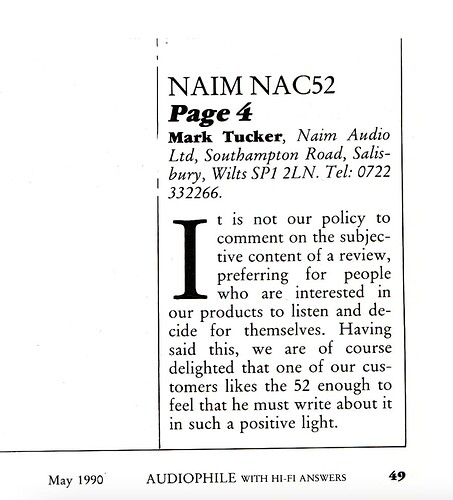 I used to have this combo - very good indeed

@Premmyboy and @TimOopNorth How would you describe the sound coming from such a system and what you like/liked about it?

It’s very difficult to answer that. From my point of view I went from Nac152xs to Nac52/Supercap.
The difference was quite amazing. A clearer more detailed view on the world in comparison with the Nac15xS. I guess hardly surprising given the price differential.
The Nap300 did not appear to be a massive improvement over the Nap155XS at the time.
However I have since changed speakers twice and the Nap300 driving my Neat MF7s is wonderful.
I don’t intend to go any further in terms of amplification. As far as I am concerned I have hit a sweet spot in terms of sound and cost.
Of course others may have a different opinion.

Imho…It is fantastic, though these things are dependent on room, system and taste of course.

I find a 282 to be much less good than a 52, and less engaging (if more detailed and tight) than my old 82. The 252 is imho much more vigorous and involving than a 282, but it is more ‘different’ than ‘better’ than a 52. The combination of delicacy, speed and boogie from a 52 is infectious.

The 300DR is to me significantly better than my old 250 in every area, including foot-tapping boogie and other areas where the 250 excelled, and areas where it never did (stereo image, control of bass, quiet background). That vigour also means that imho the 300DR is considerably more dynamic and involving than the non-DR version of the 300 or any 250.

For anyone with speakers like my B&W 804 D3 (and who is not about to buy a 500), the 300DR is likely to be the best power amp to go with a 52 to me because the improvements in neutrality, control of bass and punch that a 300DR brings (with no loss of boogie) compared to lesser amps are exactly the things that a 52 needs.

At the very least, this is a combo to hear in your house, with your speakers and at the volume you prefer (300DR is noticeably brilliant when quiet too). You may well find it more appealing than 52/SC/135s or 252/SCDR/300DR.

The only way I could reasonably change mine now would be to swap the olive SC either for the original 52 PS (if I could ever find one) or a newer SCDR. I have seen all options recommended…

In terms of olive/classic synergy, I think 52/SC/300DR is a real winner. To hear that same synergy issue working much less well, try putting olive 250 or 135s with a 282 - can it really be both a bit dull and a bit harsh?

I have thought a lot in the past about potentially moving from Olive to Classic. I think mainly due to cosmetic considerations as I actually prefer the the more modern look to the Olive. However, the conclusions I have come to over the years is that moving from a 52 to a 252 would be more of a sideways move even taking into account the difference in sound. Looking at them from an engineering point of view, the simple fact that the 52 consists of a separate board for each channel is enough to keep me in that camp. The 300 again is a compelling proposition, more so than the 252 but again, I can’t quite get there. The reality is that if I were 17 again and in funds, a 252/300 would be a no brainer but I have history and the 52/135 is and always will be my end game. The eye of a Sauron is now firmly fixed on my digital source which currently being NDX could very easily become NDX/XPS with an NDS end game. But I digress……

I was on the 52/SC/300 for a while and really liked it. Trying with a borrowed 300DR I think there was was more difference than cooperstion. May be I didnt give it enough time.

In the end I serviced the 135s and I dont know about the hifi-aspect of 52 + 135s but it sure was an awesome combo listening to music.

Having spent a lot of money over the past few years I’ve come to the brutal realisation- When a system clicks, leave it the f**k alone. Yes there may be improvements with new gear but more importantly your system may become unbalanced or worse. There is another point. I think users become comfortable with a particular sound and unless you’re bored of it, deviating from that sound you’re comfortable with will also be unsatisfactory.

My absolute best was the 552DR and 135s which I’ve now reverted to after a big hole in my bank account. I don’t think I’ll every change now.

The 300 replaced a 250 olive and fed SBLs (later changed to SL2s). One of things I remember very clearly is how much better the 300 was at lower volumes - very listenable quietly - than the 250. It gave a bigger sound with more scale. I was very happy with it but ended up with active 300dr into the SL2s (552 by this time) and now have 552/500 into 808s. But I think the 52/300 was a rather lovely sweet spot and it would be far from the end of the world had I to move back to that level of amplification

I’m curious, what role did Mark Tucker have at Naim? That name rings a bell.