NAC552 ordered…but what to expect?

Apart from the absolute level that might necessitate in some systems/rooms that the volume pot is in the critical range, there is also the separate challenge that small volume changes on the remote can cause large differences in volume, making it a bit difficult to reach the volume that is exactly right.

There are two tricks on the remote for this that are mentioned in the manual, and maybe you know this already, but many people don’t (including me until a kind soul pointed it out to me). So here it is, in case it helps: 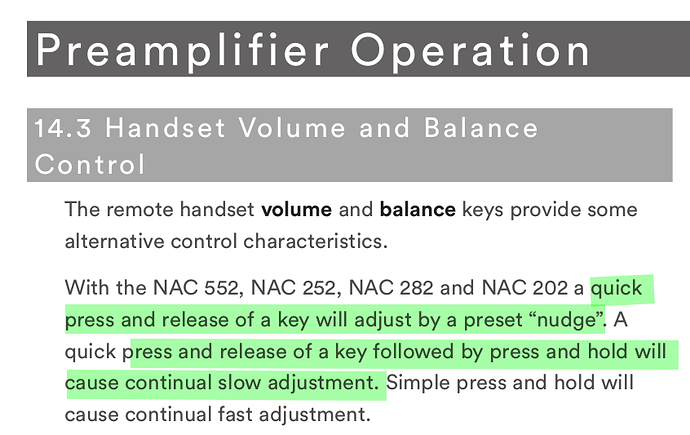 Thanks @Suedkiez . I agree! This great feature is what makes the limited usable volume between 7 and 9 o’clock feasible.

That was my exact thought ! Currently experiencing my second relay failure on a less than two year old unit. On the same channel as well. Very frustrating.

…except such a failure twice-over would be very unusual and would doubtless be warranted by Naim, so while inconvenient, would cost nothing.

Wow, sorry to hear that. Over my years with Naim I’ve had several failures but at least they’ve always been quickly fixed. Actually the servicing capabilities here in the UK and Naim’s commitment to giving their products the longest possible life is one of the main reasons for choosing Naim. That’s not to say that failures aren’t immensely frustrating, I hope yours get sorted fast @Buryfc

Glib answer is to expect left mono only at v low volumes. There’s a decent chance of that happening.

You can overthink these things. My move from 252 to 552 was done without auditioning, and it didn’t occur to to try to quantify the differences or to write down the pros and cons of the two so that the improvements could be highlighted. The 552 is superb in its own right, from my pov the 252 is now history and not relevant.

So there’s one upgrade already!

Mine had it as well and quite badly as well, but it was fine once I had it serviced and I am sure it was the first sign of my 552 going wrong as just before it went off for the service it had really started to go bad on one channel

I’ve just got a pair of PMC Fact 12’s and the accompanying centre speaker on demo and I can assure you a 4.1 system is definitely not as good as a 5.1 system. By the time I’ve got my 552 back they’ll be long gone and I’ll have to try and rearrange again.

Yes, I appreciate that, and I understand your frustration.

In another thread I described it like this. The 282 is visceral, the 252 mature, the 552 does both and a whole lot more. Enjoy the music!

Incidentally, I’d love to hear a 552 with active ATCs.

So would I! Even with a 282 HICap DR I am surprised at both the quality of the sound and the room filling capabilities. From how you describe the 552, I am in for a treat. I’d describe the ATC sound as visceral, so with added 552 maturity, viscerality should be next level.
HiFi Critic actually reviewed the both the passive and active versions of the SCM50. In passive mode the NAP500 was used. The active version was apparently not quite as good, but considering the active configuration was a huge amount cheaper, maybe provided better value?

Funny the only Hi-Fi product I’ve ever wanted to own for the aesthetics is the 500. Awesome looking beast.

I moved from a 282 to an ex-dem 552DR 6 months ago and it has been a rocky ride. The 282 was used with a regular (but recently serviced) Supercap 2 and had Chord Signature Tuned Array DIN-XLR’s (

) and the renowned forward 282 presentation was simply amazing with the 300DR it was partnered with.

I too had a small windfall and went for the 552DR sound-unheard from a Naim Dealer a coupe of hundred miles away. The sound was definitely better AND worse; for me the interconnects on the 282 were transformative and the Burndy on the 552 appears to have been a big bottle neck once again. As delivered, I appreciated the greater soundstage and detail, but the lack of 282 forwardness drew me into the music less than before, and there was a new and unwanted upper midband harshness. This is likely at odds with everyone else’s experience, but horses for courses at the end of the day, and may simply be related to the lack of synergy my system had before.

I too had a nightmare with the volume pot. My AVID Pellere phono stage can output a pretty decent voltage (practically a match for the CDX2 output) and so my right channel also went practically dead at lower volume which was alarming when it happened. Both my dealer and Naim wanted it back to check and they replaced the volume pot for another - came back to me and seems no different. It was only with the help of this forum and another very helpful technical advisor at Naim that I realise it is just a trait and not a fault.

Would I do it again? Probably; the extra detail, scale and soundstage are pretty addictive but it has come at a fairly significant outlay above the tremendous 282 Supercap combination.

Thanks @mij29 that’s great feedback.
I’ll definitely be investigating Chord cabling, so hopefully that will help. I didn’t have the 282 with a Supercap, and I believe that’s a big jump ahead of the HiCap DR? But you’ve found what I’ve only slowly realised, that more performance doesn’t always mean more emotional engagement. When I moved from 52 to 552 I initially thought that the 552 was always better in every way, but after a year or so, there were certain things I missed about the 52’s presentation sometimes. Maybe this is why musicians have so many instruments? Each has its own sound which is right for certain occasions.
Anyway, thanks again for your experience.

I am a little torn about whether active is better or whether a 500 into passive ATCs would be better.

A number here have moved up to 500DR passive from other choices active. The 500 is a wonderful partner to a 552. My best decision was to ditch 252/300 both DR for recently (at the time some years ago) serviced unDRed 552/500. Once you get on top of the issues such as mains and racking the DR is less important IMO.

@Monkey_Jim could you please share the connection of your 282 and ATCs (which cables and from which outputs on the pre)? Will the cables have to change for the 552? I am considering the active 50s at some point in time, but have not thought about this change practically (currently have SN3->ATC40p). Thanks!

Hi @Zhenya the cables are Chord Sarum T 4 pin DIN to 2 XLR. The connection is not from the preamp but the power supply. The cables will be the same for the 552 and attach to the 552PS. The cables are 1.75m each side and I understand that it’s probably not great to have very long cables driven in this way, as the power supplies were not really designed for this. I think there are other ways to connect, but this is what my dealer recommended for my set up.