hi all,
i’m using a naim 300dr with a meridian 568 and would like to upgrade the preamp. I’d like to take box count into account and only stream using Roon. As the 272 successor is not on the horizon, I’m looking for an alternative. Does anyone have experience with Naim 300 dr combined with a Linn (katalyst) Kdsm or Adsm. If someone has experience with a meridian 818v3 or Ultra Dac, i’m also keen to hear about it.

@bailyhill could respond to you. He uses a Meridian dac and before had Naim gear too ( Nd555).
I don’t remember someone here driving a nam amp with linn source directly. Perhaps @TiberioMagadino knows something about that, he has a linn dsm.

I have used a Linn Klimax Kontrol with NAP200 and it worked well without any obvious problems. I had previously used a NAC282 with SuperCap, but had problems with Linear PS buzz. I swapped out the NAP 200 for Linn KCT before moving to the DSM. The main drivers for the move were Linn’s Urika II for the LP12 and Space Optimisation V2 which made a big difference. This is the best vinyl replay I have heard at home,

I can see no reason why a DSM would not work well directly in to a NAP. I also used my NAP200 with Chord DAVE and it worked well enough. I think the Etude sounds even better and has the extra power I needed to drive inefficient speakers. So all in all the NAP200 was/is an excellent and versatile amplifier.

I know Naim likes its power amplifiers used with its preamplifiers, but in my experience, the NAP 200 works well with alternative front ends. NAC 282, UQ, KK and DAVE.

your reactions are very helpful. Sounds useful to explore these options further. Wonder why there is no thread like: best Roon streamer/ preamp to go with naim poweramp. I would be interested to learn what to take into account - like impedance matching and lots of stuff I didn’t know was relevant.

Hello Ignace—Bailyhill here. Yes I went from an ND555 to the Meridian Ultra Dac. With the ND555 I was using a DC47 Townsend Passive Pre. I went from 3 boxes to 1 box. The ultra is very nice. Its also MQA full decode which is the best to my ears. I have it driving a Krell KSA 80B which Drives my one ohm Apogee Scintillas. No experience with Ultra driving any other amps–but its a great source. I use Nucleus+ and Roon. No vinyl, no NAS, no downloads, but a Unity Core to rip cd’s/

Hi Bailyhill, thnx for sharing. Nice setup! I was wondering when going from 3 boxes to 1 box, were there any real alternatives to the Ultra Dac? And … just out of curiosity, is the MUD on par with the ND555 setup when considering Red Book?
Thnx!

Hello Ignace–I had a Mytek Manhattan II that I tried to dip my feet into MQA. It was very nice and convinced me that I wanted to sell all my gear and go with the ultimate MQA system. I tried MSB and that was good. Then the MUD as you say, and that ticked off all the boxes for me and the sound was better than I was expecting. I had also reasearched dCS and Brinkman–both fine units I am sure. At that time, about 6 months ago, dCS had just started to emerge and the reviews were not out yet. I could not find one locally for eval. I think they are very good units. The fact that several experienced forum members here have migrated to the DAVE, and Linn, suggest that there was more to be had than the ND555 was offering. I would have waited for an outboard box or a firmware update from Naim, but I went directly to the factory support and there was no indication that they were considering it at that time. I am 75 years young, and cannot wait forever. So I pulled the plug on the MUD and its been wonderful. Its the end game for me.

As to RedBook–I use a Unity Core and rip cd’s to it. When I auditioned the MUD, it was clear that their apodizing filter was doing something much to my liking. I mostly look for MQA material these days, as its wonderful. However, I must admit that lately, with some jazz and some country vocals, I am finding some older material at 44/16 that sounds mighty fine. I would guess its the MUD and the apodizing filter as well as other things that they do but do not talk about–and of course the mixing engineers did a great job. Have no regrets. Would do the same thing again.

Recently considered adding an M Scaler, but went for a pair of Vandersteen Subwoofer 3’s instead. It should help both the bottom end and and top end according to what I have read. They are being built now, and should ship soon. Then the fun will begin. I will post on my Subwoofer findings in the future.

Also considered adding another power supply for the ND555, and NAC552, its power supplies—but that was cutting into my Tesla fund and it was exceeding my WAF box limit:smiley:

Hi Bailyhill, good to read the MUD makes you so happy regarding both Redbook and MQA. I also love reading that you have so many years of experience and still enjoy your hobby. Gives me hope I have several more years to enjoy my hobby as well. That makes the MUD sound like an even better investment!

I will be following your experience with the new subwoofers with interest as I am currently considering adding subwoofers to my standmount speakers as well.

Thnx again and enjoy your music.

You give me too much credit for till enjoying my hobby. Actually, in 1984, my attourney says I was the victim of an attempted sqeezeout, which ended my involvement with Apogee. Having designed the Full Ranges and the Scintilla, it was a tough pill to swallow, as both were introduced to critical acclaim. I literally never owned, turned, or listened to a music system for 34 years. I only listened to my car radio, but not really for anything more than background music.

So I move back to Aerospace Engineering for 30 years, and vowed to not spend any time or money on Audio until I could do it without impacting my family. That day came 2 years ago, and I rekindled my interest in a big way. In the mean time, I pursued Astronomy for 34 years at a very high level as a hobby. Now I enjoy both.

I co-founded Apogee and designed the Ribbons because it had been a lifelong ambition to reproduce sound like it was in the room. Back in the day, the Ribbons were very good, but they did not check off that box for me. Now with better source, the MUD and MQA, and a rebuilt Krell Amp, its doing it.

If the MUD is so good, why did you consider adding an mscaler to it?

does the MUD already upsample the digital files?

Christian Punter from Hifi Advice site is a big fan of Apogee speakers. 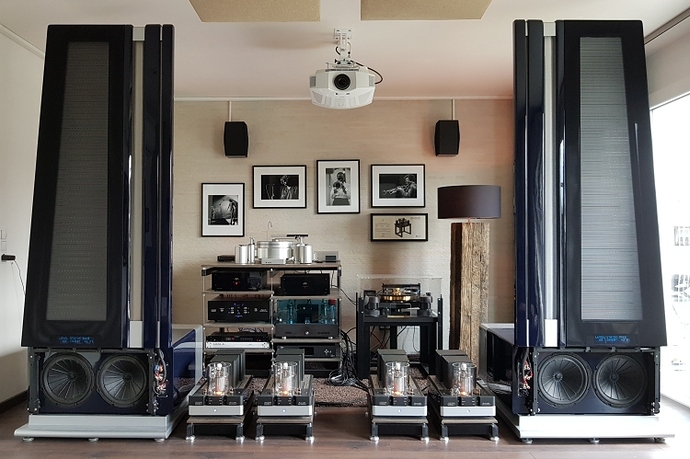 Hello Jim good question–Yes the Meridian Ultra upsamples to 352/384. Of course Mscaler goes to 768. Might be better. With such positive posting here about the Mscaler and Chord Dacs, I was primarily thinking the Mscaler might improve the SQ of my cd’s and downloads. However, I only have about 100 cd’s and about the same downloads. So that means $5000/200 = $25 per for the improvement. I did not spend that on the purchase of the material originally, so seemed like a poor ROI. In addition, I am pretty much 100% streaming now and have not played a cd or download in months.

The other consideration, was that I was looking at getting the Vandersteen Subwoofer 3’s. They would improve the SQ of not only my cd’s, downloads, but most importantly, my MQA material. Opinions may differ on this, but RV claims that with the high pass of the sound to the main amp, eliminating the lower octaves, the MR and TWT will sound better in most systems. He then provides the powered subwoofer with a complementary signal, so the sound of the subs take on the character of the upper amp which eliminates the integration problem we hear about with many subs.

So the Subwoofer was a better deal for me, and it would add the bottom octave or two, as well as improve the top end. It was about $7k for the two subs and HP network. BTW: the HP network is a teflon cap with dc bias so its as transparent as it gets and its 6 db/oct so it does not destroy the time coherency at crossover.

Expect a call anyday from my dealer advising that the Subs are here.

Thanks for explaining your rationale, BH.

I also use 100% Tidal HiFi streaming.

I’m wondering whether to get a posh NAS - but as you point out this would then also require me to invest heavily in buying (hi res) music for it.

Perhaps smarter for the moment to focus on maxing out my streaming system, which already sounds very good.

its 6 db/oct so it does not destroy the time coherency at crossover.

In the case of the Apogee Ribbons, the Midbase(also called Woofer in some systems) driver extends down to 35 Hz where it fall off due to natural resonance. The Model 3 Subwoofer is designed to operate linearly to an octave above crossover. Crossover is set in this case to 80 or 100 Hz. Many installations would try to use the woofer down to 35 Hz or so, and crossover to the Sub at that point. There would be lots of phase issues at the crossover. Richard Vandersteen has done many years of research and listening and devised his approach to use the Sub at a frequency of 80-100 Hz to avoid this problem. His Subwoofer uses 3 drivers instead of 1 driver so that it has the speed and transient response to keep up with the driver above it in the frequency range.

Its a very well thought out approach, and makes the most sense to me. You can get more details from his web page. Just google on Vandersteen–there is lots of info under Subwoofers. His rooms at audio shows always get very high marks, including best in show, so he knows what he is doing. He also makes a complete line of speakers. He believes that speakers should make the input sound like music, and has a very keen ear.