I finally got the opportunity to buy a 552, and like a kid before Christmas I spent all last night setting it up straight after getting off a 10 hour flight. The thing is magical; I have it paired with a 300 DR and an NDX2 with 555PS.

Anyway, it got me wondering purely from an academic point of view. Surely the topology of the preamp can’t be that much different from anything else can it? Presumably it’s a Class A stage with a gain of something around 10-ish, so is it purely the component selection and regulated power supply that make the difference?

There is the rigorous component selection and matching, yes, but also very stringent multiple regulation, and a split rail topology. One of the costliest parts of the NAC552 to implement is the mass loaded sprung suspension system for the circuit boards to reduce microphonic effects; This is where you begin to understand why the mechanical engineering at Naim is just as important as the electronic engineering. To hear what the suspension system does is easy - just listen with it locked up and then listen to it freed; remarkable!

Enjoy the 552DR once warmed up it really comes on song, I too picked up a 552DR a few weeks ago I cannot stop listening its sooooo good.

My observation on the suspension was when I owned my 552DR I found it was not that fussy on support, unlike the 252 which I found more sensitive and very much benefitted from full fat Fraim.

You screw in the transit bolts. It’s not recommended to run it that way - obviously.

Which are the transit bolts? 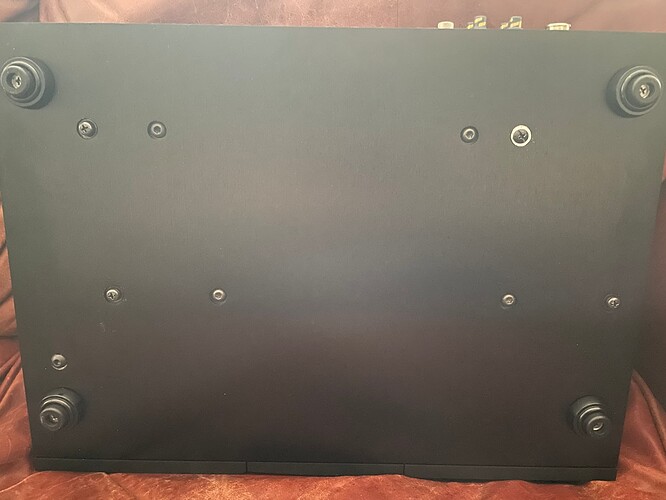 That doesn’t look at all right. The feet for a start look wrong - like someone had screwed in rubber foot inserts into the alloy foot wells. This came from a dealer or private? The transit bolts should be a very specific length and have plastic knurled ends to undo by hand. 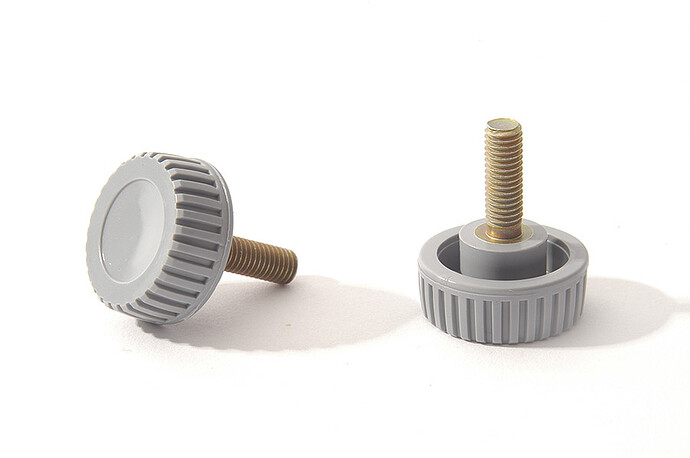 That looks distinctly dodgy. The feet have been changed and goodness knows what’s been done with the bolts. It’s possible that the bolts were lost and others have been substituted. I’ve been trying to find pictures of where the bolts should go but have failed. I suspect it’s where I’ve marked them in the picture. Maybe a 552 owner could take a look. My concern is that if it’s been messed about with there is no guarantee it’s right on the inside. I’d be inclined to get a refund as it’s most certainly not right. 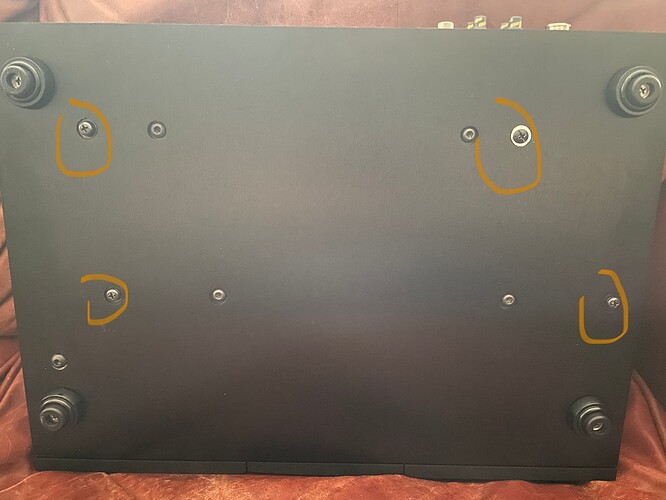 Many thanks! I went back to the dealer and they are taking a look.

Ok, thanks for all your help. The unit is used and the previous owner had lost the bolts, so they simply used equivalent 20mm M5 screws as a replacement. That I don’t mind - the bigger question is what happened to the feet! Anyway, all of this meant that I did in fact get to verify for myself that the system sounds much better without the transit bolts

If I was you I’d be returning that unit to your dealer for a full refund.

(I’d also be changing my dealer)

That unit will have diddely squat resale value with those 2 “modifications”.

How a dealer doesn’t obtain proper replacement bolts and doesn’t fix the feet is unbelievable. They are treating a 552 as if they were selling a walkman at a flea market.

If the price was very good, if I was in the OP’s shoes I might be inclined to keep it and send it to Naim. However, it would have to be considerably below current used prices. Else I would return it as well

If it’s been bodged on the outside, goodness knows what it’s like on the inside. Maybe the ‘dealer’ is someone you meet on a dark corner.

The unit is used and the previous owner had lost the bolts, so they simply used equivalent 20mm M5 screws as a replacement.

So are these threaded in as the transit bolts would be, rather than the chassis actually floating like it should be? I wouldn’t be happy with this uncertainty….

“Lost the bolts” on a $30K piece sounds suspiciously careless, to me, from someone who spent the money. Best case an oligarch who hasn’t time to care, maybe?

Also, do not, under any circumstances, tip the 552 up like you have in the photo (once the transit bolts are removed) otherwise you will damage the suspension. The bolts need to be removed with he head unit level and close to where you want to place it. Then, once done, gingerly carry it to your stand and place it carefully down. You may hear some minor clunks or rattles. This is perfectly normal and is the suspension system working.

Hi Simon - I noted with great interest your system as it is currently and thinking of taking that step, What are your thoughts on the preamp being the heart of the system as you often posted previously.

I recently had the chance to compared 282/HCDR to a 552DR with a Chord Dave, and the the 552 outperformed the 282 massively (but then it really should given the price tag) and really had me amazed at just how much difference upgrading 282 to 552 preamp makes even with a top source like Chord Dave.

I wish I had never heard this comparison now. The 282 was not fully warmed up for a whole week but still the 552DR is absolutely a phenomenal preamp.

Am waiting to see what the dealer says about the feet.