Not only playlists, but also some albums, have many tracks.
Sometimes you want to hear a track at the end of the album.
But above track number 215 the Naim app refuses to start the track.

I already asked support for a solution, but I wondered if other people experience the same problem
See the example in the picture below. 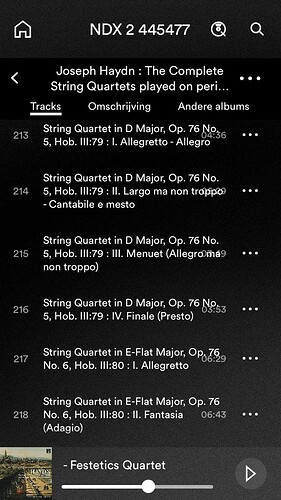 Yes, that is a known software issue - @tomvamos and team are on the case…

I am aware that there’s a limit of 500 tracks in the Naim app playlist. Maybe the app is considering one album as a track, so the 215 tracks can be in reality 500 tracks ?

Is this a cd set ripped to a server? Which server?

Because it may be possible to re-do the metadata and break this up into multiple albums rather than as one looooooong album.