Hello all. The NAIM streamer app no longer shows all content (albums, artists etc) in a list which I was used to and highly prefer over the folder view. I used to be able to change the view but that feature seems to have disappeared. I deleted and re-installed the app twice now but after a few days I wonder what is going on. Anyone facing this? Any ideas what is the reason I cannot change the view? Thanks in advance for your response. Best, Pieter

Pull the screen down and you should be able to see the icon to change the view.

Some info here on views including the images for @pcd suggestion above.

Is there any way to make the album art and font larger on the NAIM app? Android btw. I went through all the settings screens and couldn’t find anything and setting the basic Android to use larger icon and font didn’t seem to change the way the NAIM app presents things. Just got a 10 inch tablet to use for control… well as a means to ease myself and SWMBO into the idea of stabbing at a screen rather than pushing a button. However the issue is I need glasses to read the text. So one option is to…

On the other hand I’d hate to be forced to have a larger font!

The only way for that to be acceptable for me would be to be able to put in an image file to act as an icon for the artist.

It should be configurable really. Then it would suit all.

I can read it just fine if I pick my control pad up to normal reading distance but it’s difficult to peer through my varifocals to read the track name when playing music.

I also know that Greg and the team are already having too much difficulty keeping the UI relatively stable despite the vagaries of Android and iOS screens, let alone throwing another variable into the mix!

The big problem is that these Naim and most similar DLNA control points don’t present icons to represent the classifications at the higher levels of the hierarchy (e.g. Artist, Album Artist, Genre etc.); I believe that it’s a limitation of the DLNA protocol.

Could you please explain what you mean in the second paragraph? I see an album cover for each artist. Are you thinking of something different?

I believe that the standard DLNA protocol doesn’t provide a standard way of returning an icon for a specified artist (or genre etc).

However some DLNA servers have implemented their own mechanism to use the DLNA protocol that allows the server to send different icons (e.g, a folder or folder in folder icon) at each intermediary layer of the hierarchy using this in a different way to send a different icon for each item in the list. I don’t know the precise details (access to the DLNA protocol costs a LOT of money), but this is what seems to be the case from my research into this - equally I can’t be certain that this is the exact reason why many DLNA servers don’t supply artist icons.

So you’re saying that the fact that I see album art at genre level is due to something that the Asset people have done. Is that right? 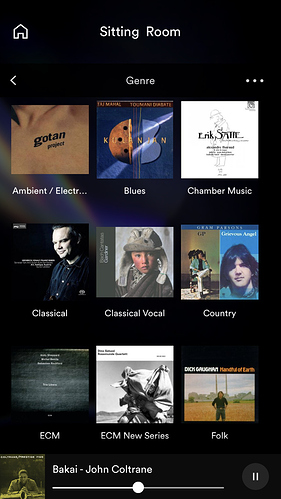 I don’t have a genre level which I’ve always found infuriating, is it just not available relative to the Unitis or am I being a bit dumb?

Which DLNA Server and Control Point are you using?

I think this is an Asset-specific feature called UpStream Artwork:

“UpStream Artwork enables artwork from the first discovered track to appear next to an Artist, or Genre”

I’m not, just using basic Naim app with tidal and a zen, genre available on zen but I’m now guessing it’s a tidal limitation rather then the app

Tidal doesn’t use DLNA so my comments don’t apply.

The Naim app is capable of displaying the information if it’s sent to it (as shown by HH), so it’s most likely that tidal doesn’t send the information. However the app does behave differently when accessing Tidal (due to this not being a DLNA interface).

In the case of the Zen, it’s running on much more powerful (and consistent) hardware than a phobile mone, so it can do things like extracting metadata and doing ‘on the fly’ lookups via t’internet.

I’ve been trying to use the app for a few weeks now. My opinion is it’s too darn unstable

e.g.
I have the clock screen saver enabled. Often it will not wake the app up when coming off saver. What I mean is you tap the screen to wake it up and the NAIM app will fail to restart.

Often I get a message it can’t see the NDX. Retry a few times and that normally fixes things. btw 100% good wifi with the router only 10ft from the tablet and no walls.

I think I’m fairly different than most app users because I have a dedicated tablet next to the NDX that’s on all the time with the app shown. Most people I bet use their phone and flit in and out of the app so it’s constantly refreshing.

btw brand new high spec Android 8.1 tablet. I also see the same issues with an Asus tablet sat right next to the router. I thought it might be the aged Asus so I went and purchased a new tablet. Same issues

If this was my only method of choosing content for the NDX then I’d be throwing the NDX in the bin and buying a different brand!

I have the clock screen saver enabled. Often it will not wake the app up when coming off saver. What I mean is you tap the screen to wake it up and the NAIM app will fail to restart.

The app always restarts for me when using the Qb on my Android phone. On the the main system I just leave the Lenovo tablet on.

This is a known problem and I have mentioned it before. I am suprised that it has not been fixed though and is a definite oversight on Naim’s part.

Often I get a message it can’t see the NDX. Retry a few times and that normally fixes things. btw 100% good wifi with the router only 10ft from the tablet and no walls.

This is a discovery issue S-i-S is the expert on here. I assume you have the NDX wired straight from the router?

I think I’m fairly different than most app users because I have a dedicated tablet next to the NDX that’s on all the time with the app shown. Most people I bet use their phone and flit in and out of the app so it’s constantly refreshing.

You may well be wrong here. I have a dedicated Lenovo tablet running Naim and Bubble app constantly.

I recognise several of these issues.

For me they all went away when I installed a separate WAP and turned of the WiFi on my ISP supplied “router”.