I’m not a “trust your ears first person”.
I’m “math person” by education, and occupation.
Which means I enjoy learning stuff, and also means I like “specs”.

The paradox is that I bought all my Naim gear based on a past emotional experience; an encounter with the CD555. Ears first then!

I guess I can be qualified as an audiophile, but the kind that never goes to showrooms, never reads audio magazine nor audio reviews, etc.

But I’m changing my stand regarding audio gear…

I realised there is a whole world of options.

I also realised that some audio companies publish their specs others don’t.

By specs I mean :

Naim doesn’t publish their specs, not even for the 500 series.

Reading interviews with Steve Sells over the years he seems to have no qualms about choosing circuits or components that might not measure as good as other manufacturers…if it gives the right sound improvement. So on that basis many customers choosing by those criteria would perhaps be deceiving themselves. Over-the years many hifi mags have published some of the data you are looking for. My memory if correct is Naim measure pretty good, but probably many measure better. Just my guess, perhaps @Richard.Dane or @Naim.Marketing could add?

These are for example some reviews on the Naim website by hifi news and hifi critic of the nap 500 with lab report of measurements.

Yes, Naim give the basic specs that most would expect, but beyond that, for anything more in-depth, I think they would say that specifications in themselves are not a great way to tell how a piece of equipment will sound or perform. Of course, when submitting kit for review, Naim kit is tested by reviewers and often they give in-depth measurements. IIRC recent kit in particular tends to measure very well - certainly up there with some of the best in many areas, but again, how one might correlate that with any meaningful indicator of how you may or may not like the sound it produces is impossible to say; ultimately whether you like it or not will all boil down to the listening.

Reading interviews with Steve Sells over the years he seems to have no qualms about choosing circuits or components that might not measure as good as other manufacturers…if it gives the right sound improvement.

Indeed. There is a nice video were he explains his design choices for the Statement. Very interesting! But correct if I’m wrong, he didn’t design the NAP500.

These are for example some reviews on the Naim website by hifi news and hifi critic of the nap 500 with lab report of measurements.

Yes, those reviews, including their lab reports, are on the NAP 500 web page. The amplifier measures pretty good. I believe not publishing them is a matter of marketing choices.

Everything distorts a bit and there can never be a zero in that regard, so when it distorts, so long as it’s “nice” distortion, our ears perceive a character that we may like. This is why tube amplifiers measure poorly, relative to, for example, Bruno Putzeys Eigentakt class D designs, but often sound good to us. Nice distortion also explains the prevalence of tube amplifiers amongst guitarists. I guess this explains why a brand sound flavour may be preferred over another and makes it difficult to say that one is better than another, only different. Then, of course, we have to factor in our own hearing.

A good example of this is how better power supplies can improve the sound of a Naim preamp, without any change in how the preamp ‘measures’. Therefore publishing a set of measurements is pretty meaningless.

I think it was Roy George, but he had the same mind set. I did read an interview with Steve where he contrasted his previous work at i think Cambridge audio and Quad…the latter went for the very best measurements…which would lead to the best sound🤞🏽

I disagree, measurements with a given powersupply are not meaningless, and in deed in a commercial undertaking may well be required. For consumers however I think many would not understand what the measurements mean in terms of sound presentation… I choose my word carefully as maximum sound quality almost certainly doesn’t equate best sound performance… so measurements could open a whole can of worms… and I think for consumers it is probably best avoided.
Just about everything can be measured… if we can measure Quarks at CERN… we can certainly measure the performance of an audio replay product… but are the measurements meaningful for the target audience… or does it descend into a meaningless less or more best in absolute terms of a specific measure for the layman … as was the fad in 70s hifi.

but are the measurements meaningful for the target audience… or does it descend into a meaningless less or more best in absolute terms of a specific measure for the layman … as was the fad in 70s hifi.

Well exactly and that’s what I meant. The ‘standard’ measurements simply don’t tell us all we need to know about how one piece of kit will sound compared to another. Certainly I wouldn’t buy something if it measured poorly, but after that my ears make the decision.

Well exactly and that’s what I meant

Cool… but perhaps even our little mis understanding shows how publishing detailed specifications could lead to real confusion and unnecessary consumer uncertainty.

Measurements are a horrible double edged sword. And for multiple reasons.

Take Bose, they publish no specs for anything at all and the consensus is “Bose have something to hide” . Bose also take the “Specs tell you very little about the sound” stance. Yet no one mistakes them for a serious hifi manufacturer (I actually like Bose products - but I know what they are and when they should be used - and as a hifi isn’t on the list). Naim have certainly been accused of similar things before.

But then if you provide them you run afoul of another problem. 90% of audiophiles fancy themselves as a bit of an expert, despite the fact they are so ill educated on the topic they don’t even know what they don’t know. They are likely to misunderstand and make sweeping declarations about quality based on them.

And yet failure to provide them just kills sales in some areas. While those in the UK and a small number of other countries are accustomed to the dealer and demo experience, it just doesn’t exist in most of the world. I’ve never seen a proper demonstration room in Japan in 20 years. Absolutely worthless as a buying tool. But the market is trained to make nearly all buying decisions based on specs. Work out compatibility between two components based on specs and by damn, the price of something better be reflected in the specs in some way or the consumer won’t consider it.

I had a friend who was mildly interested in Naim. What killed it for him was he saw a pic of a SuperCap. Looked up the caps used. Decided they were utterly rubbish and that Naim use rubbish parts.

Whatever you do regarding specs; publish in detail, don’t publish; you’re kind of screwed to be honest.

Naim (AFAIK) have never published anything more than the basic spec’s like output power and input sensitivity etc - even back in their early days when it was considered very unusual (and probably cost them sales). I came to admire that, as it made me think differently about what was far more important when buying new kit.

Maybe not everything comes down to Q.E.D.

There seem to be two opinions regarding measurements, presented as antagonist.

And, btw, I hardly understand why some opinions are so clear cut…

The problem with the statement “measurements don’t tell if the product sounds good” is that “good sound” is utterly subjective.

Good sound isn’t universal.
It’s down to ones taste.

I tend to share @Simon-in-Suffolk opinion; measurements can be useful information, especially for power amps. Some of those measurements can give an indication of what to expect regarding some audiophile considerations (e.g. signal to noise ratio).

Of course, when it comes to buy a piece of gear, the final decision is based on what we hear and therefore on taste. 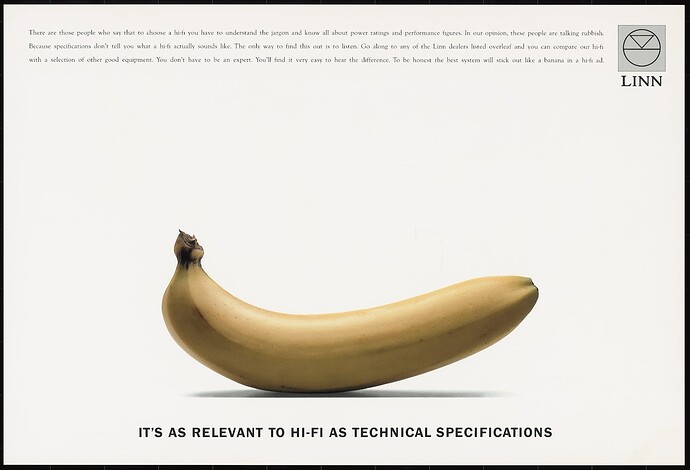 As I said, clear cut opinions…

But at least that one is funny

Measurements are good, buy please refer to the standard being used.
My 400w/ch RMS Musical Fidelity power amps must sound better than my little NAP140 that manages only 45w/ch RMS into 8 ohm? Surely. Oddly, its just different.
Well of course not.
But MF never refer to any standard so that, those that like to compare, can…compare.
Very often we are comparing apples with crab apples.

My 1996 NAP140 is an absolute belter! I just realised that apart from the NACA5 it’s the only box left from the original set up!

Already in the 70’s there were about 150 meaningful measurements you could make on a basic class AB amp. How would you judge these against each other?

This according to an academic, prof. Matti Otala. The man who introduced transient intermodulation distortion (the importance of current in amps) to the world. If I remember this correctly I think Electrocompaniet started up in the 70’s based on Otalas research.

So learning to use your ears without to much confirmation bias etc. is just a more efficient way of doing it. And you get to listen to music at the same time.