I have this set up: LP12/Ekos/Archive Lingo, CDS2/PS, NDX. Powered by a 52/Supercap, pair of 135 mono blocs and lovely Shahinian speakers.

I also have a Hicap not connected at the moment which could be brought into use.

I have moved and simply don’t have the space for 9 boxes and need to reduce to 4/5. I have just sold the 52/Supercaps. I would like to retain the main sources and the Shahinians but could sell the 135s.

My dilemma is how do I replace this superb amp system with something roughly equivalent in quality and without spending a fortune. I have a budget of around 5,000 (assuming that I sell the 135s) and would like to stick with NAIM. Happy to buy S/H or P/X.

I’m wondering why you need both a CD player and a streamer: why not just rip all the CDs and sell the CDS2? With the 52 sold you still have five black boxes and a system that won’t work without a preamp. What was your plan when you sold the 52 as the first step?

I set up a similar meme , wanting to downsize the boxes and retain the quality. You haven’t mentioned the phono stage (or did I miss that?) . All in all my audio/hifi system has around 12 boxes . Doh

I would say that if looking new it would be SN2 and HiCap, not the same in quality but still pretty good and then a stage line .

I would also ask if half size units such as Stageline would be useful? You already have a HiCap

I had exactly the same system as you apart from the speakers and downsized to a Uniti - I now have a Nova and am perfectly happy. If that is too drastic for you I would try NDX2 and Supernait - both options with a Stageline and your Hicap.

A lovely system Yugster.
Which Shahinian speakers do you have? This may materially affect the outcome, as the Obelisk needs a fair bit of driving - probably more than any Supernait can manage, especially if you are used to a 52/135 amplifier.

hi - I have obelisk

I have ripped the cds but I like the whole cd experience - proper sleeve notes and the box sets of which I have a lot. Also the indexing system when you rip is a nightmare - not easy to find what you want. For that reason I want to retain a CD player but I agree that I could downsize to a one box as I also use Tidal and radio a lot.

Thanks. I think the issue is whether the SN2 which looks good, will drive the Shahinians. So other comments here think that is not the case and I will need another amp

Thanks. I think the issue is whether the SN2 which looks good, will drive the Shahinians. Some other comments here think that is not the case and I will need another amp

If you have the hicap already, I would try a Nac 72 for a while. Cost small money.

Have your dealer replacing the Lingo by a Valhalla saves you another box.

If you are emotionally attached to spinning discs, there are good one box cd players around, not needing a dedicated PS.

In all cases you are likely to degrade on SQ, but it will still be very good.

If you get the metadata right and learn how to use the Naim app then finding albums is a breeze. You can still keep the CDs to look at the notes. If you really only want four boxes plus the Linn you are going to have to do something radical, and if you want to keep the obelisks you are going to need an amplifier that is up to the task in both quality and power.

Do you know if they are Obelisk I or II? The latter are easier to drive. The 250DR copes with them OK.

Not sure. They look like this. I could check with my dealer later this week. 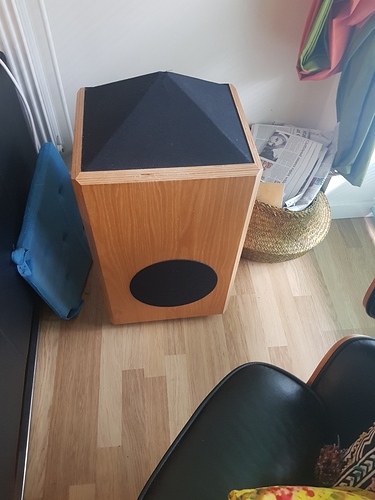 Yes, the Naim App is fine. Problem is with way some was entered and the metadata. I don’t know how to correct or get rid of duplicates.

Another suggestion: be radical, and rip the LPs as well as CDs, freeing up the TT space. And when done you can put the LPs and CDs into storage, freeing up the space they all occupy in your new smaller room.

To do that you’d need to buy a decent ADC, but buying secondhand then reselling means minimal net cost. And you’d need to tag with metadata - don’t make the mistake I made a few years ago, when, not knowing about metadata at all, I ripped all my LPs to make into CDs Not a problem with no metadata as CDs, but then I switched to streaming, with all the files I’d also kept on a hard drive as a backup ready for instant use but no metadata. Actually the Naim ND5XS I used then, controlled by the Naim app, had no trouble finding all my collection based simply on my storage filing system and file names. The problem was later when I switched to another player, using library software that relied on metadata… if you do rip CDs or LPs, it is worth spending a bit of time as you do it, checking the metadata from CDs to ensure consistency and nothing critical missing, and adding to the LP rips.

From the ply I’d say a II. If you send a shot of the bass radiator on the rear, I should be able to confirm.

After the rip I usually stick the jewel-box in a suitable recycling bin. Keep the CD:s as backup in simple space saving paper sleeves. Plus booklet & paperwork.

Are there any music-server, ipad/controller out there that deals with scanned cd-booklets? I have a suitable fast document scanner that runs both sides at once.

Or maybe just use evernote.com for this? They run OCR and make everything searchable.

Roon will serve out a booklet if you save it in the same directory as the album.

I have quite a few booklets from downloads but I think scanning my whole collect could be beyond tedious. Not sure I could even outsource this work to my daughter for a cash payment!

When CD started to take over from LP, it seemed as though album covers were just reduced down to a size that would fit in those awful, crappy jewel cases, making the text illegibly small, and everything about the printed material was just dreadful. One might have hoped that things would have improved on that front as CD rapidly became mainstream, but it didn’t. Why on Earth anyone would want to use CDs as a source of such information is beyond me, especially when you use an iPad to control a streamer, and that same device can so easily access the many online sources of information about the album, artist etc.

Well if you’re enjoying your physical media then I would keep the Linn, swap the CDS2 for a CDi/CDX, keep the NDX, swap the NAC52 for a NAC102, swap the 135’s for a NAP250 which would reduce the box count by 3 boxes and leave you with significant cash! More radically you could swap the NDX/52/Supercap for NAC272 if you need even less boxes.

Finally most radically of all you could go Linn, CDi/CDX, NAC272, active ATC speakers which would give you a superb sounding system and only 4 boxes.

We need a forum where those of us looking to move up the range can buy/sell with those who are trading down! I’m on the hunt for a nice NAC82/NAC52 and my mint NAC102 just came back from full service at naim last month! Was yours the 52 that appeared very briefly on ebay this weekend?