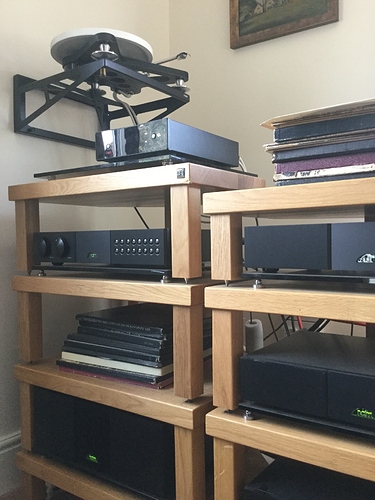 So yesterday I put the Naim glass under the Rega Aria (see photo). The Aria hadn’t been sounding as good as streaming but it’s sound benefited from the 552/500.

Now the RP10/Aphelion/Aria via SL interconnect sounds more than the equal of the streaming setup! What’s more the streaming sounds noticeable better as well.

So the glass for the Aria either through raising the Aria up further or introducing some sort of electrical/mechanical change has improved the 552. Member of this forum have recommended always having the 552 at the top. I thought the taller shelf above the 552 might help mitigate this a bit, but !!!

Anyone got an explanation.

Right now the Aria is sounding at as good as the Aura into my previous 252/300 DR.

I think @Richard.Dane was one person to recommend not having anything above and probably @DarkeBear. Having listened more since this dramatic change I think it is about timing - leading edge and transients as some say.

It’s as if the sound from all the instruments and voices are completely clear whether streaming or on vinyl. Mind you the the 552/500 did this in heaps before, but not as good as this. Genesis Trespass before had an overblown sound which made it an album I was not keen to listen to, while Selling England by the Pound was really good and even better now. Now Trespass is natural and all the instruments sound good together.

So is this what good timing does?

And what has the Naim glass etc done?

Somewhat inclined not the put my dedicated radial on its own CU now or try a Musicworks Reflex Ultra G3 mains block.

I think it’s down to having the sensitive phono-stage away from the power supplies. And the signal cables from RP10 also are less affected.

I don’t like having anything digital sat above or just below the 552. Ideally the 552 should be on the top shelf. Of course, having said that, mine isn’t, but purely because with turntables and big reel to reels I need all the top shelves I can get, so the 552 goes in the next best place between two intermediate levels with just the RP10 above and the Superline below.

I used Naim (spec) glass and Naim cups and balls under my LP12 on top of a Tiger Paw Vulcan board and would recommend it highly.

Whilst I can’t be absolutely sure what exactly happened, further SQ improvements have come from removing pipe insulation and getting all ICs including DIN to XLR hanging freely. There are only millimetre crossing clearances at times. Given the sensitivity of these I must assume that is the more likely explanation. The left hand XLR was touching the rack and this messed up the timing. Now have a wonderful soundstage and beautiful sounds on all I play. The old thing is that the effects depended on the music. More dense music is now decongested.

I thing the pipe insulation should be avoided and let it all hang freely!

I think I have a better understanding of what the Naim sound is now.