The new demo room rack shelving bears a resemblance to my own design.
I wonder if they used the same vibro-suppressed polymer with the shelf bonding & MuMetal substrate laminate.
… an improvement on Fraim ??? 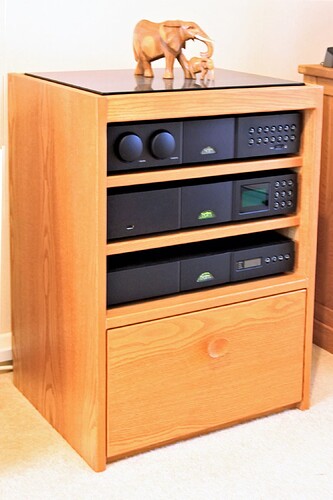 The elephant in the room

The shelving on the back wall is to house stuff not being used, so it’s ready for demo. The Fraim is on the right hand wall, as you’ll see in the OP’s final picture. It would be strange indeed if Naim didn’t use it in their own dem room. But they do.

Plenty of Fraim in the pictures. Its only used for the equipment that’s in actual use. The storage rack is far more practical for, er storage, and it means you won’t be having to fish about under the rack looking for a Fraim ball every time you slide the gear in or out of the shelves…

You’ll also spot all the components in the rear rack are showing their rear panels. It’s done this way so that dealers can be shown how to connect it all up.

I wonder whether they still have to do it blindfolded…

Naturally! How else are you going to determine whether they can be a 500 level dealer? For Statement, you have to show your forklift driver’s license.

Is there no dress code at Naim?

Yes, anti-static white coats (blue for visitors) and anti-static foot straps or footwear must be worn in the production and service areas of the factory.

I want to add that I wasn’t allowed through to the production areas. I stayed in the listening room the entire time. So it wasn’t a factory tour per se. I wanted to hear the power amp comparison and acquire answers to the Solstice anomalies. Jas and Steve who are great guys did their best to oblige.

I’d imagine it’s also to know which box is what - the Naim style doesn’t give much away from just looking at the front panel!

It’s pretty well covered Graham that fitting a different cartridge to the Equinox can be tricky due to the counterweight and bias settings and also potential underside of head shell interference with cartridge pins. When those Equinox’s wear out even those who scoff at changing the cartridge now might be glad of any attention to it from Naim.

Naim have said they will keep spare of equinox, but have not said for how long so it could well be an issue at some point. The equinox is heavy

Is the Equinox the cartridge fitted to the Solstice?

Have there been any reviews of the cartridge (assuming it’s the Equinox) outside the context of the Solstice?

Who manufactures the Equinox? Clearaudio?

I understand that the Solstice comes as a package, but it would be fascinating to read any reviews of its component parts against other high end components.

Equinox is made by Clearaudio. It is fundamentally a Clearaudio design ( Roy George’s input was minimal) The only “reviews” of the fragmented Solstice package seem to come from the handful of us on the forum who have made the changes.

Perhaps more will emerge with time, as owners of the Solstice owners start to experiment with their decks.