Upgrade, downgrade or neither?

I’d keep the Kans. They could probably do with a refresh of the caps in crossover as they’re getting on a bit but otherwise they should do you fine.

That’s a nightmare job though isn’t it?

If a job’s worth doing…

Keep the Linn Kans, they are gems.

I had both the Kans, the SBL. Guess what, the Kans left the SBL in the dust.

It was a big mistake when I replaced the Kans with the SBL, because I based my decision on a HIFI Reviews article (probably written by Malcolm Steward

A no brainer really. I still have my Mk.1 purchased 7 January 1984. They still sound as young and alive as they were back then.
I would keep the Sondek/Ittok as well and get new electronics you know where.

I would keep the Sondek/Ittok as well and get new electronics you know where.

Kans = classic. Or is that klassic…

What a littlebig gem of a speaker!

Mine more than held their own for 35 years.

What a littlebig gem of a speaker!

Yes, they are indeed.

By the way, Mine came with the dedicated stands designed specifically for Kans.

Yep. Mine too.
Good stands.

My Kans are now rehomed in China, and the stands to a City guy.

Agree with all of the above. I now run B&W’s 800 diamond series (firstly 805D2 and now 804D3) - other than original Linn Isobariks (Kans with bass) these are the first speakers I have found that are as much fun to listen to as Linn Kans.

Unfortunately I no longer have my Mk1 Kans - but if I still want to hear them I just need to visit my son! BTW Kans love Naim amps - I started with Nait1, then NAP110 and finally NAP250 - every time the Kans got better and better.

Another vote for the legendary Linn Kan’s. These are the later Mk1’s with flush speaker terminals. I also foolishly parted with my original’s, a big mistake, tried many different speakers, but they just didn’t have the same presentation or that little bit of magik! most sounded muddy in comparison, thankfully managed to source another pair in even better condition than my original’s, in a full Linn/Naim system they work extremely well. 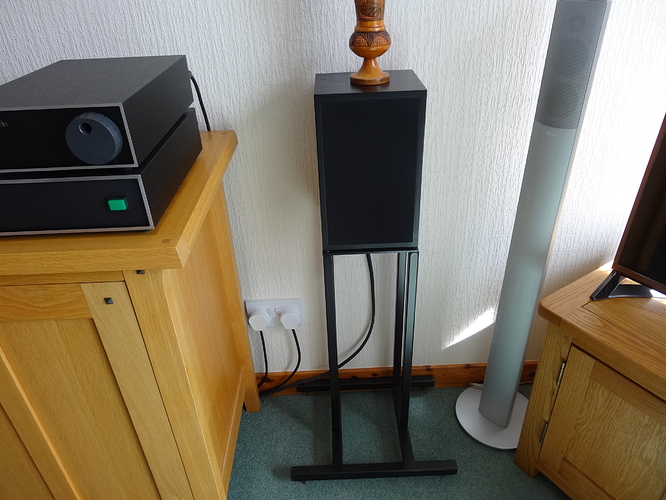 I sold mine after a too-good-to-turn-down offer of ProAc Response 1SC…very boogie-able speakers themselves. But those Kans will live long in my memory. Davids taking out Goliaths indeed!

I have the same variant and agree, using CB Naim amps (with Valhalla LP12), they are fab

I spent about 15 years with Kan IIs as my only speaker and not sure I could go back to that again. They work for me now cos I’ve got another setup with bass (for rock music in particular).

I shouldn’t have sold mine either (mint) but actually I’ve since found I prefer Kan 1s so it kinda worked out in the end.

My speakers are mark 1 Kans.

Now that we have re-established the status of the Linn Kan I, let’s discuss tweeters again then. Scanspeak D2008 or Hiquphon OWI-92? I am of course with the Scanspeak.

@Chag
Interesting not sure what tweeters are fitted in my pair, possibly the earlier Scanspeak ? Ser No’s are 35073/4 untouched since new circa 1986/7 ?
My original pair had the protruding binding post terminals, from memory these were mighty impressive but could get a bit bright and tiresome at times, I prefer the ones I presently use.

Like you, I prefer the Scanspeak based purely on the treble performance. However, my older pairs of Kans with B110 drive units (one pair with Scanspeak and one pair with Hiquphon) can both sound a bit ‘odd’ on some tracks. Certain frequencies can sound a bit ‘sqwarky’ if I’m to be unkind. So for long-term listening I prefer the more neutral sound of my later pair with B110B drive units even though they don’t have the Scanspeak tweeter or sound as musical as either of the older pairs.

Sorry for the long-winded answer!

I have three pairs of Kans. I guess I must like Kans. I have a very early pair of Kan 1’s, a later pair of Kan 1’s with the newer tweeter and terminals and a pair of Kan 2’s. I have been using the Kan 2’s mostly because I can drive the woofers and tweeters with separate amps (NAP 110’s). I do like the tweeter used in the early Kan (Scanspeak) in many ways more than the later tweeter. However both are quite good.