Naim is perfect for the Duevel Planets

In my dedicated listening room (20sq meters) I have several amplifiers, speakers and sources (one analog and six digital) and once a month I switch the components, mixing them to try the synergy between different designs and brands.
After the last three years doing that, one of my favorite combos is the Naim Nac122x + Flatcap2x + Nap150x with the Duevel Planets omnidirectional speakers. All interconnects are Naim or Belden 8042 when connecting a cd player) and speaker cables can vary between Atlas Equator, Supra Ply 3.4S and Naim Nac5 (the least favorite, go figure!)
What a surprising little system!
That Naim combo (I also have the CD5x cd player) is very special indeed: powerful, transparent and well balanced sound added to a wonderful design and build and use feeling.
Although it can be less interesting with the Kef LS50, Quad L11, ProAc D18 (for example) it is with the Duevel’s (with the help of a Rel Stampede subwoofer) that we can see what marvelous pre-power combination this is: the soundstage is huge, the image is correctly presented and well balanced, the bass deep and clear and the treble detailed but totally non fatiguing. They even transform less stellar recordings (50-60’s Jazz and Blues) in a truly natural and enjoying experience.
It is like “live” music in the room.
One surprising thing is the ability to be transparent and to show the quality and differences between sources: Naim cd5x, Rega Saturn, Parasound bcd 2000 + dac1100hd, Cambridge cxc + Denafrips Pontus II dac, Musical Fidelity AMS cd player… all are presented honestly and in a palpable way.
The power amp (declared) 50w/8ohms are more than enough to command the Duevels drivers (4 ohms / 85db) making this modest combination (the Duevel’s cost less than 1000 euros) one of the most surprising and enjoyable I had ever in my system.
These small floorstand speakers are easy to set-up and should work with very well with other Naim amplifiers.
Does anybody out there uses Duevel, or other omnidirectional speakers? 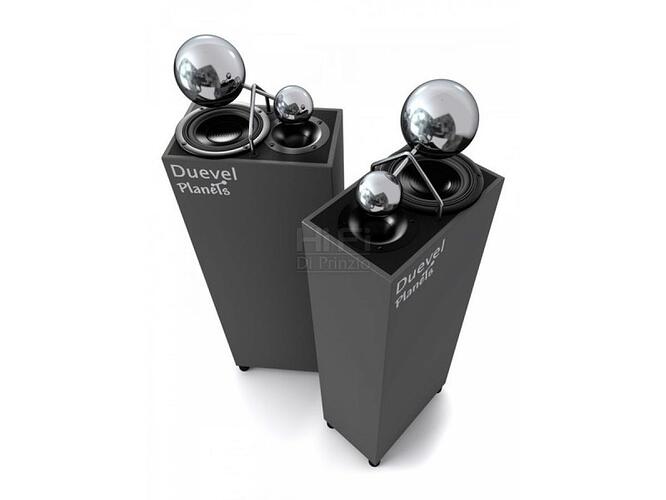 Never heard of them before today, but it is really good that you are taking the time and the permutations to get the system that suits you.

When I was assuming my NBLs wouldn’t work in my new room because of the dry lined walls I looked at a few omnis. I heard Duevel Bella Lunas at a dealership in Paris, though just in the main shop with an ATC integrated not a proper demo. They were promising and I thought maybe Sirius would be an option. The dealer thought they’d be too much for the volume I had to fill and suggested he arrange for me to hear some German Physiks HRS130s. I still haven’t got back to him on that. I also found Advantages Audio César and managed to hear a pair at Kora Audio’s factory near Toulouse, with Kora Amps and CD player. These were very promising and it was agreed I could borrow them later in the year for a home trial. They use a pair of opposed full range drivers and a bass driver but only the bass driver has any filtering and all drivers fire vertically at deflector “cones” a la Duevel Venus. 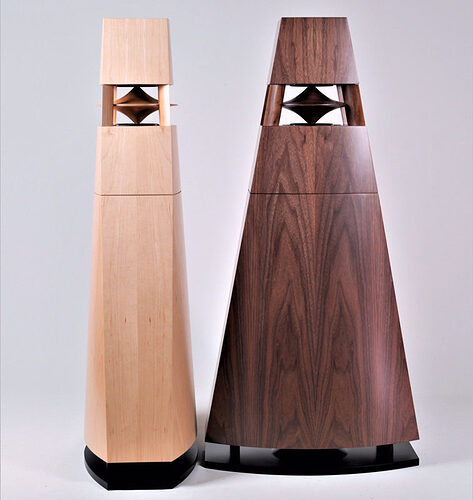 Meanwhile I’ve got my NBLs to work well in my new room and it will take something really outstanding to dislodge them. Current thinking is to explore a second 555ps first.

Wow! Never heard of the Advantages Audio César… thanks for sharing.
I have only listened to Shahinians speakers at audio shows and I believe that they were not proper placed in the room, because they didn’t sound as good as they can.
I suspect that all omni speakers with the drivers on the horizontal plan have a more natural delivery than the speakers with angled drivers.

I don’t think they get about much and it may already be too late. They’re still on Hifi.fr but the link to the manufacturer from the six moons review now says the account has been suspended.

I became interested in some of Frank’s Shahinian comments when he and Simon started experimenting with them at Audio-T Reading and in the end couldn’t resist scratching the itch with a demo of the Arcs and Obelisks, with which I was much more impressed than I had ever envisaged. In the end I got a home demo of the Diapason’s and bought them on the spot. I couldn’t imagine ever wanting anything else now.

Its certainly a matter of preferences, they do provide a live feeling you get by listening to concerts.
However I sometime miss the precision and pin-point image so called “ordinary” speakers perform.

PerF is spot on, that is what good omnis can do… and right now I fell that I can do without the precision and pin-point because I am having way too much fun

I’ve had a pair of Duevel Venus for a bit over four years now. While I typically use them with my German built LinnenberG amps and DAC/preamp, they sound very good on my Naim XS3 and ND5XS2. I enjoy either amplifier setup.

I have also had Larsen Model 4, Shahinian, Ohm Walsh speakers on Naim systems. I tend to like Omni type speakers obviously!

I’ve been thinking of trying the Ohm Walsh speakers. What did you think of them? Would a SN2 be a good match?

Pat, I liked the Ohms, I rebuilt a pair of OW-3X, had a pair of OW-2 and also MWT’s. I do like them quite a bit. The first two were much older, refurbished units with the pyramidal style cabinets, which are quite lovely if you enjoy that retro/mid-century modern styling. The OW-3X I bought the then upgraded 1000 series drivers for them. The MWT was a new pair, roughly back in 2008. They formed a 4-channel home theater setup, and the OW-3X were also used extensively as a stereo setup as well.

The Ohms have a very nice, open soundstage, with very good bass response. They are a speaker that can be listened too without much of a sweet spot, you can pretty much get a very good stable image sitting anywhere within the edges of the speaker pair. Pretty nice. It all has to do with how the tweeters are angled inside the cans, and the somewhat omnidirectional pattern of the main driver.

Older Ohms if they have not been upgraded, by now suffer various issues, surround rot, some have foam surrounds, others cloth, so you need to check them if buying used. Also, the treble end can sound a bit fuzzy due to older tweeters. Note that I am talking about the CLS versions, not the true Walsh driver versions such as the A and F.

The latest, newer series sound very good, can be placed reasonably close to wall behind them, say 6-12", and still sound very good. The back wave is attenuated some with felt/damping inside the can, so not totally omnidirectional in its wave pattern. Typically the Walsh speakers are purchased by model for the size of room, and that information can be found on Ohm’s web site. Typically they all have the same family of sound, just improved bass response as you go up the line.

What I do not like is the build quality. And that is just my own pet-peave. Crappy components, solder jobs etc. inside the cans. No need for that, but it is there. Average drive units, and average veneering overall. But, even with all of this, they do sound good, so really it is kind of just one of those things. Ohm is very responsive as far as spare parts and refurbishing of older speakers.

As far as your SN2 driving them, it depends on model and your room size. The Ohms do tend to like current/wattage behind them, while they do not appear to be terribly inefficient, in my opinion, more power really opens them up a good bit. I thought too, they were not the best at playing at low volume levels, again, they need woken up a bit to sound at their best, again, in my opinion. Just a side note, I did drive my Ohms with a NAP 250 for awhile, and it did fairly well in a reasonably average room. Where they really sounded good was with the likes of a Plinius 8200 integrated that could push about 200 wpc.

A bit to consider there, and as always, trying to hear them in your system is the only way you will know if they fit you and your system. Not sure where you are located, but Ohm does have a very generous try-at-home or return scheme. They are running a bit of long schedule right now due to parts shortage/labor, so it might take some time. Finding used ones is a bit easier, just keep in mind repair issues etc. They are fairly easy to work on yourself if you are handy though! Hope this helps some! Take care! Tim

Wow, thanks so much for the detailed reply. Your experience is very helpful. I am actually looking at the Walsh 1000 Tall Speaker, since my listening area isn’t that large. Looks like the extended trial will be a big help in deciding on them. I live in a town home so the lack of low volume may be a concern.

I do think the smaller models do play a bit better at lower volumes, plus do not have such prodigious bass output, you might get along fine there.

Keep in touch if you decide on them, would love to hear how you get along with them!