How good is the NAT01 Naim tuner? Is it on par with CD players from the current range? I have read claims of it being the best source component by Naim. Does this hold any merit or is it just a rose tinted glasses view? Could it really be as good as the CD555?

The NAT01 is very different to digital sources. Ultimately it would depend on the transmission, but live Radio 3 is something quite special. Day to day my LP12 is the better source but it should be considering how much more it cost. I would listen to normal broadcast (non live) over my Rega cd player any day though, even when I’m listening to rebroadcast digital recording! Can’t explain how that makes sense.

With a good aerial and decent reception the 01 is very special. I recently had mine serviced and I have not even thought about listening to my NDS/555 or my RP8 since! It’s mesmerising and on a decent R3 broadcast it’s as close to “being there” as I’ve experienced with any Naim source.

It depends on the broadcast…at least for me. Feed it a live broadcast from BBC R3 like a Prom and it sounds sublime. I purchased mine 16 years ago and had it serviced but Naim around 8 years back. It’s performed faultlessly the whole time I’ve had it. The heads are no longer made and the display can fail but both are fine on mine. I don’t have a Ron Smith monster aerial but an 8 element in a good signal area with full quieting. It deserves more than an omni for sure!

thanks for the fast reponses. if the heads are no longer made what exactly would that mean? is there a limited shelf life for the units?

AFAIK Naim can still service their tuners. It boils down to having the right equipment (Naim have this) and the skilled personnel (ditto) to do so.

Not really. This relates to the tuner head. It didn’t put me off and I bought my NAT01 years ago. The tuner and the power supply are robust. I sent mine for service at Naim as they are also able the align the tuning head.
If you are seriously interested I suggest you try to source one from a reputable dealer like James at Tom Tom Audio. I bought my pristine NAT01 from James and have ordered both new and used kit from him.
If you’re anywhere near Mid-Sussex your more than welcome to a look and a listen.

One note of caution: if you get one of the original chrome versions the power supply has some redundant features. Which is kind of nice from a historical perspective, but the leads that connect power supply and head unit are non standard and would be a custom item if they needed to be replaced, or one of them at any rate. There are two. I got mine from my dealer and Chord were quoting silly money to make up a replacement. Fortunately we found an original in working order. 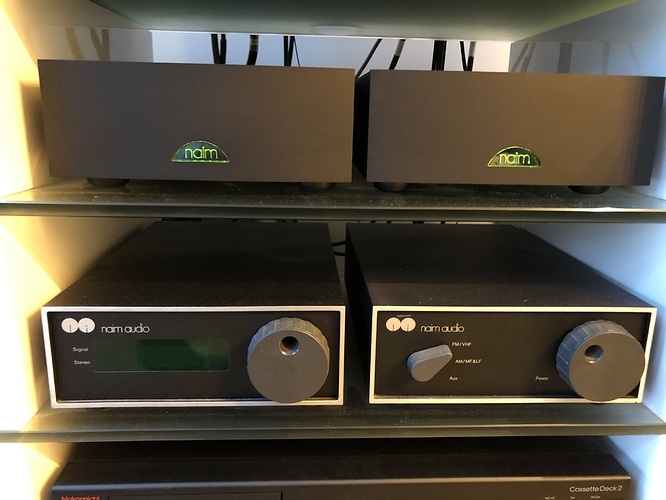 Very attached to mine anyway.

The 7 pin Din lead used on the early NAT01 can be a tricky one to replace if it has gone missing.

Is is off to preserve the life of the display?

Also is there any way you could separate the NAPST from the tuner head?

Yes, Dave. Turned off to preserve the display. When I work from home I sometimes exclusively use the 01 and although to be fair it’s not the most critical listening I don’t really notice much in the way of change during a day as it warms up. It may be of course that I’m missing a trick and it could sound even better if left on. But the LP12 is my main source so preserving the display wins out as I don’t think that can be easily replaced.

It’s too awkward to get at the leads to keep the NAPST powered while disconnected from the head. Not sure live unplugging would be wise either.

My NAT01 is on the 24/7. I don’t listen everyday but it’s there if I want it. I use a small Ron Smith, which also feeds my Unitiqutes, which I use everyday. I wish there were more live music on FM. Or am I missing a trick?

IMO, a SOTA tuner such as the NAT01 is the ultimate source if you are listening to a direct live FM concert. Too bad they had to digitize the FM band for the sake of profit.

Your NAT01 has the later LED display, these are not prone to failure like the earlier VFDs.

Yes, cheers. Aware of that, but the led for the stereo indicator has failed already so I’m erring on the side of caution. Both units were serviced around a year ago.

I still have my NAT01 in my system, but being in Ireland, I can no longer get a signal good enough to feed it. Very frustrating!
In it’s day, with a proper signal, it was a magical source. It made the Proms (or any live broadcast from Radio 3) come alive in a special way.
Of course I can use it to listen to RTE Lyric FM, but that is a pale shadow of a real classical radio station, probably understandably, but regrettably.

My 01 is about 14 years old and has so for not needed a service. My dealer says a sign it needs a return to Salisbury is it goes off tune. Also on 24/7 with later display.
Its a brilliant tuner and fully up with my LP12 and CD555.
Interesting to hear from DaveEngland how it performs against the NDS/555.
Mine is on BBC R3 most mornings and its a treat seeing they are playing, I assume CDs.
The lunchtime concert, weekdays, from Wigmore Hall being live is great.
I have a B & O 5000 tuner in a cupboard. Other tuners of the period were Revox and Yamaha 7000, all rated, but I think the 01 is THE one.
Play a Proms broadcast from your TV Freeview and no comparison.
Douglas.

I have an NDS/555DR and on live BBC R3 broadcasts prefer the NAT01 - instruments just have an extra dose of realism. Having said that I do spare the NAT01 for casual listening now that I have FTTP and a decent broadband connection!

The NAT 01 is very special, on par with any high end source. It needs good supply, ie a good ariel and it needs a good signal but get it right and its will give you many years of enjoyment.

Agreed. I mentioned on the old forum that I have even found CDs played on BBC Radio 3 can sound better than from a server through my (at that time) NDS. I now use an ND555 and still reckon a CD played, for instance, on the Saturday morning Record Review programme can sound better than my ND555. I still believe the humble NAT01 is probably Naim Audio’s best ever source component. The only problem, of course, is that you can’t choose what is played.

Mine is an olive unit, purchased in the mid '80s from Grahams Hifi. It was serviced a couple of years back. I use a Ron Smith Galaxie 17 and keep it powered on 24/7.