I have just bought a ND5XS mainly for internet radio, but I was hoping to stream the music from my WD NAS server, which up until now has been just used as a backup.

The ND5 finds the NAS but states “No contents shared”. I have just read the reference manual, which states I should have Windows Media Player 11 installed on any UPnP server.

Mildly frustratingly, I am lost as to how I install WMP on a NAS server.

Can someone advise who has this feature working?

We need more info on the WD server. What is the actual model & what UPnP software is installed, you say Twonkey in the title line, can you confirm that.
If you do have Twonkey, that is the UPnP software & that should be used to serve to the ND5. If its installed but not running, thats what you need to get running. I would not even try to load WMP, I’m not even sure it will do the job you are looking for.

You don’t need WMP on a NAS, you need a UPNP server. If I remember correctly, the installed one on WD is Twonky. Try enabling Twonky on the NAS. What format is your music stored in?

I am not familiar with the WD NAS, however when I first started streaming I used an NSA 325 NAS, which used Twonky, feeding an ND5XS. Twonky was a bit clunky, often delaying finding my music when at tge start of a session, and I didn’t like it much. I installed Logitech Media Server (which was free of charge) and that worked much better – it was a doddle to set up and the ND5XS readily and reliably found all my music without any glitches.

To confirm other replies, if you have Twonky that should work fine - I have a WD with Twonky streaming to UnitiQute. can’t remember if it needs to be enabled ‘out of the box’ but your media needs to go into the shared folders. Also, maybe make sure in the server settings that the right sort of media files are being shared. If you use the IP address of the NAS followed by :9000 you should get a screen like the pic shown 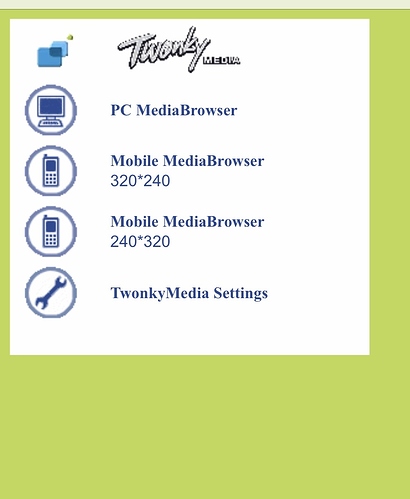 I think that might be the problem. The ND5XS finds the music fine on my laptop, so it is not a problem with format. I do know that the music is not in the Shared Music folder on the NAS. Obvious when you think about it. I’ll try moving it from My Music (as opposed to other’s in the house music), to Shared Music folder.

It made no difference putting some music in the Shared Music folder. I think the best course is to buy a new NAS server. Any recommendations as to reliable ones appreciated. I’d prefer to stick with Western Digital or Seagate.

There are a couple of very well tried and tested NAS/music servers, Synology or QNAP, running Asset or Minimserver. Both servers are very well supported by their developers, and are known to be good performers. I would suggest that you stick with these.

I have just bought a ND5XS mainly for internet radio, but I was hoping to stream the music from my WD NAS server, which up until now has been just used as a backup.

The ND5 finds the NAS but states “No contents shared”.

That’s an expensive way of getting internet radio ! I admire your style

As others have said the music needs to be in the shared folders - though when I had one it ignored anything that wasn’t placed immediatly in the share - it was never happy if I moved or copied the music to the share - never did work it out and, again, if I remember correctly, the only settings for server were on or off.

There is a fairly cheap QNAP box - the TS128-1 (about £120) which takes a single disk and needs no tools to put it together so you’d be up and running for around £200 with a WD red. Just add Asset or similar.

Yes +1 for ChrisCU post. Synology or QNAP with Asset or Minimserver, no need to look anywhere else. For HDD, the most popular is WD Red.

I have a couple of older WD NAS devices which are ok, not great. They both run Twonky and I can access them on a Nova via the Naim app - Twonky can certainly work after a fashion, though there are better alternatives out there.

I’d take a look at the WD’s model number and then try to find the manual on their support page - depending on Twonky version and settings it may not automatically monitor for new content in shared folders (might only do so on a restart which would be daft but possible) - assuming it’s running in the first place, so you may need to login to the admin pages and poke around a bit - if you can’t remember admin credentials they normally let you reset them preserving the data on the drives but do check instructions carefully and wise to have a backup.

The WD should certainly work, just it’s not always best at organising things as you’d like, but the existing metadata in files needs to be suitable whatever you run.

I’d take a peek at Asset either running on an always connected computer or raspberry Pi if you don’t want to splash out on a new NAS currently.