Ok so using a Dell Windows laptop i5, installed Roon Core on to it, so do i need to ethernet my laptop to the Switch or Nova or is WIFI ok.

At the moment not getting anything in the System output.

Roon works fine over WiFi on my MacBook. I have a feeling it sounds a little better with a wired connection when I’ve tried it that way.

Got it, i tired WiFI, then wired to my switch, did not work, then laptop to router and works.
Well test, but not sure of all the fuss, apart from it all being a bit fussy (aesthetics and settings).

You can use wifi but would not recommend to have the core using wifi to pull and push as it will put a bigger demand on your network it if your using streaming services. The core needs to pull from the internet source to the core and then push back out from the core to the endpoint so your using 2 x of your normal wifi bandwidth as its not duplex like wired up/down comes out of you whole wifi bandwidth. Most issues playback come from wireless cores. Wireless to endpoint only is not really a problem.

I’d say a big ‘depends’ on your recommendation / non-recommendation. I’m aware that Roon would rather people use a wired Ethernet distribution network, but it also depends on the type of WIFI you use at home as to what you can get away with…

If a person just uses their ISP’s home router for home WiFi, then this tends to suck and often results in blackspots and poor coverage, but if a person has a decent WiFi access point implementation, which is thoughtfully placed, the new generation Naim streamers work pretty well with it.

I personally use a dedicated MacBook Pro (Retina, 13-inch Mid 2014 build) with a 3Ghz Intel Core i7, 16GB RAM and an internal 500GB SSD drive, connected to a Seagate external 8TB Drive for my music library. I run Roon Core 1.6 on top of macOS Mojave (version 10.14.3). The Seagate is connected to the macbook pro via an Audioquest Jitterbug. The Macbook uses WiFi to connect to a 3 node Google Mesh WiFi network, not Ethernet.

Each Google WiFi node has dual-band WiFi (2.4GHz and 5.0 GHz), with each band having it’s own dedicated pair of aerials, which gives two spatial streams per band, meaning that on 2.4GHz there is maximum throughput of 400Mb/s and on 5.0 GHz, 867Mb/s is achievable.

Through this set-up I can seamlessly stream with no interruptions and no jitter DSD128 tracks. Each track is 1.07GB in size! When I used Tidal, I could do MQA first unfold, no problem on an incoming Tidal Hi-res stream without issue. I can also apply DSP correction (I don’t, but doing tests could easily do that too) at will.

All of this, whilst there are 30 other devices on the WiFi network, some on iPlayer and some network gaming.

So I don’t think we can be too hard and fast. Like all things, you need to plan each link in the chain as a system and understand where the limitations lay.

Have you enabled the Nova Roon Ready output device in Settings>Audio? 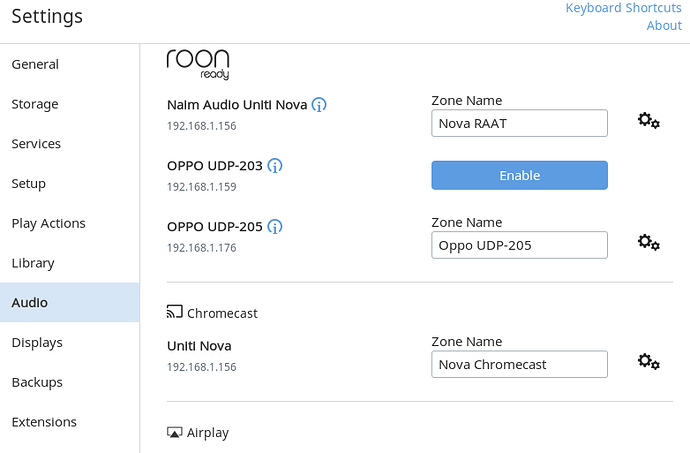 It won’t appear in Zones or be selectable unless Enabled: 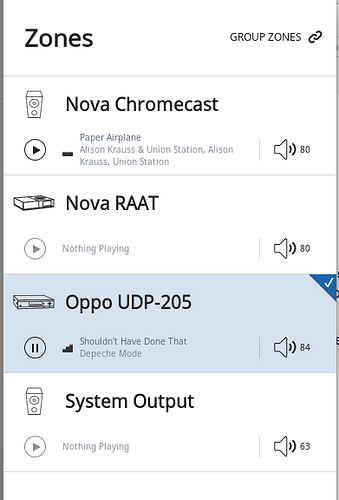 Also my Mac Mini works fine as a Core over wi-fi most of the time but I’d rather have a core on ethernet.

Hi @Alley_Cat yes worked my way through every menu setting more of out of curiosity.

Anyway gave it a shot, not for me, bubble UPnP is as good without being fussy aesthetics I find are not for me, but can see the reason why many like it.

Qobuz integration made Roon an essential for me - I’d had Roon long before this and used it intermittently, but now use it daily and barely touch the Naim app, perhaps as my Nova is in the Lounge/diner along with my Mac and I can easily control what I’m listening to via this.

I think it also lets family select stuff in a more user friendly manner than the Naim app as it removes hunting for servers on the LAN or using Chromecast from iOS devices and constantly changing output options from their Bluetooth devices to the Nova.

Appreciate it may not be for you for now, but maybe revisit in a few months or just have a play while the demo lasts - Roon’s radio is quite neat actually and brings up items I’d forgotten about/never bought but always wanted to explore (from Qobuz).

It’s possibly marginally overpriced for the annual subscription but it’s a drop in the ocean compared to our outlay on hifi electronics.

Considering Obsydians obsession with these high price fuses the outlay for Roon is peanuts.

Since using the Bubble UPnP route (app is agricultural but functional), i have never used the Naim app.

Considering Obsydians obsession with these high price fuses the outlay for Roon is peanuts.

Interesting isn’t it, we all use our libraries/media functionality differently.

Indeed I cant imagine life without Roon these days.It made everything come together in my home musically like nothing else.