In the reply dialog box you go to the cog at the far right end of the tool bar where you’ll fine a build poll option.

I read somewhere that B&O are offering factory rebuilds for there old (and beautiful) parallel tracking beograms of the 70’s and 80’s.

Naim are not mass market never have been. Their products are for the discerning tech-minded public or audiophiles. A Turntable may only have to ship in numbers of a few hundred per year in the market sector it would probably sit best in (probably out of my range lol). Maybe more than one model??

Even Technics reserected the SL1210. I think a Naim TT would have to either be direct drive or idler…no elastic band drives unless it’s via a proper toothed drive belt!

What a dream ! A Naim turntable…can’t wait!!

Jelco and SME have both quit the separate tonearm market. This suggests there’s not as much business at the high end as people might think…

There’s no doubting that Czech/German outfit (project) must be making a mint at the resurgence in vinyl but the R&D costs probably preclude Salisbury’s finest throwing their hat in the ring (or does it?)

Historically, the question of which sovereign state owns or occupies a country in that part of Europe has always been a bit contentious. For the record, Project is an Austrian company. In 2020, Austria has borders with Germany and the Czech Republic, but is not part of either of them.

I would also like to see a new ARO (or even a turntable) from Naim, but I am happy with my Rega RP6 for now. If I were looking for an entry-level turntable, Project and Rega would be at the top of my list.

Suggest they have a chat with Frank Schröder. He has an orphaned design that works very well, high torque with eddy brakes but not idler drive that fits in very well with Naim’s sound signature. a different motor and controller might be a good idea though, the brushed DC jobbie is a bit prone to wear and when it does the controller gets confused.

And it’s notable that SME and others are now focusing on ‘plug & play’ offerings, rather than having dealers and consumers having to work their way through the often time-consuming options of cartridge selection et al.

Outside of the hobbyists’ market (which I suspect defines most here - broadly!), people with large sums to spend tend not to want faff.

Can’t help myself to pick this nit: not German, Austrian

With so many other TT manufacturers, including pretty high end conventional on the current vinyl resurgence, and the need for the source to also include a cartridge, maybe if Naim were to consider getting in they could pick up the laser read approach (I think there was only ever one production model), and combine it with a disk cleaner, to give the best possible play without wear…

But personally I think the current wide popularity of vinyl is only a fashion thing, and within a decade it may have peaked and started dropping, to again only leave vinyl diehards buying upmarket playing equipment. Against that, streaming in one guise or another is likely to be here, mainstream as well as top end, for the foreseeable future so perhaps Naim’s energies would bd better spent designing streamers 1) to have complete immunity from artefacts introduced through connected data sources, completely obviating any need to worry about network, and 2) to make sound-quality beneficial use of DSP, e.g. to compensate for some room limitations (dsp cannot fix everything), and maybe allow dynamic “loudness” compensation for low level listening.

the current wide popularity of vinyl

And it’s not all that wide if we read the numbers in the Register article more closely. It topped CD mostly because nobody is buying CDs but streams instead if they chose digital.

Edit: although the actual numbers for vinyl are indeed more than one would expect. But a small market compared to streaming

Strange poll - I cannot see how to answer in the negative. It asks a closed question to which the answers can be either yes or no, but there’s no way to respond no.

Thinking about it, I don’t want Naim to introduce a new turntable that will further batter my stretched financial resources.

There was never so many turntables brand as today. It’s also the big return of direct drives and idler drives. So many choices.
Why a Naim, specially to have a Naim logo on it , for those who like to have only Naim products in their system?
The only interest for me would be if Naim could produce a really innovative turntable, that stands apart in the competition.
But not something like a McIntosh turntable, which is a Clearaudio with McIntosh logo. 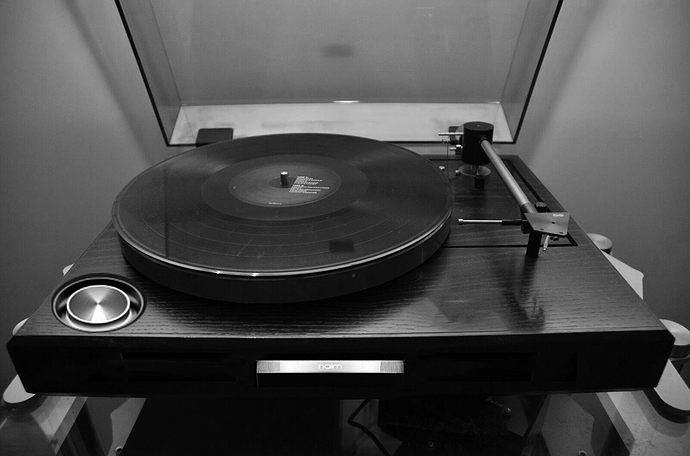 Here is why I think you have not seen a Naim TT & never will do:-

1 By the mid 1980’s Linn had proved that there was a relatively small (in the overall scheme of things) but, very lucrative, market for a high end turntable.

2 Naim had done the same for high end, expensive amplifiers.

3 If Naim wished to compete with the LP12 & produced a Linn equalling or exceeding TT it would not have doubled the size of the market. If Naim had taken 50% of Linn’s market then profitability of TT’s for both companies would have been severely reduced, perhaps to nil. Worse for Naim would have been a very expensive failure if their TT had completely failed to sell against the LP12.

4 If a Naim TT had been successful Linn may have hit back by trying to produce a range of super amps to take on Naim’s lucrative top end products & done to Naim what a Naim TT may have done to Linn.

5 Therefore best to keep the status-quo & concentrate on what each company did/does best.

6 Naim also no doubt noted the failure of the Linn Axis, perhaps in part being perceived by potential customers as being ho better than the top Regas of the day but at twice the price?

7 By the mid 80’s both companies would be realising that the future was digital & CD. Linn were happy to continue with the market dominating LP12 & Naim realising it was too late to consider a competitor & being happy to annoy Linn with the Aro & Armageddon, which I guess, sold in tiny numbers compared with Ittok/Ekos & Lingos.

8 Coming up to date, the vinyl revival has benefited Linn & extended the life of the LP12. New competitors have appeared & most are aiming sound & price-wise above the LP12 market & perhaps the only modern director competitor are the more expensive Regas. I believe the bulk of new vinyl converts are buying TT’s at the lower end of the market & very few will want to up grade to LP12’s, P10’s & beyond.

9 The streaming market is probably where most consumers will wish to be at some time or another & there is therefore a large enough market for Naim (to not need to concern themselves with TTs), Linn & a whole host of other competitors at all price levels.

I think my above points, 3 to 5, are largely proved by the car market up until the recent advent of the SUV. Everyone wanted to produce expensive, & very profitable, saloons to take on the established German big three. Despite many fine cars being produced by Jaguar, Volvo & the Japanese manufacturers, the world wide buying public largely ignored them in favour of the products from BMW, Mercedes & Audi.

In a rather smaller way (!) this is what I suspect Naim thought would probably happen to a Naim TT, no matter how good it was.

Can we have an separate question for Aro and another of TT please. You changed the question.

Good post. I suspect, but might be wrong, that Linn do not make much from selling new LP12s, although the margins must be decent.
However they appear to do good business selling new parts to existing owners who just can’t resist the temptation.