Just a question, is it possible to play older equipment through the analog inputs, say for example a cassette deck or a tuner etc. I appreciate that the Unity is typically a streamer but it is also nice to be able to play your own collection of music on whatever format.

I have read somewhere that the sensitivity of the analog inputs on the Nova are from 1 to 6V, this is obviously much higher than the output from tape decks and tuners etc which tend to be in the mV range.

Yes, you can play cassette decks, tuners etc through the Nova analogue inputs. If the volume level is high you can use the ‘input trim’ setting to reduce it to a similar level to other sources.

Yes, I have dodgy internet - and have a 30 year old NAT03 attached to mine

Ah but that’s the point you see, the output from an old school device is distinctly not ‘line level’, typically around 3-400mV so the volume would likely be low if anything.

That’s good to know, so my 40 year old reel to reel should be fine then

In addition to the trim control, you can adjust the input sensitivity of the analogue inputs in the Uniti range between 4 choices. Just go into input settings on the app and select the input you wish to adjust.

Thanks, what range of adjustment is there ? it would need to cover say 300mV upwards to match the output of an old cassette deck or similar. My Reel to Reel outputs 450mV to the playback outputs for example.

As Paul says, you can adjust the input sensitivity too. Remember that in most cases you don’t use the upper half of the volume range unless you listen at high volumes or have low sensitivity speakers, so if you need to crank it up a bit there should be plenty of headroom.

I’m sorry Chris but I am not seeing any definitive numbers in the answers here, I have quoted the output range of my device, I want to know if the Uniti can amplify such a small signal (450mV = 0.45V), it’s not looking promising so far.

The lowest input sensitivity setting is 0.5V so I can’t see it being a problem.

Is that the lowest number in the range (e.g. 0.5 - 1V) or a range that can be adjusted around (e.g. 0.25 - 0.75 with 0.5 in the middle). If it is the former then the signal from my RtR is too small to be amplified. The input sensitivity is the smallest signal which can be amplified by the pre-amp stage and remain within the stated specifications. 0.5 is larger than 0.45 so there could indeed be a problem, it should also be noted that 0.45V is quite a large output from a source, many are lower than that, to put things in perspective my NAC 82 has an input sensitivity of 75mV (that’s 0.075V). In fact that is how my system is connected at the moment and is not all that loud when I have the Tape source selected for output to the amp (NAP 250) and speakers (SBLs).

The lowest voltage input, labelled Portable/Phones is .5V but I suspect it can cope with a range of voltages. I suggest you try it out, the trim adjustment does give the opportunity to balance all inputs to the same (perceived)volume for a given value.

I don’t own a Uniti, I was only thinking about it, and judging by the answers here I don’t think it likely I will get one. If I understand it correctly, there are 4 inputs with individual sensitivity levels which may or may not be adjustable (or is it just that they are or can be set to different preset levels). There is also, if I understand it correctly, a trim adjustment available to avoid the need to change volume settings while switching through your sources, I believe that this is essentially a way to adjust the signal level from each source input stage such that the output to the volume control stage in the pre-amp is level for all of the sources and hence the volume is equalised. This is normally done by adjusting the higher level sources down to the lowest one.

So there is no point in discussing Trim here as that is not really the issue, if a pre-amplifier has a stated sensitivity (e.g. 75mV, 0.5V or whatever) then that is likely to be the lowest signal that can be amplified, or 0.5V in this case. I looked up the NAT03 and can’t find a manual or any specifications for it to see what the output is but the 02 was 375mV I believe, the 05 was 700mV so the 03 could be anywhere in between realistically but likely to be within the 0.5V range and therefore acceptable.

I was actually asking the question for a friend who already has a Uniti Nova and is buying a reel to reel tape recorder to play through it, it would have been good to know if it is compatible before he tries it but I guess that is the only way to know as actual information is so scarce.

Lastly, surely ‘Phones’ is an output, or was that a typo for ‘Phono’ ?

is it possible to play older equipment through the analog inputs, say for example a cassette deck or a tuner

The straight answer, which other have already given is yes. Nova is an All-in-one Player, not simply a streamer.

Bought nearly half a century ago, my tape machine replays just fine with Nova - doing so now!
Multimeter not needed for great sound.

actual information is so scarce

Naim are a highly skilled electronics company with a wealth of experience.
IIRC no one on the forum has ever suggested a lack of compatibility with their products, at least in the context of tape.

If your original question had asked if anyone had experience with using XYZ tape machine with Naim kit, there might be additional posts.
While peps here have given you informative answers, no one has previously mentioned using a tape machine.

There is a second question, which you didn’t ask, so I won’t answer it; save to say it is the most fundamental, for what you (or your friend who is welcome here), plan.

Each of the analogue inputs on the Uniti range can be switched between 4 different sensitivities.

Here’s a screen shot of the levels available 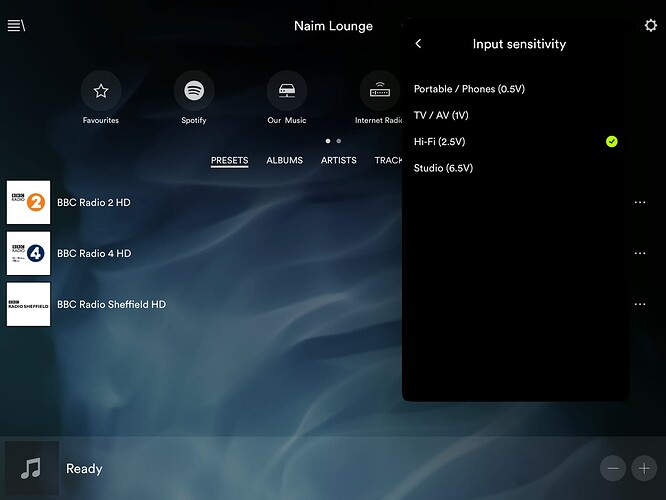 I think there’s a misunderstanding about „sensitivity“ here:
I understand the given levels (0.5V, …) as the expected peak level of the input. Not as in „the lowest signal the input can detect“.

From that point of view, 0.5 would already be tight for a system outputting 0.45V - you would not want a burst beyond that to avoid clipping.

If you want to connect a turntable player, you will usually need a phono pre-amp — that part is not included in the Unitis.

Looking at the answer immediately following yours (with the screenshot), I would say that the input sensitivities bear no resemblance to anything I have experienced previously (coming from an old-school olive series) where input sensitivities were quoted in mV not volts (typically 75mV). Where has anybody ever seen a level of 2.5V on a ‘Hi-Fi’ (apart from here obviously).

That you are playing a tape through it sounds promising (my OP did mention cassette so I at least mentioned it). I don’t recall mentioning a multimeter though or ever using one previously, mostly because analog hi-fi equipment tends to follow a fairly standard set of rules which most decent manufacturers tend to follow. So there is no need to quote a particular make or model of tape player unless it doesn’t follow this standard set of rules.

Thank you for not answering the other fundamental question, if you are alluding to getting something out of the Nova to record onto the reel to reel then I have had to assume that we would use the analog Sub/Pre-amp RCA output since no other option looks to be provided.

Your statement about Naim as a company is interesting but only that, when I bought my first piece of Naim equipment in 1988 they were innovative and generally sensibly priced, I don’t think that is particularly true these days looking at prices for their current products. Thank goodness though that they are able to maintain and service (to a degree) most of their legacy products.

Thank you, yes that is a good point, I had forgotten that input sensitivities were normally quoted as ‘peak’ meaning any more than that and the amplifier will be clipping the signal at full volume.

OK, so 450mV into the 0.5V/500mV input should be a decent match if the impedances are reasonably compatible, none of these are quoted sadly, yet another victim of the digital age.

Does anybody have any idea what level comes out of the pre-amp out stage ? as this might be a show stopper if too high as it is presumably not adjustable.