I’ve got a very early NAIT 1 which I bought in 1983. Now I’m thinking of sending it in to Naim for a service. However, I’ve learned that in the last revisions there was a change in value of a capacitor (see picture below) located near the power supply’s caps from 2200 µF to 3300 µF and that these NAIT 1’s didn’t sound as good as the earlier ones.

Is there anybody on this forum who know if Naim is changing value on this cap during service or not? I have mailed Naim but didn’t get an answer. 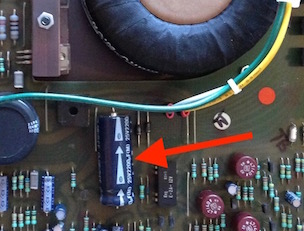 Or try giving Darran at Class A a call.

I have. No reply again.

I just looked at the service sheet for mine (Naim factory 2017) and the axial cap fitted was a 3300uF (it’s the section of the power supply that supplies the line and phono stage via the little 317Z reg). I’ll be interested in what you find (not that i’m changing mine - it sounds great)

@ james_n and Murmur. Interesting. Was that a NAIT 1 with red LED and white logo and if so what serial number? Mine is 10100. Very early i think.

I can confirm that Naim do indeed replace the 2200uF in the Nait 1 with the 3300uF which was fitted in the later versions of the Nait 2.

Despite being told by Darren that all serviced Nait 1s and 2s sound almost the same, the character of my Nait 1 remained the same post service. After all, it’s fundamentally still the same JV design with different output stage to the Nait 2. Prior to service, it occasionally sounded slightly out of tune but that never happens now. It has a slightly different character to my Green LED Nait. These differences remained the same after the service. But that’s just my experience based on the specific components that were replaced.

It thus appears that both Naim and Class A change the value of this capacitor at a service. I will mail them and ask for which reason they do this. I’ll come back here with their replies.

Well, now I’ve got replies from both.

Question:
I have learned that when you do a service on a NAIT 1 you change the value of a capacitor (se enclosed picture) from 2200 µF to 3300 µF. What’s the reason for this? Please be as detailed as possible.

Class A: We fit what Naim supply as their service specification for this amplifier.

Naim: The reason that this change is made is simply down to the fact that the 2,200 µF caps available today are just too small to fit in the space that then original would have occupied. So using the newer 3,300 µF capacitor means that both the space in the signal path is filled as it was before, and indeed the higher capacitance means that the preamp section in fact ends up having that bit more punch available to it. It’s as simple as that really.

Naim won’t have chucked any old spec components in. And Class A service to exactly Naim spec.

I’m not sure what you are worried about really.