Looking for a second system for the home office and fancy a chrome bumper amp. Just a simple set up so the amp will be at the cheaper end of the spectrum, under £1000.

How does the Nait 2 compare to some of the pre/power combos of that era? The Nait 2 seems to have a reputation for being really musical and fun which is what I am after and I like the one box idea. However, they don’t seem to be as prevalent in the second hand market so I am considering alternatives.

It is likely to be driving Neat Iotas and source will be a streamer of some sort (tbc).

I am looking for advice and comments comparing amps from the chrome bumper era rather than general second system advice.

Amps from that era seemed to be subject to a lot of sample variation so model designation is not always an indicator of absolute performance. If you could find a serviced CB Nait 2 then i’d settle with that. Otherwise a recently serviced 42 / 110, 62/ 110 or both of those with a 140 is what i’d look for. Stretching to a Hi-Cap would make the most of a 62 (or 42.5) or bring a 32.5 into the picture. For a second system with the Iotas, the simplicity of a pre-power (no psu) or the Nait 2 would be more appealing.

I’ll be interested in what you end up with.

I’ve owned various Naim amps over the years from my first amp the Nait 3 all the way to the 300 but the Nait 2 for me has real musical soul, hard to describe until you hear one but its hard to beat.

Currently my Nait 2 is connected to SL2s with a Chord Qutest/Node 2i as source, one could stop here.

The Nait 1 is the most musical amp I’ve heard, closely followed by the 2. However, whilst transparent, they have quite a ‘thin’ sound (a bit less so with the Nait 2) and also struggle to convey rock music unless connected to very high sensitivity / easy to drive speakers. So, yes, they have great rhythm and are more joyous than any other amp I’ve heard but there are serious limitations. I’ve tried various ‘more normal’ speakers (ELA, Kan, Keilidh, Tukan, Katan, M109, M140, Minstrel, Eden, Red 50, Larcs, Concept 20, AX-2, etc.) but they never really rock and I’ve always struggled longer term. It’s slightly less of an issue using a line level input than the built-in MM phono.

I’ve got (or had) various other CB Naim amps and a serviced 42/110 is a fine combo that will not have the same limitations but still be very enjoyable. I think the preamps sound better powered from unregulated amps but you should try a Snaps or Hicap for yourself anyway. I partner vintage Naim amps with vintage LP12 and Linn/Naim speakers but various members seem to have success with modern sources and speakers.

Murmur, be interested to know your preferred speakers with Nait, given you seem to have a similar judgement criteria to me. I’ve got a Nait 2 with SBL’s at work and find that’s great at low volume

Coincidentally, I’ve got the same right now but it’s only temporary since I’ve no spare MM 322 cards. They sound fantastic with undemanding accoustic music in particular, but again, the combo doesn’t do rock music and struggles with some pop too.

I think the Rega ELA are my favourite so far, followed by Keilidhs. Kans sounds amazing at times but only when the volume is up high and the Nait is often still struggling a bit. Kans were voiced for an 80s LP12 though.

That’s some really useful insight. Thanks.

With the 8" woofer on the SL2 the Nait2 produces enough bass for me also the Allaes sound great on the end of the Nait.

@Richard.Dane mentioned on another thread a few months ago about trying SL2s on the Nait2 with high end source and he was right, great combo.

A Nait 2 would struggle with the Iotas. They really need a bit of ommph to get the best out of them.

Something else to consider: I use a first version Unitiqute with a NAP 110 (which due to a certain type of rebuild will no longer power a pre but sounds very good) powering ls50’s in the office and it sounds very good. Depending where you’re at it should be a lot easier to source a used UQ for a decent price than a Naim 1 or 2. Then add an amp as you see fit or becomes available. Only issue with the UQ’s is the fading screen (and mine started doing it just as the five year warranty ran out, of course).

I am a huge fan of Iota Alphas and Nait 1 or 2. Here is the 1, But I ended up with 2. In my smallish room they really rock. I let both Allaes and Gurus go in favor of Neats incredible natural midband, tweeter and fuller bass. The Gurus had more punch and Allaes was more resolved but overall long term listening the Alphas was best in to my ears. 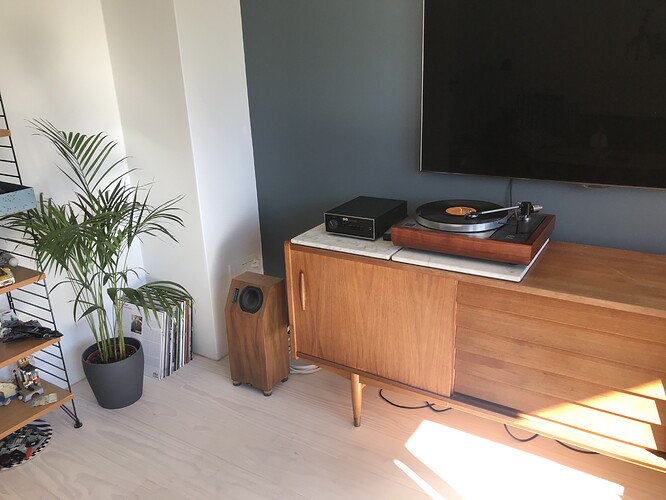 Probably my 2 most succesful pairings with Nait1 and Nait2, both in a small room… Nait 2 with Naim SL2, followed closely by Rega Ela with same Nait2. Secondly a pair of Quad Electrostatic ESL63 with a Nait1.

I hold both Naits in very high regard when partnered with the right speaker, better in fact than any Chrome bumper pre power combo with the possible exception of a 32/160 in fine fettle. There is something so engaging about the little Naits that just gets lost in an effort to add more power further up the line. Of course they run out of steam, even if they do it gracefully, when pushing difficult speakers hard. Presently i run a Nait1 into Linn Kabers in my small office and it pleases me immensly, even if its not quite as good as others i’ve tried. I’ve just tried the Nait1 on my newly acquired Kudos Titan 606 for fun with a CDS3, and guess what, it drove them pretty well.

I have the nait 2 driving the p3esr in my living room, but I just bought a pair of spendor sp3 / 1 which on paper should be easier to drive. I’ll be able to tell you the verdict in a week

Anyone have a view on the Nap90? I tend to like my music with a bit of oomph (rock, disco/house, jazz).

The 90 was the baby of the range, not best known for having lots of ooomph. Probably better to look for something with more power.

The original NAP90 is fine as far as it goes. However, considering what you would pay for a secondhand example compared to a NAP110, then I would definitely aim for the latter for just a bit more money, which will be much more to your taste. To listen to, the NAP110 is a one hugely fun, rhythmic and exciting little amp.

Murmur, be interested to know your preferred speakers with Nait, given you seem to have a similar judgement criteria to me. I’ve got a Nait 2 with SBL’s at work and find that’s great at low volume

I ran my CB Nait2 with my SBLs for over a year and was very happy too. I’ve now swapped it for 62/HC/160 and there is not much to tell them apart. I have a Nait1 with Rogers LS7T and they are magical together. I like change, just for the fun of it, but I’ve never been disappointed with this era of Naim.

My introduction to Naim was with a CB Nait2 on home demo (I had a McIntosh separates system at the time, ca 1985). I sold my Mc system after that demo and bought a 42.5/HC/140 with Karma phono boards and that was still a lot better. I never looked back.